You Are Here: Home → Israeli forces kill three Palestinians Tuesday, one a teen 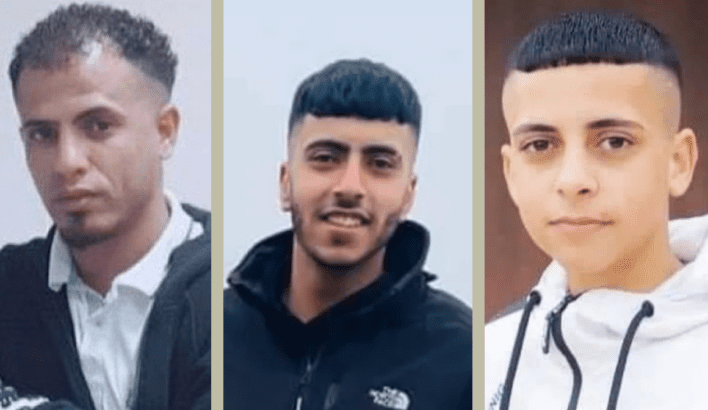 Israeli forces have shot three Palestinians dead, including a teenager, in separate incidents in the occupied West Bank and in the Naqab (Negev) desert.

In an Israeli raid on the sprawling Balata refugee camp in the northern city of Nablus early on Tuesday, 17-year-old Nader Rayan died after being shot in the head, chest and hand, the Palestinian health ministry said.

Three other Palestinians were wounded, it added, including one in critical condition.

A spokesman for Israel’s border police confirmed a Palestinian had been killed. “A terrorist fired at our troops who responded and killed him,” the spokesman said.

The Israeli raid on Balata resulted in the arrest of a wanted Palestinian, Ammar Arafat, who was arrested after his house was stormed by forces.

According to Palestinian media, Arafat was wanted by Israel for several months. His home was raided many times, and his family received threats that he would be killed if he did not turn himself in.

Confrontations broke out after his arrest, as Israeli troops and Palestinian gunmen traded fire.

The second death came in the Qalandiya refugee camp on the northern outskirts of Jerusalem.

Alaa Shaham, in his twenties, was killed by a bullet to the head, the ministry said. Six other Palestinians were wounded by live fire.

Qalandiya hosts the main checkpoint between annexed East Jerusalem and the West Bank.

Raids by Israeli forces into overcrowded refugee camps are frequent and often result in deaths, and are seen by Palestinians as a means of maintaining Israel’s occupation.

Excluding East Jerusalem, the West Bank hosts some 475,000 Israelis who live in settlements regarded as illegal by the international community.

In the town of Rahat inside the Naqab desert, an undercover Israeli unit posing as Palestinians killed 27-year-old and father of three Sanad Salem al-Harbed.

In a statement, the Israeli police said there was firing at its undercover unit, which was in the town to arrest two suspects.

The Israeli unit “neutralised the gunman who posed a threat” and no casualties were sustained, it said.

The police said they found a gun and ammunition, and published a photo of what they said was a pistol in al-Harbed’s possession.

An undercover Israeli police & a Shabak unit raided a home in Rahat, the Naqab, this morning. 27 year old Sanad was shot dead & another was arrested. Palestinians everywhere, regardless of the color of their ID are a target of Israel’s bloody settler colonial regime. pic.twitter.com/I4EwjSrM1a

The Naqab is home to 300,000 Palestinian Bedouin citizens of Israel, the majority of whom live in “unrecognised” villages. As a result, they suffer from a lack of basic services such as water and electricity, in stark contrast to neighbouring Jewish towns.

Palestinian political parties condemned Tuesday’s killings. In a statement, the left-wing Popular Front for the Liberation of Palestine (PFLP) said, “Comprehensive resistance is the most effective way to resist the Zionist enemy.”

“The continuation of our people in confronting the Israeli occupation forces in the Palestinian camps, villages and cities is a call to unite more in the face of this continuous Zionist aggression,” PFLP said.

In a statement posted on his Facebook page, Hamas spokesman Abdullatif al-Qanou said, “The blood of the martyrs will continue to fuel our people’s revolution against the Zionist occupier.”

Editor’s note: While Palestinians most often use nonviolent resistance, e.g. this; just as in Ukraine, armed resistance against the occupying power is both common and legal under international law.

OTHER PALESTINIAN DEATHS AT THE HANDS OF ISRAELI FORCES in 2022: