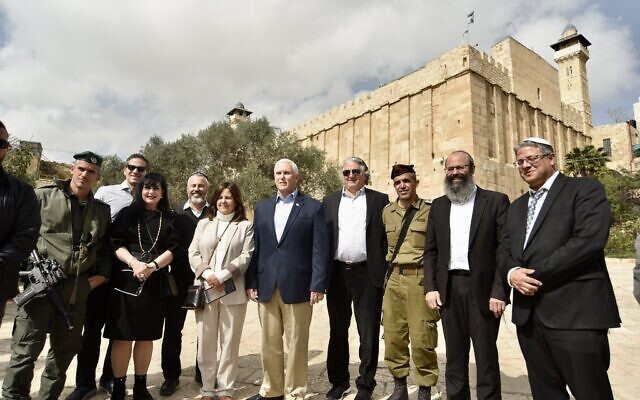 Former US vice president Mike Pence outside Hebron's Tomb of the Patriarchs on March 9, 2022. MK Itamar Ben-Gvir is at far right. (photo source)

Hungry for campaign money, former VP Mike Pence went to Israel to pay tribute to billionaire Miriam Adelson, and met with Israeli extremists who endorse violence against non-Jews, are hostile to “accursed Christianity,’ and have been connected to a movement banned as a terror organization…

Adelson (an Israeli dual citizen) & husband Sheldon gave more than half a billion dollars to Republican campaigns, party organs, and interest groups during the past five U.S. election cycles...

By Allison Kaplan Sommer, reposted from Israeli newspaper Ha’aretz [notes below in italics, addendum, title, and some photos added by IAK]

Former Vice President Mike Pence visited Israel this week, and while his visit made little headlines, on Wednesday he did manage to draw public attention after touring the West Bank city of Hebron with two of Israel’s most notorious right-wing extremists, MK Itamar Ben-Gvir and far-right activist Baruch Marzel.

Pence, whose visit appeared to be laying the groundwork to shore up evangelical support* in the 2024 presidential race, said it was a “great honor” to meet Ben-Gvir, the ideological successor of the late Rabbi Meir Kahane, whose Kach movement was banned from running for the Knesset and is considered a terror organization by the U.S. government. Ben-Gvir shook Pence’s hand and told the former vice president about how he was “battling against our enemies.”

[When Rabbi Kahane was in the Israeli Knesset, he introduced a law decreeing: “Non-Jews will be obliged to assume duties, taxes and slavery.” It failed to be adopted.]

Great honor for @KarenPence and I to travel to Hebron today to visit the Tomb of the Patriarchs and Matriarchs at the Cave of Machpelah that Abraham bought to bury Sarah nearly 4,000 years ago. pic.twitter.com/3Krdda3SUl

“That’s what I heard,” Pence replied. “Stay strong. We’ll stand with you.”

Both Ben-Gvir and Marzel made their names as leaders in the far-right, anti-Arab Kach movement. Today, Ben-Gvir leads the Otzma Yehudit party and was elected to the Knesset in 2021. As an attorney, he has represented suspects in Jewish terror cases and hate crimes.

He first became famous when, a few weeks before the November 1995 assassination of Prime Minister Yitzhak [by a Jewish extremist] Rabin, he appeared on television brandishing a Cadillac emblem stolen from Rabin’s car and issuing a threat: “We got to his car, and we’ll get to him, too.”