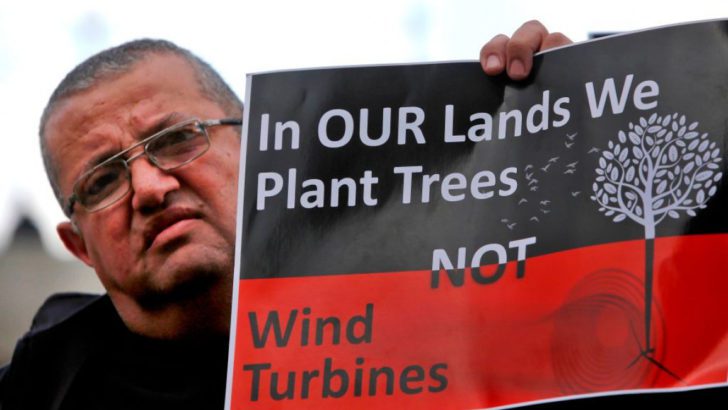 A man holds up a protest sign during a demonstration by Druze residents of the village of Majdal Shams in the Israeli-annexed Golan Heights against Israeli construction of wind turbines in the territory.

Syrians in the occupied Golan Heights protested an Israeli project that will see their farmland confiscated to make way for a wind farm.

Dozens of Syrians in the occupied Golan Heights protested on Monday outside the courthouse in Nazareth against an Israeli plan that could see thousands of acres of their farmland seized to make way for a wind farm.

The project, led by the company Energix, would see scores of wind turbines constructed on land in the occupied Golan Heights, a border region between Israel and Syria – two-thirds of which has been illegally occupied by Israel since 1967.

The project would see locals in three villages – home to nearly 25,000 people – lose thousands of acres in agricultural land.

The approval for the plan hinges on the court’s decision, which will reach a verdict on 15 March.

“We object to giving this company the license to implement their project because of the harm their turbines will cause,” Dr. Youssef Abu Saleh from Majd Al-Shams, the largest village in the Occupied Golan told The New Arab’s Arabic-language service.

“We support clean energy and the conservation of our environment, but the damage done by these turbines is far higher than their benefit. Their goal is to seize our lands and confiscate our livelihoods.”

Emil Massoud from the People’s Committee Against Turbines said they have been resisting the project for years, and petitions to the court have been signed by more than 5,000 locals.

“The project will take away […] a quarter of our agricultural land, which is the main source of our livelihood,” he added.

The Golan Heights is a region of Syria that has been militarily occupied by Israel since 1967.

Israel has constructed a series of settlements and construction projects in the region to further annex the region and bring it under its administrative control.

Israeli has been repeatedly accused of using seemingly environmental-friendly projects and endeavors to distract from its occupation of the West Bank and oppression of Palestinians in a process known as “greenwashing”.

ESSENTIAL READING ON ISRAEL AND THE ENVIRONMENT: