You Are Here: Home → Israel to demolish home of 95-year-old disabled Palestinian woman in Negev 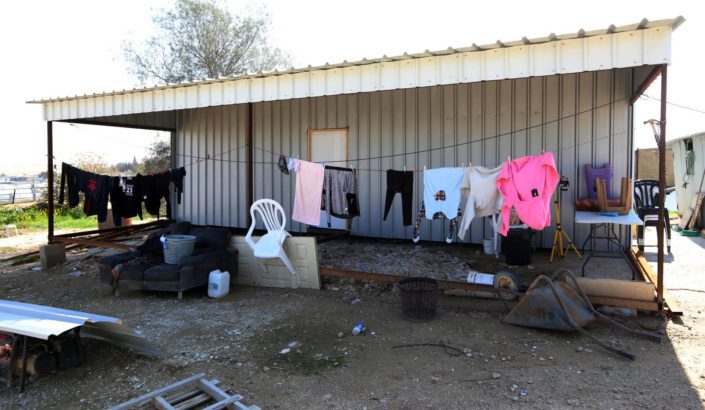 Israel is set to demolish the home of a 95-year-old Palestinian woman in the Negev desert after her makeshift house was being restructured to help it become wheelchair-friendly. Israel’s Enforcement Unit stated, ‘Demolitions are issued against buildings, not people’

The Israeli government has issued a demolition order of the home of a 95-year-old physically disabled woman in an unrecognized Bedouin village in the Negev.

The order was issued even though the woman’s shack is built on the ruins of the old house where she had lived for the last 15 years in order to make it wheel-chair accessible.

The National Unit for Enforcing Planning and Construction Laws said it has been informed that this is a humanitarian case, and it will decide whether to implement the order after receiving documentation that proves this.

Jasia al-Azazma lived in her old home in Wadi al-Na’am until a few months ago, when her medical condition worsened. Since she had to start using a wheelchair and a hospital bed, her family decided to demolish the existing home, which they said has become unfit for human habitation, and move her temporarily to her daughter’s home while a new, shack was being built.

Her son-in-law, Yusef al-Ziadin, said the old home was built during Yitzhak Rabin’s administration about 25 years ago, when the government’s policy was not to demolish illegally built houses. “A shack like this can’t last more than 20 years, and it had holes everywhere; all the rain was pouring on her,” he said. “It was falling apart and we couldn’t leave it like this.”

Al-Azazma, he added, needed to be wheeled to the shower and to bed, but the doors were too narrow.

But work on the new home was stopped after the demolition order was issued last week. The Enforcement Unit deemed it “new construction,” and therefore high-priority for demolition.

The unit said there hadn’t even been a floor at the site before the new home was built-proving the construction was new. However, when Haaretz visited the site, a concrete floor belonging to the old home was clearly visible.

“Our mentality is that we don’t take elderly people to nursing homes,” Al-Ziadin said. “So when my wife’s mother stopped being independent, she came to live near us.”

The original goal had been to return her to her own home as soon as it was rebuilt, “but now we have a problem,” he continued. “I don’t know what we’ll do or how long she’ll stay like this.

“You can’t leave someone in bed or in one place all the time; it’s despairing. A person also needs to go outside and see the world.”

In 2017, the cabinet approved an enforcement plan for illegal Bedouin construction that prioritized demolishing new buildings. The goal was to encourage residents of unrecognized villages to move to recognized communities, but that was never achieved, partly due to a housing shortage in recognized towns and the lack of a developed rental market.

The number of demolitions, however, rose from a few hundred a year to more than 2,500. The Regional Council for Unrecognized Villages in the Negev says that in almost all these cases, the construction took place inside existing compounds or adjacent to them, so no additional land was taken over.

In 94 percent of cases, Bedouin demolish the buildings themselves after getting a demolition order, since if they wait for the government to do it, they will be charged for it, and the price is high – usually between 30,000 and 40,000 shekels ($9,300 and $12,400). Fearing criminal proceedings and wishing to spare family members the trauma also constitute reasons for the self-demolitions.

The combination of the shortage of rental housing and the fear that new construction will be razed has resulted in more people crowding into existing homes.

“I have a son I need to marry off, but I’m not doing so, because even though I have a courtyard, I can’t even build a tent in it,” said Najib Abu Baniya, 53, an activist in the Wadi al-Na’am local council. “My older son, who did marry, is already living with me. And I can’t even replace the roof, even though it leaks,” for fear of a demolition order.

“The authorities wait for you to replace a roof, add a room,” he continued, “and then they come and slap you with a demolition order. They even demolish homes that are 40 or 50 years old.”

The Enforcement Unit said in a statement that “The demolition orders are issued against buildings, not people.” When the unit discovered Al-Azazma’s house, the statement adds, the building had no floor, no interior and was uninhabited. But after it issued the demolition order, police informed it that this was a humanitarian case. Documents proving this are slated to arrive in the next few days, after which a decision will be made on whether to carry out the order.