You Are Here: Home → Israel holds thousands of Palestinian prisoners in solitary confinement despite health risks 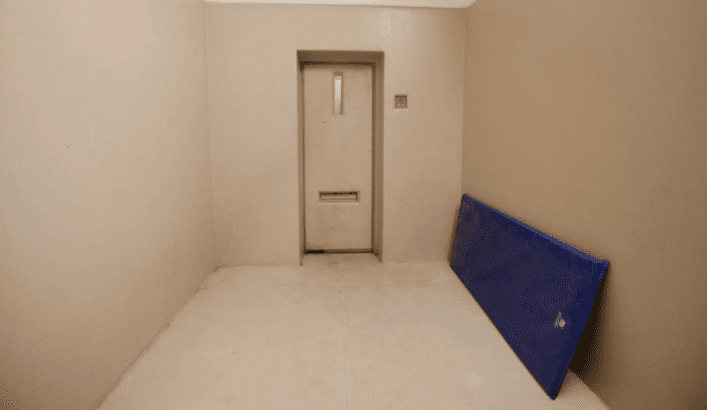 Home away from home for too many Palestinian prisoners of Israel (Pictured: a solitary confinement cell in Israel’s Ayalon prison.)

Physicians for Human Rights reports that thousands of Palestinian prisoners in Israel are held in isolation, some are women and children, and some for years at a time – likely a breach of the Convention against Torture.

by Chen Maanit and Josh Breiner, reposted from Ha’aretz, February 24, 2022

The Israel Prison Service holds thousands of Palestinian prisoners in isolation, including minors, for months and even years, according to figures obtained following a freedom of information request filed by the NGO Physicians for Human Rights.

According to figures provided by the prison service, in the first ten months of 2021, 1,587 inmates, among them 66 minors, had been held in complete solitary confinement. In that same year, by the end of August, another 1,134 prisoners, 53 of whom were minors, were held in “individual seclusion,” or “two-person seclusion.”

In prison service terminology, “solitary confinement” refers to situations where an inmate is confined alone for a period that is not to exceed 14 consecutive days. “Seclusion” is defined as a practice used when there is a danger to the prisoner, the security of the facility, state security or to prevent drug smuggling. However, Physicians for Human Rights claims that “seclusion” is just another term for solitary confinement and that it has the same negative impact on prisoners, regardless of the varying terminology.

Isolation is an extreme step, which courts have ruled should be used only in rare instances. There are three circumstances that warrant isolating a prisoner: While a prisoner is under interrogation, as punishment for disciplinary infractions, and solitary confinement in the form of “seclusion” when the prison service or another agency requires it.

Generally, inmates are secluded without a cellmate only when explicitly requested by the prison service, the Shin Bet security service or the police, because the prisoner poses a danger to others or when the inmate requests it out of fear for their own safety.

The preliminary decision to place a prisoner in isolation for a period of up to six months is made by either the prison commander or the deputy district commander. A further period of seclusion must be approved by a special committee whose members include police officers, social workers, prison service personnel and medical personnel. The decision then requires the approval of a judge. Individual seclusion may be extended by six month periods, and two-person seclusion may be extended once a year.

“Seclusion” goes beyond occupying a cell alone (or with one other inmate). Secluded prisoners are hermetically separated from the prison’s general population, including yard time, meals and any other activities in the facility. The wings used for seclusion are often completely separated from the rest of the inmates.

“The prison service is holding hundreds of [Palestinian prisoners] in solitary conditions, with full knowledge of the destructive impact it can have on their health,” says Anat Litvin, who oversees the department for incarcerated persons within Physicians for Human Rights.

In 2017, Israel’s Supreme Court ruled that incarcerated persons, “are not stripped of their human rights, and they do not lose the liberties accorded to every human being by virtue of their status as such, unless this is required to fulfill the purpose of the incarceration. The prison walls are not a ‘normative black hole,’ within which there are no human rights or protections.” Nevertheless, the figures show that the prison service still makes extensive use of solitary confinement and seclusion.