You Are Here: Home → Israel and Russia are two peas in a pod

Israel and Russia are two peas in a pod 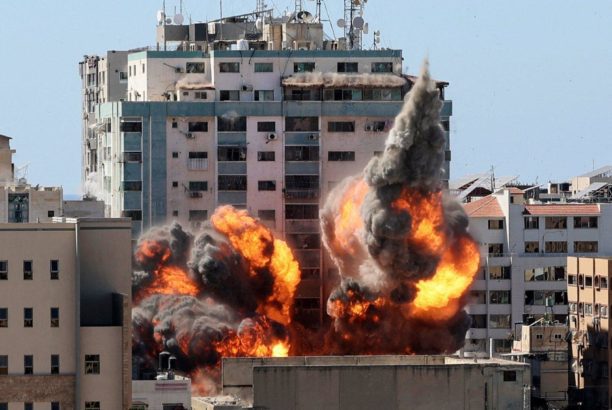 Israel’s bombing of Al-Jalaa Tower in Gaza on May 15. Israel claimed, but never offered proof, that Hamas had offices in the building.

Russia is following Israel’s playbook to the letter. The difference: Russia will be a global pariah; Israel always acts with impunity – and U.S. politicians continue to give it over $10 million per day of Americans’ tax money.

by Gideon Levy, reposted from Ha’aretz, March 1, 2022 [Addendum below article and photos added by IAK]

Russia’s justification for an invasion, the propaganda and the lies, seem taken from Israel’s playbook every time it invaded Gaza or Lebanon. Israel always feels threatened, just like Russia, and both deny the national rights of the people it occupies. The Ukrainians are not a people, and neither are the Palestinians. Israel has an ancestral right to the West Bank, and Russia has a similar right to Ukraine – and in the eyes of both, this means the mendacious right to sovereignty. The demonization is also similar: The Ukrainians are Nazis, the Palestinians are terrorists; these are both propaganda lies.

The comic relief in this accursed war was provided by Foreign Minister Yair Lapid: “The Russian attack on Ukraine is a serious breach of international order,” he said. Lapid, it seems, feels no shame in those words. Could it be that his self-awareness has run so low, or perhaps it’s cynicism, hypocrisy and double standards that have reached new heights?

The world opposes and is shocked by the invasion of Ukraine. It opposes and is shocked no less by Israel’s occupation. The fact that Israel thumbs its nose at decisions by the international community places it in the same category as Russia and denies it the right to criticize. The difference: Russia will apparently become a pariah and be penalized by harsh sanctions. Israel has never been punished for its aggression, and has paid no price for ignoring the decisions of the international community.

The right-wing in Israel is now criticizing the West, which is not offering assistance to Ukraine. Did Israel ever imagine helping another country in wartime, except sending field hospitals, always a nice photo-op? Are there any Israelis who would agree to their young people fighting for Ukrainian justice? If not, how can we demand this of American, French or German parents?

The attitude in Israel to violent opposition to occupation screams with double standards. The actions of the Ukrainian people against occupation are not only legitimate, they are even heroic. No one imagines criticizing a young Ukrainian who throws a Molotov cocktail at a Russian tank. Israel will cheer, as that youth deserves. That young person is a hero and a patriot.

And what about the young Palestinian who does the same thing? He of course should be killed, he was born to kill innocent Jews, he’s an animal, cruel and despicable. Why does the Israeli heart go out to the Ukrainian refugees and the victims of horror and fear there, but is indifferent to the suffering and the fear in Gaza and the expulsion of Palestinians who are refugees?

Russia has promised that it does not intend to occupy Ukraine and will only strike military targets. That sounds frighteningly familiar. Russia demands the demilitarization of Ukraine and the replacement of its regime. Aren’t that exactly what Israel demands from Gaza before it embarks on another round of unintentional killing of hundreds of children? Even the support for the war in the Russian media is reminiscent of something. And after all this, Israel should join the world and condemn Russia? How?