You Are Here: Home → A chronicle of Israeli actions against Palestinians in 2021

A chronicle of Israeli actions against Palestinians in 2021 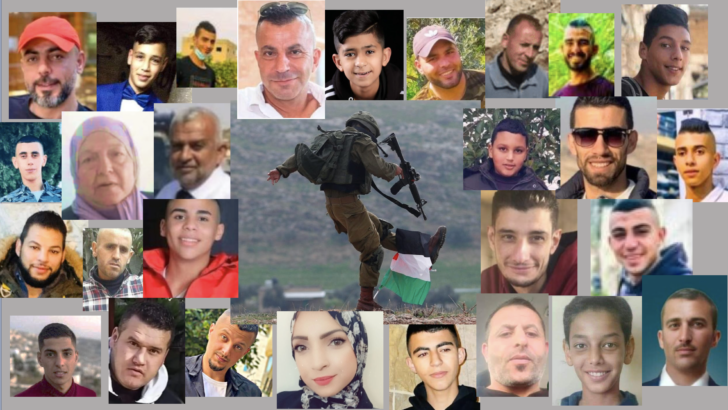 For Palestinians, it was another year of Israeli brutality (pictured: a few of the hundreds of Palestinians killed by Israel in 2021)

Israel has outdone itself in 2021 – destroying large swaths of Gaza, shooting to kill Palestinian protesters, endangering Palestinian children, and more. Here is a rundown of the year’s violence – with hopes that together, we can work to bring justice and peace in 2022.

2021 has been quite a year for all of us, marked for many by several significant events.

If Americans Knew has posted or reposted roughly 300 articles so far in 2021, covering the situation in Israel-Palestine and news relevant to the region. Some of the major events included Israel’s attack on Gaza and aggressions in Jerusalem and Sheikh Jarrah, Israel’s designation of Palestinian human rights organizations as terrorist entities, and two recognized human rights groups’ recognition of Israel as an apartheid state.

No one knows better than Palestinians themselves that, in between these major stories, Israeli oppression has been ongoing and crushing.

Headlines and data don’t paint a picture of the lives lost, childhood ruined, homes decimated, and dreams deferred – but perhaps, by surveying this year’s news, we can get just a hint of the magnitude of Palestinian suffering and tenacity.

Let’s not forget that behind each statistic and headline is a family that has lived through several generations of grave injustice.

The vast majority of the losses on both sides happened during Israel’s attack on Gaza in May: 260 Palestinians and 7 Israelis* were killed (66 Palestinian children, 2 Israeli children). One Israeli paper reported that Israel’s military dropped 80 tons of explosives in one 40-minute campaign.

Here are some If Americans Knew headlines on the situation:

* besides the 7 Israelis listed on IAK’s Israel-Palestine Timeline who were killed by Gazan rockets, another 3 died as a result of falling on their way to take shelter; 3 non-Israeli foreign workers were also killed.

Israeli forces killed about 28 Palestinians (4 children) amid escalating settler and military violence during the Muslim holy month of Ramadan (mid-April to mid-May). Palestinians were shot or attacked while praying, protesting, driving, and walking in Palestinian East Jerusalem, the Palestinian neighborhood of Sheikh Jarrah, and even inside the Al-Aqsa Mosque. 2 Israelis were also killed. Over 6,800 Palestinians were injured and 3,100 were arrested.

A few articles from IAK covering this period:

Since 1967, Israel has imprisoned more than 700,000 Palestinians from the occupied territories (West Bank, Gaza, and East Jerusalem).

In 2021, Palestinian prisoners experienced great suffering; several conducted high-profile hunger strikes, holding on for months before Israel finally acquiesced to their modest demands (some are still striking at this moment).

In addition to the 77 Gazan children who died at Israel’s hands in 2021, at least 17 more Palestinian youths were killed in the West Bank and East Jerusalem. In many cases, they were shot in the head. This tragedy is unspeakable, of course – but we must speak about it if we expect to make Israel stop this bloodshed.

On a smaller scale, but more widespread, are the daily indignities that Palestinian children must endure, simply because Israel is allowed to get away with it.

Here are just some of the headlines IAK posted this year, calling attention to the slaughter and abuse of Palestine’s innocents:

It’s no secret that Israel is a world leader in spyware – which has been used worldwide against people advocating for democracy. Saudi journalist Jamal Khashoggi was targeted using software developed in Israel.

It remains to be seen whether Israel will be held accountable for this, like its other wrongdoings, by justice-loving people and nations.

IAK told you about the issue in these and other articles:

2021 saw a major spike in Israeli settler violence against Palestinians. In many cases, Israeli forces either stood by or even assisted the settlers in their attacks. But while multiple organizations have reported on this disturbing trend, the Israeli government has not felt the need to do anything about it.

It is generally accepted that settler violence is an integral, if informal, component of Israel’s effort to ethnically cleanse Palestinians from parts of the occupied territories.

Here are a few 2021 posts from If Americans Knew about settler violence:

Palestinians living in Gaza have struggled constantly to get medical care for 14 years. Israel has blocked the entrance of medicines, medical supplies, and equipment. This is bad news all the time, but during Israeli attacks, these shortages are particularly catastrophic – and even magnified as Israeli bombs destroy hospitals and clinics and kill doctors.

Palestinians living in the West Bank and East Jerusalem have their own set of Israeli-imposed health issues.

Just a few of the stories that IAK shared this year:

Recent weeks have seen a targeted attack by Israel against Palestinian human rights organizations: PM Bennett accused 6 well-known orgs have having ties to terrorism – a tactic that Israel has used for years to demonize and delegitimize groups that report on things Israel would rather keep secret.

Israel has also been harassing or imprisoning individual activists and journalists.

Not only do Israel’s military and police use lethal force as a first resort, they also have the admiration and support of their government in doing so.

Here are some of the too-many stories you heard here in 2021:

CORPORATE AMERICA, MAINSTREAM, AND SOCIAL MEDIA SIDE WITH ISRAEL

Not always, but all too often, Israel partisans pull strings and manage to perpetuate Israel’s innocence myth in various arenas. (IAK has reported for years about mainstream media’s pro-Israel bias – see this and this and this, for example).

Here are a handful of the many stories If Americans Knew has shared with you this year on this issue:

US GOVERNMENT’S WAR ON JUSTICE AND PEACE FOR PALESTINIANS

It’s bad enough to know Palestinians are enduring all this oppression from Israel – but the horror reaches a whole new level when we remember that our government is bankrolling these atrocities – over $10 million every day. Our Congress members are actively supporting this regime using our tax dollars. (And we typically expend an additional $10 million per day on projects because they benefit Israel.)

Here are just a few of the many ways our government have been perpetuating Israeli human rights abuses this year:

Israel couldn’t get away with murder like it does, without the help of its great team of devotees. They don’t just solicit money – they influence foreign policy, trample on Americans’ right to free speech, and dictate politicians’ responses to Palestinian suffering. How do they do it? Simple: nobody is holding them accountable.

A few of the many achievements by friends of apartheid Israel:

The stories, sadly, never seem to end – although If Americans Knew dreams of the day when a just peace comes to the region.

Here is a sampling of the various other issues that we addressed in 2021:

Palestinians are not without agency. 2021 has seen a huge number of weekly protests throughout the West Bank, demonstrations in East Jerusalem, and several weeks of protests by Gazans. Resistance against occupation is legal – even armed resistance is compatible with international law, though the vast majority of Palestinian resistance is unarmed.

Here are a few examples of Palestinians taking on Israel in 2021:

AMERICAN AND GLOBAL ALLIES OF JUSTICE FOR PALESTINIANS

Worldwide, there is a large contingency of Palestinian rights supporters. We have yet to gain the upper hand over Israel’s propaganda machine, but 2021 was a year of progress.

Here are a few positive stories that If Americans Knew brought you this year:

It’s clear to see that Israel and its allies are determined to keep a boot on Palestinians’ necks – but times are changing.

“Apartheid” has become a common term to describe the situation. Americans’ love affair with Israel is declining. Especially after the slaughter in May, attitudes are shifting. This is great news.

But we know from experience that when the Palestinian narrative begins to find acceptance, Israel doubles down on its efforts to silence the truth-tellers (for example, IAK has struggled mightily against bot attacks on our website throughout the year).

And we know that Israel is stirring up trouble on other fronts besides Palestine – bombing Syria, pushing the US toward war with Iran (as it did with Iraq – read this), inserting itself in African politics (this), pushing its agenda in Europe.

Bottom line is: If Americans Knew is committed to justice and peace for the long haul. We hope you will join us. Please share our posts, talk about the Palestinian struggle, contact your Congress members, and support us financially if you possibly can.

We thank you for partnering with us in this worthy cause.