You Are Here: Home → Boycotting Russia is compulsory, while boycotting Israel is punished

Boycotting Russia is compulsory, while boycotting Israel is punished 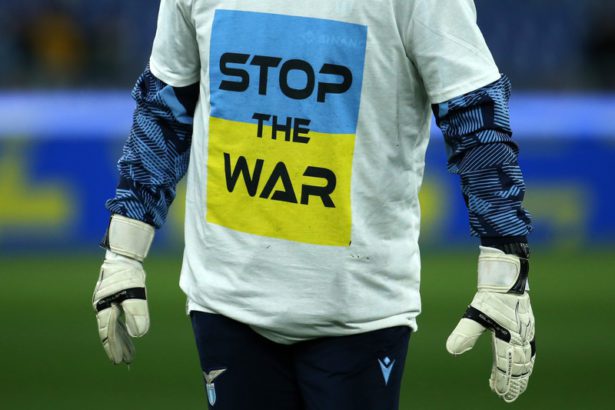 Boycotting and sanctioning Russia is widespread: Italian football club SS Lazio’s coach wears a t-shirt that reads “stop the war” during the warm-up for a match on 27 February 27 2022 in Rome, Italy.

Boycotting a country accused of aggression in violation of international law is suddenly a moral obligation – but apparently only as long as it is Russia. Many of the anti-Russia measures are being implemented by the very same organizations that repeatedly ignored or rejected Palestinian calls to sanction Israel, their oppressor.

Calls to boycott Russia are everywhere. As the invasion of Ukraine dominates headlines, there have been sweeping moves to exclude Russia and Russians from sporting and cultural events.

That comes on top of massive sanctions by the United States, Canada and European countries on Russia’s financial system, economy and airlines.

The immediacy with which Russia has become a pariah in the sports world is a slap in the face to Palestinians who have seen teams and federations cross their boycott picket line, supposedly to keep politics out of sports.

And in sharp contrast to Russia, the US faced no such exclusions or sanctions after it illegally invaded Iraq in 2003.

Boycotting a country accused of aggression in violation of international law has suddenly become justifiable and even a moral obligation – but apparently only as long as it is Russia.

Astonishingly, many of the anti-Russia measures are being implemented by the very same organizations that repeatedly ignored or rejected Palestinian calls to sanction Israel, their oppressor.

Kicked out of World Cup

World football governing body FIFA and European football federation UEFA announced on Monday that Russia’s national and club teams would be indefinitely banned from all competitions.

On Sunday, FIFA expressed its “condemnation of the use of force by Russia” and “deepest solidarity” with Ukrainians.

It also announced “initial” measures including barring Russia from hosting competitions or participating under its country’s name.

But even those severe punitive measures weren’t enough. FIFA came under fire for not excluding Russia from the World Cup entirely.

FIFA bowed to pressure, imposing the total ban that will bar Russia from this year’s World Cup.

Palestinians have long demanded that FIFA sanction the Israel Football Association because of its inclusion of Israeli teams based in West Bank settlements and Israel’s attacks on Palestinian athletes.

All of Israel’s settlements in the occupied West Bank, including East Jerusalem, and Syria’s Golan Heights are illegal under international law and are considered a war crime.

In fact, FIFA’s own rules prohibit national associations from playing on another member’s territory without permission, which is precisely what Israel does in the occupied West Bank.

Despite this, FIFA never heeded those calls or forced Israel to compete without its flag and national anthem or play exclusively at neutral venues.

FIFA brags about how it expelled South Africa when it was under its white supremacist apartheid regime.

Yet, today, even as major global human rights organizations have concluded that Israel perpetrates the crime against humanity of apartheid and called for sanctions, FIFA still refuses to take action.

Meanwhile, Roman Abramovich, the owner of Chelsea Football Club, handed over “stewardship and care” of his club to the trustees of its charitable foundation.

Abramovich, who is Russian but took Israeli citizenship in 2018, was not included in an initial British government list of sanctioned Russian nationals.

The British government is promising to add more names to the list, but is being accused of dragging its feet – a delay that could potentially allow targets to move or conceal assets.

“I do worry about the government moving so slowly that its prey escapes it,” David Davis, a former minister, said Tuesday.

“We need to target oligarchs who own football clubs that many of our citizens can no longer afford to attend,” Davis added, naming Abramovich in particular.

Davis said in Parliament – where he is immune from any lawsuit for defamation or libel – that Abramovich “is one of the men who manages Putin’s business affairs.”

Notably, Abramovich’s spokesperson said the billionaire was sought out by the Ukrainians “for support in achieving a peaceful resolution.”

It is not clear what that entails, however, or whether this claim is simply an attempt by Abramovich to stave off sanctions.

It is curious however that Abramovich has never faced opprobrium or calls for sanctions for things he is known to have done: The billionaire previously contributed more than $100 million to Elad, an Israeli settler group that takes over Palestinian land and homes in occupied East Jerusalem.

This means Abramovich is directly aiding and abetting Israel’s occupation and colonization of the city that even the British government decries as a violation of international law.

Chelsea is known for the rampant racism and anti-Semitism of its fans.

The International Olympic Committee paved the way for boycotts last week when it called on all international sports federations to relocate or cancel events in Russia and Belarus.

Belarus, which neighbors Russia and has hosted peace talks in recent days, is closely allied with Moscow.

And sports federations are heeding the call.

The European Curling Championships scheduled in Russia later this year will be relocated.

The International Ski Federation announced that all World Cup-related events this year will be canceled and Russian athletes will be barred from taking part.