You Are Here: Home → The irony of a McDonald’s boycott in Tel Aviv

The irony of a McDonald’s boycott in Tel Aviv 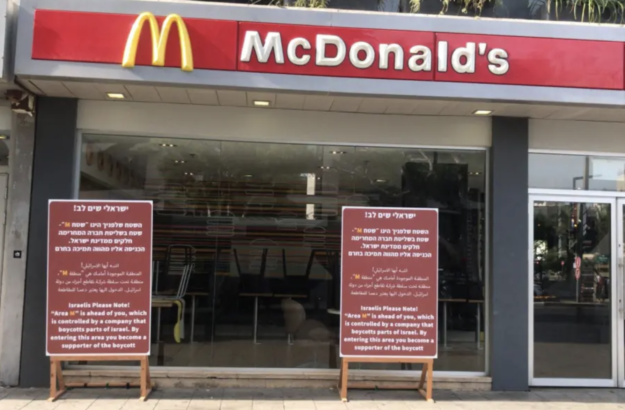 Signs outside a McDonald’s in Tel Aviv protest the refusal of the local franchise to open in Judea and Samaria.. (photo credit: MAARIV)

Israeli settlers protest the “unlawful” boycott movement playing out in their midst by calling for a boycott of their own.

The Jerusalem Post reports that Israel’s Ben Gurion International Airport, in its search for a new fast food restaurant, has invited McDonald’s to join the bidding process.

This decision met with resistance from the IDF (Israeli Defense Forces) Veterans Forum and Israeli settlers because of past actions by Israeli Jew Omri Padan, the owner of the Israeli McDonald’s franchise.

Padan has for years refused to open branches in Jewish settlements in the Palestinian West Bank: he rejects the presence of these so-called “Jewish communities,” which are considered by international law and most of the world to be illegal. In 2013, Padan’s franchise refused to open a restaurant in Ariel, an illegal settlement of 20,000, sparking anger and accusations of discrimination.

When the IDF Disabled Veterans Forum heard that Padan was bidding for space at Ben Gurion Airport, they organized a protest, placing signs outside McDonald’s locations in Tel Aviv which read – in Hebrew, English, and Arabic – “Israelis please note! ‘Area M’ is ahead of you, which is controlled by a company that boycotts parts of Israel. By entering this area you become a supporter of the boycott.”

McDonald’s Corporation has not taken a position on BDS (Boycott, Divest, Sanction), the movement that calls on international civil society organizations to support initiatives against Israel similar to those applied to apartheid South Africa.

Currently, there are calls urging Israeli leaders to implement Israel’s Boycott Law against Padan. The legislation was designed to punish actors both in Israel and abroad that choose to boycott Israel or “any area under its control” – referring to settlements.

The Disabled Veterans org called Padan’s practice “despicable,” and stated, “Omri Padan must understand that his ideology has a price.”

Where the irony comes in

Not only is boycott of Israel and “Israeli-controlled areas” – the illegally occupied West Bank and Gaza –against Israeli law; the Israel lobby is pushing for legislation in the US and in Europe that would criminalize the use of boycotts against Israel.

But while pro-Palestinian justice boycotts are being systematically outlawed around the world, pro-Israel boycotts such as the one against McDonald’s are in full swing.

Israel’s Ministry of Strategic Affairs issued in 2018 a “blacklist,” which declares a boycott-type ban on 20 international organizations, denying them entry to the Jewish state.

In the days of apartheid in South Africa, Israel was an ally of that country, benefiting from arms sales and secret collaboration in nuclear weapon development. Israel refused to answer the call of a worldwide boycott, a movement that eventually brought an end to the racist regime.

The pattern suggests that Israel considers boycott permissible only when it works in Israel’s favor.