You Are Here: Home → The Protest Dispersed. Then an Israeli Sniper Shot a 9-year-old Boy in the Head. 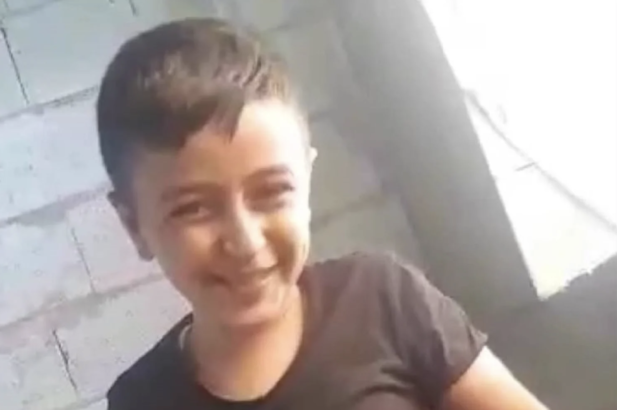 From 100 meters away, an IDF soldier shot a Palestinian boy in the head in the West Bank village of Kafr Qaddum. The bullet exploded into dozens of fragments in the child’s brain and he’s now in an induced coma. (See this Timeline on all Palestinian and Israeli deaths since 2000.)

by Gideon Levy and Alex Levoc, reposted from Ha’aretz

In the freezer of their home in Kafr Qaddum in the West Bank, the family is preserving the last memories they have of their youngest child: a chocolate-banana popsicle and a piece of watermelon on a toothpick. Abd el-Rahman Shatawi had bought them about half an hour before an Israel Defense Forces sniper knelt on the slope of the rocky hill overlooking the village, and from a distance of 100 meters fired one live round into the 9-year-old’s head. The bullet exploded into dozens of pieces of shrapnel in his brain.

Shatawi is now in the intensive care ward of Safra Children’s Hospital, at Sheba Medical Center, Tel Hashomer. He is in an induced coma and is hooked up to a medical ventilator. His father and a cousin don’t leave his bedside for more than a few minutes, hoping for a miracle. But it’s unlikely that this boy will ever be able to enjoy the treats he bought.

Footage from the security camera of the grocery store where he made his purchases last Friday captured the disturbing moments before the shooting: Abd el-Rahman is wandering between the shelves of candy and the ice-cream freezer, trying to decide what to buy. A little boy in flip-flops, a T-shirt and sweatpants. That’s also how he looked to the IDF shooter, peering through his sophisticated optic sights, before squeezing the trigger.

After depositing the frozen treats in the freezer at home, Abd el-Rahman had gone to stand at the entrance to his friend’s house at the edge of town. Although the focal point of the weekly demonstration in town was not nearby – the soldier took aim, fired and hit the child in the head.

At 1:15 P.M., the demonstrators set out from the center of Kafr Qaddum; according to the organizers, there were 300 to 400 people. This month, the stubborn protests entered their ninth year: Every Friday and Saturday, residents march toward the road leading into their village, which has long been blocked off by the IDF to accommodate the neighboring settlement of Kedumim. Their goal is to protest the takeover of their lands by Kedumim, and the closing of the road.

Last Friday they had proceeded for about 10 minutes, when a few dozen soldiers emerged, spreading out in a wide swath, from among the olive trees nearby. It’s a weekly ritual. But this time, according to the demonstrators, the troops fired with greater intensity than usual, using rubber-coated metal bullets and stun grenades. The shooting began at 1:25 and continued for about 20 minutes, while young people from the village set tires ablaze and threw stones at the soldiers from a distance.

The dramatic turning point, although the IDF has denied it, occurred at 1:30 P.M., when the soldiers switched to live fire. Why they did so isn’t clear – none of them was in mortal danger, certainly not the sniper lurking high on the hill. The villagers saw the bullets fly and lodge in the walls of houses and water tanks, puncturing the latter so their contents streamed out, and they were seized by fear. The soldiers used automatic fire, dozens of bullets at least, they say.

Murad Shatawi, coordinator of the demonstrations and one of the village’s leaders, shouted to the young people at the head of the protest to back off. The demonstrators call their protest nonviolent; their strategy is to sustain minimum losses. The fact is that no one has been killed here in the last eight years, apart from an elderly man who suffocated from tear gas in 2014.

The protest leaders were certain that as soon as the soldiers saw that the villagers had retreated, they would stop shooting. But the troops kept up their fire. At about 2 P.M., Murad heard shouts: “A boy has been killed!” He ran toward the site, which was an offshoot of the main demonstration, involving a few dozen youngsters.

Riad Shatawi, 45, was sitting in the shade of an olive tree near the road and the protest with his 11-year-old twins, Halfi and Mohammed. Abd el-Rahman stood behind them, near the house of his friend, Ezz. Riad, a Palestinian Authority police officer, recalls seeing four soldiers on the slope of the hill across the way – three standing and one in a sniper’s crouch. About 100 meters separated the troops and Riad and his sons, on the street below. He grabbed the boys and fled with them as fast as they could. Abd el-Rahman was left alone, standing just a few meters behind them. He certainly could not have posed a mortal danger to anyone, says Riad.

Riad didn’t manage to warn Abd el-Rahman about the sniper, and a split second later he heard the sound of a shot from the direction of the hill. Turning around in horror, he saw the boy fall on his side, blood streaming from his head. He rushed over and, together with another villager, Nisfat Shatawi, picked him up and screamed hysterically for help from a Palestinian ambulance parked nearby, as at every demonstration.

This week we saw bloodstains smeared at the site where the 9-year-old had been shot, along a concrete path and dozens of meters of road, where he had been carried to the ambulance. Nisfat now climbs high up on the rocky slope, to show us where the soldiers were – far off, well up the hill.

The shooting continued even after the boy was hit, we were told. The bullets struck the tin fences and the walls of houses. We saw the holes they made.

Abd el-Rahman was “like a sack,” Riad says now – unconscious, not responding. The head of the local council, Samir el-Kadumi, a nurse by profession, accompanied the boy in the ambulance that sped toward Rafadiya Hospital in Nablus. The chief surgeon, Dr. Othman Othman, rushed the boy into the operating room to try to stanch the serious intracranial bleeding revealed by the CT scan.

Yasser, Abd el-Rahman’s father, was summoned urgently from his job in Tira to the hospital, where he and the villagers who’d gathered there were told that dozens of bullet fragments, between 70 and 100, were now dispersed in the boy’s brain. In Kafr Qaddum they’re convinced that this is a new and particularly nasty kind of ammunition.

The IDF Spokesperson’s Unit this week issued the following statement to Haaretz: “Last Friday a disturbance developed in Kafr Qaddum with the participation of about 60 Palestinians, during which tires were burned and stones were thrown at IDF forces present at the site.

The IDF troops responded with crowd-dispersal means that included stun grenades and the firing of rubber [bullets]. In the course of the event, a Palestinian minor was wounded. The incident is being investigated by the commander. At the conclusion of the investigation, the findings will be transmitted to the military advocate general’s office for further examination.”

Says Murad Shatawi angrily: “If you think that this type of soldier can defend you, you are mistaken. Soldiers without ethics cannot defend you. The sniper assumes his position. There are burning tires, there is stone throwing. But what is the meaning of the fact that the soldier chooses to shoot a little boy – that is the question. Why a child? The soldier can’t claim that he missed his target. The IDF also cannot claim that the sniper did not see the boy or that he did not know he was shooting at him. If he had the minimum amount of morality, he would at least have shot him in the legs. But in his head? They want to harm our children. They have already shot them with Rugers [0.22 mm bullets]. But this is the first time they have fired live ammunition at a child’s head. They have fired tear gas into houses, knowing that babies and old people were inside. But shooting a child in the head with live ammunition is something we haven’t seen here.

“I know what the IDF’s message is,” continues Shatawi. “It wants to stop the demonstrations by shooting our children. But they have not understood our message. Thousands of Palestinian martyrs have fallen, and nothing has changed. We will continue our struggle, because the occupation must end today. Not tomorrow. We are human beings, we love life. We don’t want to breathe gas and we don’t want to die. We have educated and raised our children; their place is not on the battlefield. We love them. We love knowing that they will grow up and become teachers, doctors, engineers. A child is a child, here and in Israel. Your children plan their weekends – whether they will go to the beach or on a hike. We only plan how to protect our children. You might ask: Why do you allow your children to take part in demonstrations? And our answer will be: Help us to end the occupation.”

Yasser, 54, and his wife Aida, 50, have three sons and three daughters; Abd el-Rahman is the youngest. Yasser works in a bakery in Tira. Aida has had her share of suffering: She was in a serious accident a few years ago and underwent open-heart surgery about two weeks ago. Since her son was shot she has closeted herself at home, weeping constantly, unable to be at his side in the Israeli hospital. Her husband looks totally shattered as he sits by the boy’s bed, day and night, with the child’s adult cousin, Umar.

Abd el-Rahman is in room 9 in the new part of the Safra ICU. The sights here are unbearable, but the design is very impressive. The director of the ward, Prof. Gideon Paret, smiling and exceptionally welcoming, says that there is hope for the boy. This week he moved his legs. A resident physician from Hebron is treating him.

Meanwhile, the child’s head is swollen and a seemingly endless number of tubes are stuck into his young body, which rises and falls in rhythm with the mechanical ventilator.

A Timeline of all Israelis and Palestinians killed in the conflict