You Are Here: Home → Intensifying injustice: capital punishment in Israel 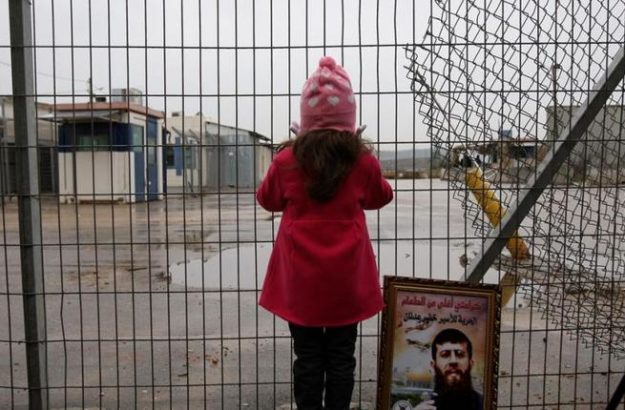 Maali, daughter of prisoner Khader Adnan, stands next to a picture of her father outside a prison. (AFP/Abbas Momani)

As Israel considers adopting the death sentence for Palestinians, it is worth recalling that under occupation, Palestinians already face harsh injustice and that such a law would be illegal according to international law. The examples of Elor Azaria’s 9-month prison term for killing an unarmed, injured Palestinian at point-blank range, and Ahed Tamimi’s 8-month sentence for slapping an IDF soldier, indicate that the Israeli “justice” system is already severely lopsided.

The US and Israel share many imaginary values: both like to think of themselves as peace-loving, justice-pursuing democracies, built by the perseverance of pioneering immigrants.

The two countries have some actual shared values too: for example, in election season, their leaders openly pledge allegiance to the far right among their voters and disregard the rights of powerless minorities.

Just as Trump has vowed to drive away asylum seekers in our hemisphere, Netanyahu and his administration have worked to flush out African refugees in Israel. And while Trump has no use for Black Americans, Netanyahu disdains the Palestinian population.

But, thanks in great part to US support that includes $10 million a day in military aid, the Israeli government gets away with some particularly shocking moves.

Case in point: close on the heels of its racist Nation State Law, Netanyahu’s right wing government is working to make the death penalty – for Palestinians – more accessible.

In the words of Saad Nimr, Palestinian professor of cultural studies at Birzeit University in Ramallah, “You have a trial where the judge and the prosecuting attorney are all Israeli army officials…The officials deciding your fate are essentially your enemies.”

Jewish citizens of Israel – even those living in West Bank settlements – are tried by civil courts under their own set of laws. They are judged by fellow Jews, their peers and advocates.

Israeli military courts prosecute Palestinians charged with “security violations” and breach of a host of military orders and other laws. Some of the laws that Palestinians live under would be considered unconstitutional in the US.

“In addition, the order deems any acts of influencing public opinion as prohibited ‘political incitement’.’”

Israeli military courts also widely use administrative detention, a procedure whereby prisoners can be held indefinitely, without charge or trial, based on secret evidence. International law dictates that this practice should be used only sparingly.

The crime of killing an Israeli is currently punishable by death only in military court, and only in the event of a unanimous decision by 3 the Israeli military judges overseeing a case.

The last time Israel carried out an execution was in 1962, when Nazi war criminal Adolf Eichmann was hanged.

Significantly, Israeli civil court, where Jews are tried, abolished the death sentence in 1954.

The proposed bill would reduce the required approval from a unanimity of 3 judges to a majority of just 2, enabling Israeli military courts to execute “terrorists” convicted of murder more easily.

According to Addameer Prisoner Support and Human Rights Association, if the bill is passed, its practice will be a breach of international law:

Under the International Covenant on Civil and Political Rights, Article 6, the death penalty cannot be handed down in instances where a fair trial has not been guaranteed. The military court system has been broadly demonstrated to not be meeting the international standards of a fair trial, and therefore cannot hand down the death sentence.

Israeli military courts have self-reported a conviction rate of 99.74%; rights groups have labeled them “kangaroo courts.”

These are the courts hoping to get easier access to the death sentence.

Israeli Defense Minister Avigdor Lieberman has insisted that the capital punishment bill would be a strong deterrent to Palestinian “terror,” and is eager to see its passage.

Shin Bet chief Nadav Argaman, on the other hand, is unequivocally opposed to capital punishment. He believes it is ineffective in fighting “terrorism.”

PM Netanyahu was also against the bill – until recently.

He has just thrown his support behind the bill, in a move that Al-Monitor describes as a typical response “when he sees one of his ministers outflanking him on the right and fears being portrayed as weak” on terrorism.

Netanyahu’s explanation for his change of heart was that “under radical circumstances, simple logic is involved. Those who slay and laugh will not get to spend the rest of their lives behind a prison wall, but will be executed.”

Israel is holding elections in 2019.

No one in the Netanyahu government or the electorate seemed to mind the soft touch afforded to Elor Azaria in 2017. Azaria, an Israeli soldier, shot and killed an incapacitated, unarmed Palestinian man in the head at close range. The incident was caught on video; clearly Azaria was not in any danger from the man lying motionless on the ground.

Yet he was sentenced to just 18 months for manslaughter. When the court announced the guilty verdict, Israeli civil society was outraged. (“How could a soldier be convicted for his actions during combat?”) When the 18-month prison sentence was handed down, Palestinian civil society and human rights groups were infuriated. (“This will not deter other trigger-happy soldiers.”)

Azaria’s sentence was later reduced to 14 months; when he was released after just 9 months, he declared, “I have no remorse whatsoever.”

Palestinian “lawbreakers,” Ahed Tamimi and others

In December 2017, Ahed Tamimi, a teenaged girl, gave a fully-armed Israeli soldier a slap on the cheek. The incident was filmed and went viral. (Tamimi lashed out at the soldier because he had, a short time before, shot her cousin in the head.)

Defense Minister Avigdor Lieberman commented on the incident, “The IDF is the most humane army and operates under values that do not exist anywhere else. But its humanism can’t come at the expense of its deference and power…Everyone involved, not only the girl but also her parents and those around them will not escape from what they deserve.”

Tamimi was abducted from her home in the middle of the night, indicted on five counts of assaulting security forces, and, after a plea bargain, was sentenced to 8 months in prison.

Defense for Children International reports that since 2000, at least 8,000 Palestinian minors have been prosecuted in Israel’s military courts.

With a justice system already this lopsided, in the words of Addameer, “This [capital punishment] bill represents the continuation of a policy of systematic discrimination against the Palestinian people, In a situation where the occupying power has final say over their rights, the move towards mainstreaming the death penalty represents a grave infraction on the humanity of the Palestinian people.”

Other human rights groups have also denounced the bill.

It is entirely plausible that, if enacted against a Palestinian population that is fed up with occupation and oppression, such a policy could backfire: hopelessness and marginalization are often a recipe for backlash.