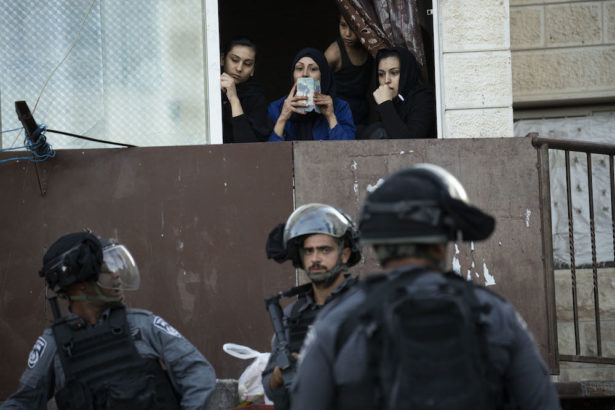 Palestinian women look on during a raid by Israeli police in the East Jerusalem neighborhood of Issawiya, July 1, 2019. (Oren Ziv/Activestills.org)

For the past six weeks, Israel has been sending paramilitary police forces to raid the East Jerusalem neighborhood of Issawiya every evening. The raids, a severe form of collective punishment, have left one young Palestinian dead and hundreds wounded.

by Aviv Tatarsky, reposted from +972mag

It’s 5:30 p.m. and some 10 large police vans rumble into the East Jerusalem neighborhood of Issawiya. The next few hours will follow a strict script: the vans stop in a central place in the neighborhood — a mosque, a commercial area, or a main junction. Dozens of paramilitary police officers roll out and stake out positions around the block.

The word “police” is misleading here. Some of them are soldiers belonging to a Border Police unit, while other belong to the special police squad which is designed to put down riots and stop terrorism. They refer to themselves with the same term used to describe combat soldiers rather than law enforcement officers.

What are dozens of hyper-militarized officers doing inside a neighborhood of East Jerusalem? Which Bin Laden did they come to catch today? Sometimes what’s more important than any analysis is the understanding that this is the occupation — that looking for any other explanation misses this banal yet crucial point.

They stand there, rifles drawn. Women, children, and impatient teenagers have to brush against them on their way to the store or a friend’s home. Cars are randomly stopped while the officers inspect their documents, causing long traffic jams.

The police vehicles simply block the junction so that for long periods of time drivers — coming back home from work or on their way to a wedding — are completely stuck and cannot go anywhere. Day after day, Issawiya’s 20,000 residents clench their teeth and try to ignore the armed raids that have been occurring for the past six weeks. Most of the time, they show incredible restraint. Most of the time, however, it seems the riot police themselves are trying to start a riot.

This is more or less what has been taking place in since June 12. The raids are unprecedented and nothing like I have ever witnessed in all the years I have been working in East Jerusalem.

It’s not that Israel is shy about collective punishment. In 2014 and 2015, when a wave of Palestinian violence shook Jerusalem, Israeli authorities used violent measures that targeted hundreds of thousands of innocent East Jerusalemites. But even then, nothing came close to this.

What more, the term “collective punishment” is probably not applicable to the events in Issawiya: I have found no reports of violence originating from Issawiya that could – according to the logic of the occupation – be the reason for Israel’s violent campaign against the neighborhood.

Which begs the obvious question: why is this happening?

Indeed, police spokespersons have reputedly told journalists that the raids are a result of large riots. “We are fighting terrorism so that it doesn’t slip into West Jerusalem,” one journalist was told. When the Israeli NGO Ir Amim, which focuses on turning Jerusalem into a more just and sustainable city, sent a letter to the Jerusalem Police district chief demanding that he put a stop to the raids, this was the response the organization received:

In recent weeks hundreds of riots and severe incidents of violence took place in Issawiya. These targeted Israeli police as well as Israeli civilians driving on the highway to Ma’ale Adumin. They included firing live ammunition, throwing Molotov cocktails, shooting fireworks, and throwing stones, and resulted in the injury of Israeli civilians. Israel Police will continue to act against terrorists.

Yet the facts tell a different story. Israelis wounded by live ammunition or Molotov cocktails would have made headlines in Israel. But there have been no such reports for many months before or since the police raids began in June. Indeed, despite the six weeks of ongoing raids, the police have not confiscated a single weapon, nor has any Issawiya resident been arrested and accused of involvement in such activity. It is very rare that Israel – with everything it invests in Palestinian collaborators and other forms of spying on the civilian Palestinian population – is not able to point to a single perpetrator of violence against Israelis.

Wanting to make sure, I made a few other inquiries. Extreme right-wing groups rigorously document incidents of Palestinian violence, and the footage often serves to incite violence by Jews against Palestinians, as well as to put pressure on Israeli authorities to take a hardline approach. Despite the many dozens of incidents of violence from East Jerusalem and the West Bank – including stone throwing to stabbings and shootings – the documentation does not mention Issawiya before the raids began. I also spoke with people living in French Hill and in the settlements who use the highway next to the neighborhood. They said that no recent incidents had caused alarm in their communities.

But when trying to “find a reason,” there are one should look in other directions. Instead of asking why the police are doing this, one could ask why the police and the Israeli government are able to continue to wage this campaign for six weeks? How is it possible that the Israeli public is not demanding an end to this?

Israeli activists have been coming to Issawiya on a daily basis, and together with local residents are documenting the police violence. In the first couple of weeks the presence of Israelis seemed to cause the police to act with a measure of restraint. This daily solidarity – not without its own risk – has allowed human rights workers to report in great detail what has been taking place in the neighborhood. At the end of the day, however, the political influence of these activists remains marginal.

Honest media reporting would have put the police in an uncomfortable position. While the press often does this in cases of police brutality towards ultra-Orthodox Jews or Ethiopian-Israelis, in Issawiya, and apart save from rare exceptions, the Israeli media has either kept silent or served as a mouthpiece for the police.

One must also wonder what exactly is Israel trying to achieve through this unending and deadly campaign. To offer an answer one should zoom out and look at the larger picture of what is taking place in Jerusalem.

The campaign against Issawiya signals a new stage in Israel’s oppressive policies in East Jerusalem, and is part of the overall change in Israeli policy toward the Palestinians with the backing of the Trump administration.

In the past, Israel primarily focused on settlement construction in the eastern part of the city. By building so-called “facts on the ground,” the government intended to make it as difficult as possible to draw a border along the Green Line and create two capitals in Jerusalem. Today that focus has dangerously shifted to breaking apart Palestinian Jerusalem.

Israel is pouring hundreds of millions of shekels into projects that will take over large parts of the the Old City and its surrounding neighborhoods, while fragmenting Palestinian territory and jeopardizing the Palestinian population. Neighborhoods such as Silwan, A-Tur and Sheikh Jarrah have seen an intensification of home demolitions and evictions on the one hand, while on the other the municipality has built promenades, heritage centers, and other tourist attractions for the Jewish settlers living inside Palestinian neighborhoods .

Meanwhile, Israel is aiming to redraw the city’s municipal borders so as to push 120,000 Palestinians — more than a third of the city’s Palestinian population — out of the city. According to legislation advanced last year by Jerusalem Affairs Minister Ze’ev Elkin, neighborhoods such as Kufr Aqab, Ras Hamis and the Shuafat refugee camp — already separated from the rest of the city by the separation wall — will be drawn out of the municipal boundaries.

Issawiya, then, portends what Israel has in store for the remaining Palestinian neighborhoods of Jerusalem: continual violence that has no aim other than oppressing and making life miserable for all who live there.

Aviv Tatarsky is a researcher at Ir Amim and is active in solidarity activities with Issawiya organized by Free Jerusalem.

Jerusalem: The Not-so-eternal Capital of the Jewish People