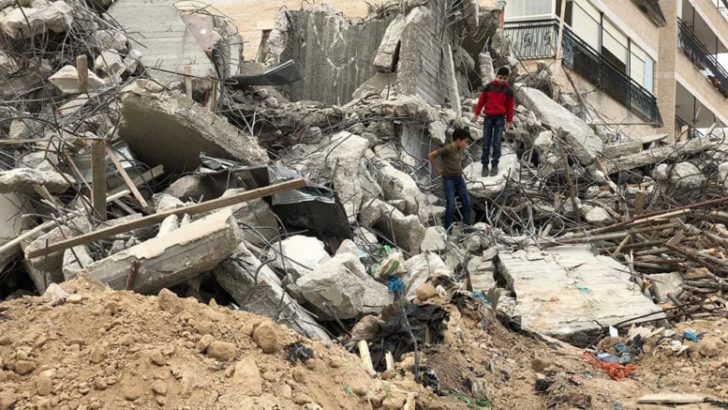 A succession of Israeli demolitions this month has left dozens of Palestinians homeless – with winter approaching – or without work. Let’s make our legislators aware of and accountable for this never-ending travesty.

On Tuesday, November 6, 2018, Israeli authorities demolished a Palestinian-owned home in the Jerusalem neighborhood of Beit Hanina. The home belonged to the Rajabi family. One family member collapsed during the demolition and was transferred to the hospital. According to the family, 12 people, including five children, are now homeless.

The same day in Silwan, Israeli authorities demolished a shop that belonged to Mohammad Odeh. According to the family, three families depended on the shop for work and income.

On Wednesday, November 7, 2018, hundreds of Israeli municipal workers, police and security units, along with three bulldozers, entered Shua’fat Refugee Camp to demolish a Palestinian-owned building. Israeli police set up flying checkpoints throughout the area and stationed themselves on nearby Palestinian homes. They then forced residents out of their homes and demolished the structure entirely.

The building consisted of four floors, which included a parking level and 12 apartments. The owner of the complex, Mahmoud Jaradat, explained that he had attempted to stop the demolition order in Israeli courts. Israeli authorities, however, rejected his attempts, claiming that when he built the structure a year and a half ago he did not secure Israeli construction permits.

On Thursday, November 8, 2017, Israeli authorities demolished a home that was under construction in a-Za’ayem in the outskirts of the Jerusalem district.

On Monday, November 19, 2018, Israeli forces demolished a Palestinian-owned mobile home in Qalandiya village in the Jerusalem district. The United Nations Office donated the temporary home to Ali Mteir after Israeli authorities demolished his home in June.

The same day, members of the Israeli Nature and Parks Authority razed a plot of land and confiscated a tent and vehicle in Jabal al-Mukkaber. The land belongs to Khaled al-Zayer. Israeli forces also demolished warehouses that belonged to the Sari family as well as a shop that belonged to the Obaidat family in the village.

Palestinian neighborhoods in Jerusalem are the target of Israeli settlement plans, which aim to link four concentric circles of settlements, starting with the Old City, followed by the “Holy Basin” (Silwan, Sheikh Jarrah, a-Tur, Mount Zion, and the Kidron Valley), Jerusalem’s annexation border, and finally the West Bank.

Action Alert: send your member of Congress to learn about impact of cuts to UNRWA