You Are Here: Home → Christians in Jerusalem’s Old City ‘under threat’ from settlers 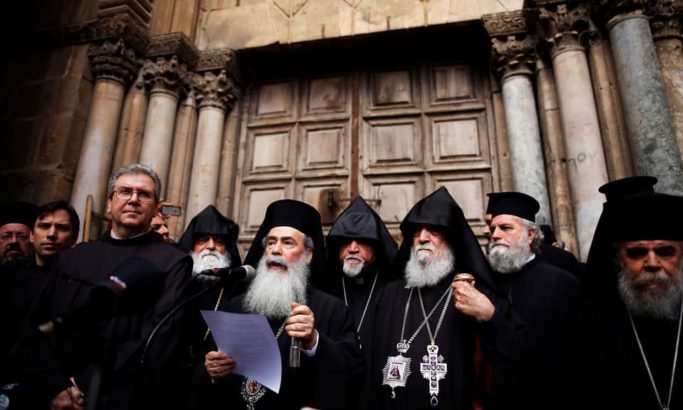 The Greek Orthodox patriarch of Jerusalem, Theophilos III, speaks in front of the closed doors of the Church of the Holy Sepulchre in Jerusalem’s Old City. Photograph: Amir Cohen/Reuters

Church leaders in Jerusalem are fighting Zionism on three fronts: settler groups are vandalizing and destroying church property, as well as covertly buying up land to increase the Jewish presence in the Old City; Jerusalem’s city council is demanding $200 million in back taxes from churches allegedly using property for commercial purposes; and possible expropriation of church land.

If you wish to support their call, phone Congress – Since U.S. politicians give Israel $10 million per day, it is their responsibility to speak out when Israel does wrong (Congressional switchboard: 202-224-3121 Find the name of your rep at callmycongress.com/)

by Harriet Sherwood, The Guardian

Christians in Jerusalem’s Old City say their presence at the geographical heart of their faith is under threat from intimidation and aggressive property acquisition by hardline Jewish settlers.

According to church leaders, priests are being verbally abused and spat at, and property vandalised.

Tensions have risen this year in the Christian and Armenian quarters of the 1 sq km ancient walled city, which includes the Church of the Holy Sepulchre, the holiest place in Christianity where Jesus was believed to be crucified and resurrected. The Old City is also home to places of critical religious importance to Jews and Muslims.

The churches say they are facing onslaught on three fronts: a war of attrition waged by hardline settlers; unprecedented tax demands by Jerusalem city council; and a proposal to allow the expropriation of church land sold to private developers. 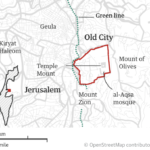 Theophilos III, the Greek Orthodox patriarch of Jerusalem and the most senior Christian leader in the Holy Land, told the Guardian: “Today the church faces a most severe threat at the hands of certain settler groups. The settlers are persistent in their attempts to erode the presence of the Christian community in Jerusalem.

“These radical settler groups are highly organised. Over the last years we have witnessed the desecration and vandalism of an unprecedented number of churches and holy sites and receive growing numbers of reports from priests and local worshippers who have been assaulted and attacked.

“Where the authorities are concerned, this behaviour goes largely unchecked and unpunished.”

At Mount Zion, just outside the Old City walls, undeveloped land owned by the church and often referred to as the “Greek garden” is regularly vandalised, according to Moni Shama, a church caretaker.

Trees have been uprooted, garbage left, graffiti scrawled on stones and paint thrown inside the ancient Chapel of Pentecost, he said. Three years ago, a Greek Orthodox seminary at the site was set alight.

The Greek Orthodox church, the oldest Christian presence in the Old City, is also deeply concerned about attempts to gain control of properties it owns close to Jaffa Gate, the main entrance to the Christian and Armenian quarters.

A court ruling is expected later this year on a disputed sale of the historic Imperial and Petra hotels. The church has challenged a deal made by an official under the previous patriarch, which it claims involved bribery and conspiracy and was therefore invalid. The church has already lost one case on the sale, but it is appealing.

It says the settler organisation Ateret Cohanim is behind the purchase of the strategically significant properties as part of its drive to increase the Jewish presence in the Old City. The organisation, dedicated to the “physical and spiritual redemption” of the Old City, has been frequently accused of using third parties to buy properties.

Abu Walid Dajani, whose family has managed the 45-room Imperial Hotel for almost 70 years, said the prospect of ownership changing hands from the Greek Orthodox church to Ateret Cohanim was a “nightmare”.

“If I used to wake up twice a night, now I wake up four times, thinking what if the decision goes in favour of Ateret Cohanim,” said Dajani, 74. “I will try my best to keep this hotel, but I know they want us out.”

Gabi Hani, whose restaurant Versavee is next to the hotel, said: “They [Ateret Cohanim] want to drive Christians out, for sure.

“If you have a hostile organisation sitting in your home, it is no longer your home.”

Daniel Luria of Ateret Cohanim said: “Claims or accusations by the Greek Patriarchate regarding ‘radical settlers’ targeting their priests with verbal abuse etc are absurd, unacceptable and disgraceful.”

He denied that the organisation wanted Christians to leave the Old City, and declined to comment on the issue of the Jaffa Gate sales. “Ateret Cohanim believes in coexistence with Christians and Muslims alike, living side by side without fences or borders, living in any neighbourhood of Jerusalem,” he said.

In a separate development – but one that church leaders say is part of a pattern of targeting Christians – Jerusalem city council issued churches with a demand in February for nearly $200m (£143m) in back taxes. In protest, the church denominations closed the Church of the Holy Sepulchre for an unprecedented three days, during which thousands of pilgrims were locked out.

The tax bill followed a decision that a tax exemption for places of worship had been wrongly applied to church-owned commercial properties. The churches say they pay taxes on purely commercial properties, such as restaurants and hotels, but many of those that the council says are liable provide educational, medical and welfare facilities for Christians and others.

The closure was lifted only after the intervention of Benjamin Netanyahu, the Israeli prime minister, who set up a committee to look at the issue of church taxes. He also temporarily halted the progress of a proposed law to expropriate church lands sold to private developers.

The bill has the support of 40 members of the Knesset, the Israeli parliament, who say the Greek Orthodox church is selling off land at discount prices to private developers, which puts leaseholders at risk. The Greek Orthodox church owns about a third of land in the Old City and key sites around Jerusalem, including the land on which the Knesset, government offices and the Israel Museum are built.

Theophilos has in the past few months travelled to the UK, the Vatican, the US and elsewhere to seek support for Christian institutions in the heart of the Holy Land. In the UK, he met Prince Charles, government ministers and Christian leaders, including the archbishops of Canterbury and Westminster and the Coptic archbishop of London.

The patriarch wants a commitment to the continuation of the status quo, an agreement which provides protection of, and access to, holy sites in Jerusalem and elsewhere, allowing Christians to live and worship in peace despite the conflicts and divisions in the area.

Pope Francis and other Christian leaders have called for the status quo to be respected.

This article was amended on 1 May 2018 to clarify that the proposed law would permit expropriation of church land after its sale to private developers.

Israel isn’t as Christian-friendly as you think