You Are Here: Home → Iran’s Zarif drives Trump to insanity 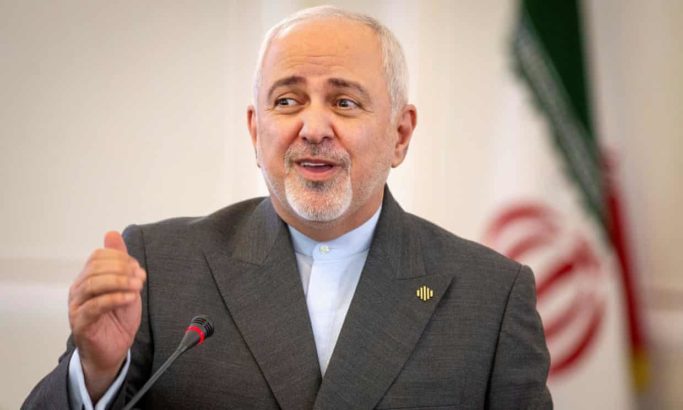 Iran’s smart and articulate Foreign Minister, Mohammad Javad Zarif, has been sanctioned by President Trump to silence the Iranian narrative in the US before the 2020 election. Iran is winning the information war, and Trump is running scared.

At a time when the Trump administration has no problem negotiating with the secretary of the Russian national security council Nikolai Patrushev, who is technically under US sanctions since April 2018, the cut and thrust of Washington’s move to sanction Iran’s Foreign Minister Mohammad Javad Zarif needs to be understood properly.

How did US Secretary of State Mike Pompeo try to explain the dispatch of Zarif to perdition? Pompeo’s statement on Wednesday attributed to Zarif a singular sin: a) Zarif “acted on behalf of the Supreme Leader”; b) Zarif took “direction from the Supreme Leader and his office”; c) Zarif was “a key enabler of Ayatollah Khamenei’s policies throughout the region and around the world”; d) and, Zarif has been “a senior regime official and apologist” of Iranian government and has “for years now been complicit in these (Iran’s) malign activities”.

Basically, Pompeo’s grouse narrows down to this: Zarif is a disciplined, dutiful, loyal Iranian public servant who abided by the Iranian system of government founded in the concept of velāyat-e faqīh (‘guardianship of the Islamic jurist’).

Does that become a sin? Any foreign minister has his job cut out for him — even Pompeo himself. Pompeo has no pretensions that he is holding the job entirely at the pleasure and discretion of his supreme leader President Trump. Trump, in fact, is an unforgiving stickler for loyalty. Ask James Mattis or Rex Tillerson.

The US establishment knows very well how the concept velāyat-e faqīh operates, how the alchemy of political power is formed in Iran, and how the decision-making process is reached. Even Trump would know it. Which is why he even tried to get through to Supreme Leader Ayatollah Ali Khamenei (and was duly snubbed). So, where is the beef?

Simply put, Zarif per se is the problem. The Trump administration is desperately keen to put an end to Zarif’s contacts with the American elite. Zarif lived and worked for several years in America from the age of 17 — as a high school student, university student, and career diplomat, ending up as Iran’s representative at the UN from 2002 to 2007. He also kept closely in touch with the US academia and intellectual circles in his capacity as a professor and editor of scholarly journals in Tehran who has written copiously on disarmament, human rights, international law, and regional conflicts.

Zarif took his job seriously and being a fluent English speaker, he could tweet and debate and spar with any American with delectable ease. Zarif outclassed the mediocre American foreign and security policy team.

Zarif’s periodical visits to New York (ostensibly to attend the UN events) increasingly became a nightmare for the Trump administration as he cast his net wide and ably put across Iran’s narrative. Trump singled out more than once that Zarif had meetings with Kerry, former secretary of state who negotiated the 2015 Iran deal.

This is the crux of the matter. By imposing sanctions on Zarif, US can deny visa to him and render unlawful (and liable to prosecution under law) any contact between him and any American national. Effectively, Trump instructed Pompeo to make sure that Zarif doesn’t come to New York between now and the 2020 November election so that his detractors and critics cannot hear from the horse’s mouth the Iranian narrative.

Trump feels exasperated that Iran is winning the information war. And he is worried that between now and November 2020, his re-election campaign may get booby-trapped. For any longtime observer of the US-Iran standoff, it is obvious that a sea change has appeared in the American discourses on Iran. There is an influential and ever growing body of opinion in the US today, which disagrees with Trump’s ‘maximum pressure’ strategy. This constituency rationally argues that Trump shouldn’t have dumped the 2015 deal.

Equally, there is a far better understanding today in the informed American opinion regarding Iran and its policies, and the zen of dealing with Persian nationalism beneath the veneer of Islamism. The surprising part is that such an awakening has happened despite the Herculean efforts by the Israeli Lobby to demonise Iran and to stymie all contrarian views in the media, think tanks and campuses — and the Hill.

Will Trump’s ploy work? Unlikely. The point is, Zarif is irrepressible. He will continue to tease, taunt, disparage, humiliate and expose and run down Trump’s Iran policies. Worse still, Zarif has driven a knife into the heart of the ‘B Team’ driving the US administration’s Iran policies currently.

Trump’s sanctions against Zarif will not set an example for any other country which has diplomatic relations with Iran. In the final analysis, Trump will have to deal with Zarif, whether he likes him or not.

The best way to counter Zarif would have been to handpick an intellectually resourceful, dynamic secretary of state. A mediocrity like Pompeo stands no chance with Zarif. This is a dumb thing Trump has done. He should have known better.

In 2001, Zarif was Iran’s main representative at the Bonn Conference, which brought together regional players in the aftermath of the US invasion of Afghanistan and the ousting of the Taliban. His American counterpart at the event, James Dobbins — who was later named as the Obama Administration’s special envoy to Afghanistan — wrote a memorable essay titled Negotiating with Iran: Reflections from Personal Experience in the Washington Quarterly about Zarif’s Erudition, wit and charm — and his pragmatism, which helped the two gifted diplomats to thrash out “over morning coffee and cakes” a deal that led to the replacement of the Northern Alliance government in Kabul with a US-backed interim set-up under Hamid Karzai. (Burhanuddin Rabbani remarked bitterly at that time he hoped that would be the last time a foreign power ever dictated to Afghans.)

Washington has now sanctioned the man who played a pivotal role in that fateful transition in Kabul leading to the installation of the US’ client regime in the Hindu Kush. Some gratitude!