You Are Here: Home → For Justice, Not Apartheid, in Palestine 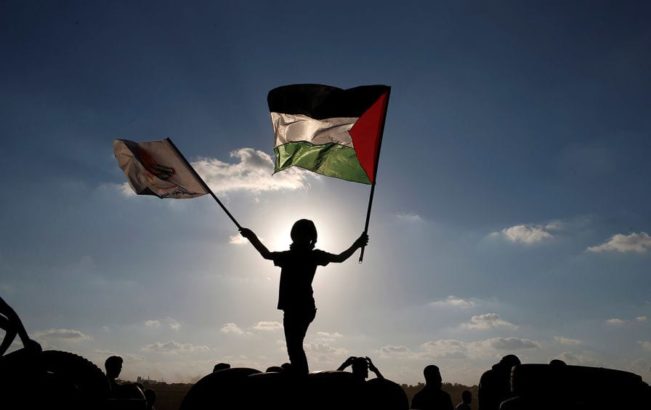 A boy waves a Palestinian flag, at the Israel-Gaza border, during clashes with Israeli troops, at a protest where Palestinians demand the right to return to their homeland, east of Gaza City, April 1, 2018. (Reuters /Mohammed Salem)

In this well-articulated piece from the editors of The Nation, we are reminded of how, a quarter-century after Oslo, Israel is consolidating its domination by cruel and illegal means—but the global resistance movement is growing.

by the Editors, The Nation

This September marks the 25th anniversary of the Oslo Accords, which were heralded by many at the time of their signing as the dawn of a new era in the Middle East, one in which Israel and the Palestine Liberation Organization would replace conflict with negotiations that would lead to peace and a Palestinian state.

Some observers at the time—including Edward Said, in this magazine—pointed out the flaws in that 1993 declaration, among them that while the PLO recognized the state of Israel and renounced violence, the accords never mentioned Israel’s occupation, never noted the illegality of Israeli settlements, and contained no promise—or, indeed, even any mention—of a Palestinian state as the end result of talks.

Whatever its virtues or flaws, the Oslo “peace process,” which has been on life support for years, is now dead. There have been no negotiations since the collapse in 2014 of the last set of talks, shepherded by Barack Obama’s secretary of state, John Kerry, and there is no sign of serious talks in the foreseeable future. What we have seen, instead, is a shocking deterioration of Palestinian life under the most right-wing government in Israel’s history.

Benjamin Netanyahu, now Israel’s longest-serving prime minister, is on the verge of achieving a long-cherished goal: not only the destruction of the Oslo process but the snuffing out of the last chance for a two-state solution to the conflict. His government’s settlement expansion, which both Kerry and US negotiator Martin Indyk have said was a key reason for the breakdown of talks, has killed hopes for that solution by carving the West Bank into noncontiguous bantustans. At the same time, Israel’s repeated military attacks on the imprisoned people of Gaza have severely damaged the strip’s infrastructure; the UN says it will be unlivable by 2020.

Intensified Israeli repression has also been directed at the Palestinian citizens of Israel, roughly 20 percent of the population. The government has repeatedly demolished Bedouin communities in the southern Negev region in an attempt to force their inhabitants into a few designated towns, thus allowing expansion of Jewish housing into formerly Bedouin areas. And in July, the Knesset passed the so-called nation-state bill, which proclaims that “Jerusalem, complete and united,” is the capital of Israel; that “the right to national self-determination in the State of Israel is unique to the Jewish people”; and that “the State views the development of Jewish settlement as a national value.” The law also declares that “Eretz Yisrael” (which encompasses all of historic Palestine) is the historic homeland of the Jewish people. As Rashid Khalidi points out at TheNation .com, “The result is a law that negates the very existence of the Palestinians and their national rights anywhere in Palestine, and not just within the infinitely elastic frontiers of the state of Israel.” As Khalidi also notes, apartheid may be an apt description of the current order, but in Gaza the plan looks more like annihilation.

The United States has never been an honest broker in the Middle East. But since Donald Trump’s inauguration, Washington has thrown out even the pretense of balance. Trump has dropped the long-standing US commitment to a two-state solution, and he has tapped as his Middle East envoy and ambassador to Israel two men, Jason Greenblatt and David Friedman, who have personally supported Israeli settlements. Trump has recognized Israeli sovereignty over Jerusalem, illegally annexed in 1967, and moved the US embassy there—at a time when Israeli soldiers were shooting hundreds of Gaza Palestinians peacefully demanding their right of return. In an act of exceptional cruelty and malice, the Trump administration has also cut off all funding to the United Nations Relief and Works Agency, which provides desperately needed aid to millions of Palestinian refugees, as well as $200 million in economic aid to Palestinians and to hospitals in East Jerusalem. And the administration has shut down the PLO mission in Washington. Given this all-out assault, it’s hard to take seriously the administration’s promise of an impending new peace plan.

In the face of Israel’s relentless settlement expansion and the inability of the international community to bring about a peaceful solution to the conflict, Palestinian civil-society groups have been calling for a campaign of boycott, divestment, and sanctions against Israel, which has inspired a growing grassroots solidarity movement. Recognizing its potential power, several years ago the Netanyahu government declared BDS a “strategic threat” and devoted a government ministry to the fight against it.

Israel’s surrogate US lobby groups have joined that fight, and a key aspect of their strategy is to brand BDS and similar campaigns as anti-Semitic (ironic, given Netanyahu’s recent cozying up to the anti-Semitic Hungarian prime minister, Viktor Orbán). The Trump administration, which has flirted with anti-Semites itself, is fully on board: The Education Department’s Office for Civil Rights recently announced that it is reopening an investigation of alleged anti-Semitism at Rutgers University—charges that the Obama administration had determined lacked merit—based on a highly contested definition of anti-Semitism that could be used to censure any criticism of Israel.

These days may seem bleak for the Palestinian cause, but the solidarity movement is growing, as more and more people recoil from an Israeli government that is steadily shedding its democratic and liberal elements. With the two-state solution fading away, a de facto one-state apartheid regime, in which half the population has little or no rights, is being born. In the long run, such a system cannot survive. Those who care about justice and believe, as we do, that Jews and Palestinians in Israel-Palestine can and must find a way to share the land in harmony, with equal rights for all, will have to redouble our efforts to end Israel’s oppression and find a just resolution of the conflict.

My grandfather Nelson Mandela fought apartheid. I see the parallels with Israel