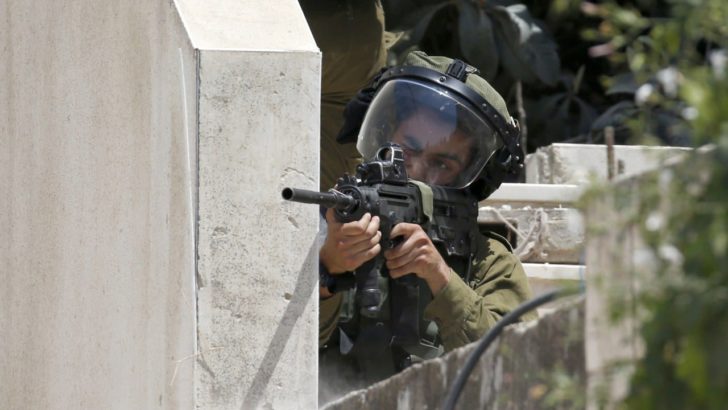 An Israeli soldier aims his gun during clashes following a weekly demonstration against the expropriation of Palestinian land by Israel in the village of Kfar Qaddum, near Nablus in the occupied West Bank, on June 22 2018. (Photo by JAAFAR ASHTIYEH/AFP/Getty Images)

Israeli human rights organization B’tselem discusses Israel’s “investigations” into killings of Palestinians, which have served no authentic purpose, but only created an illusion of inquiry. B’tselem calls on the international community to demand real accountability.

Ahead of the UN Human Rights Council meeting Monday, 18 March 2019 on the findings of the UN commission of inquiry into the 2018 Gaza protests, B’Tselem issued a position paper explaining that Israel’s promise to “investigate” 11 incidents in which protesters were killed is mere propaganda. In a letter, B’Tselem’s director, Hagai El-Ad called upon the head of the commission, Santiago Canton, to reject the tapestry of lies Israel has woven while killing more unarmed protesters: “A real change in Israeli policy will only take place if the international community demands it clearly and unequivocally, and if it stops allowing Israel to do no more than offer hollow promises of ‘investigation’.”

In the position paper, B’Tselem explains why announcing investigations is a standard ploy that Israel employs to ease international pressure whenever its unlawful policy elicits criticism.

For the past year, Israel has implemented an unlawful open-fire policy towards Palestinians protesting near the Gaza perimeter fence, which permits live fire at unarmed protesters who pose no danger to anyone. Mere days after the protests began, in response to an international outcry over the dozens of fatalities, Israel employed its tried-and-true tactic in such situations and swiftly announced it would “investigate exceptional incidents”.

Recently, leading up to the scheduled publication of the conclusions by the UN Human Rights Council international commission of inquiry on the matter, the IDF Spokesperson has again begun to flaunt this fig leaf: eleven Military Police investigations regarding “specific incidents,” all still pending. Meanwhile, the regulations remain unchanged and are still being implemented in the field. People are still being killed or wounded, and no one is questioning the policy or being held to account for it.

Israel’s announcement has, at least so far, achieved its goal: welcomed by the international community, it has eased pressure on Israel, enabling the policy that has led thus far to 200 persons killed and more than 6,300 injured to continue unchanged.

Earlier this year, Israel’s High Court of Justice found this hollow promise satisfactory in ruling on a petition against the open-fire policy, and refused to order that it be changed. In their ruling the justices relied, among other things, on the assurance that the military would investigate “exceptional incidents”, while Israel continues to implement its lethal policy.

The “investigations” carried out by the military whitewashing mechanism, under the leadership of the Military Advocate General (MAG), are meaningless other than their role in aiding Israel’s effort to silence international criticism. They do not lead to adopting any measures against any of the people responsible for harm to Palestinians, as from the very outset the investigations do not probe the responsibility at the level of officials who set out and approved the policy or the unlawful orders.

The investigations do not deter the troops serving on the ground, as they are so few and far between, and even in cases in which an investigation was actually launched, it was then almost invariably closed without any further measures. Nor do the investigations achieve justice for the victims or their families.

This is standard procedure for Israel:

None of this is a random fluke: Israel does not wish to truly investigate, and therefore has created mechanisms that are incapable of carrying out full investigations. Israel’s sole purpose is to create a façade of an intention to investigate in order to silence criticism.

However, investigations and accountability are no merely theoretical issue or one of image. They are a matter of life and death. Investigations are necessary so that senior officials realize that they cannot give unlawful orders, and to demonstrate to the troops in the field the parameters of the use of force. When propaganda diversion tactics succeed in preventing accountability, there is a price to pay, and it is measured in human lives.

The international community must stop buying into Israel’s propaganda ploys concerning so-called “investigations”. There is no rational basis to expect Israel to carry out a real investigation. It does not have the slightest interest in investigating the policy itself, condemning it or demanding accountability from those responsible. Therefore, the international community must make the most of its power and influence to compel Israel to change its policy and immediately cease the gunfire at protesters who pose no danger.

Amira Hass: As if Israel Did Nothing Shameful Before the Advent of Smartphones