You Are Here: Home → FLORIDIANS: your freedom of speech is at risk – take action!

FLORIDIANS: your freedom of speech is at risk – take action! 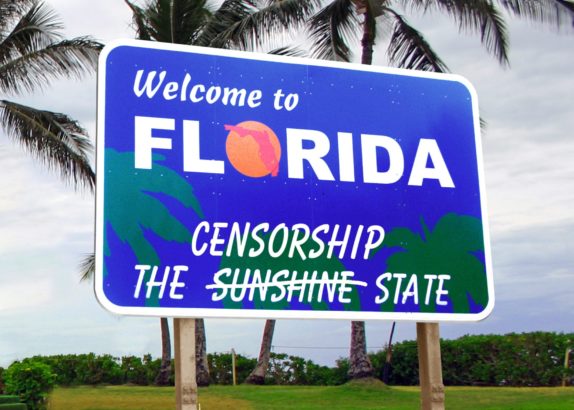 A new bill would strip Floridians of their freedom to speak their minds regarding Israel.

The Bill of Rights gives Americans the right to free speech, including the right to criticize any country on earth, including our own. But a Florida ‘hate crime’ bill working its way through House committees would interfere with Floridians’ constitutional right to make statements critical of one foreign country: Israel.

Contact Florida lawmakers (info below) and ask them to oppose this bill, which violates some of our fundamental rights.

The United States is in the throes of a free speech crisis.

We have the constitutional right to criticize our own country; we can criticize any country on any continent in the world, but in some states we cannot criticize Israel.

In spite of grave criticism from the American Civil Liberties Union (ACLU), many states have passed, or are passing, bills that suppress our speech when it comes to Israel.

They are doing this through changing the definition of anti-Semitism, and then codifying this new, Israel-centric definition into law.

Israel, in its 70th year of dispossessing indigenous Palestinians, its 51st year of military occupation–using $10.5 million a day of American taxpayer money–ought not to be above criticism. But Florida may soon criminalize criticism of Israel.

This legislation redefines anti-Semitism and then uses this to prohibit certain statements about Israel. Believe it or not, in Florida, it may soon be considered anti-Semitic to

“[focus] peace or human rights investigations only on Israel”

even though a multitude of international human rights organizations have documented severe abuses by the Israeli military.

If for example you want to criticize Israel’s nightly practice of kidnapping children from their beds, torturing them, and interrogating them in a language they don’t understand–then you’d better find out which other countries are doing that, and criticize them too. If you don’t, you may be a criminal.

Or if you call for a full investigation of Israel’s attack on a U.S. Navy ship that killed 34 American servicemen and wounded over 170, and do not at the same time call for an investigation of Japan for Pearl Harbor, you might also be breaking the proposed Israel-shielding law.

Florida is just the latest of many states and countries under pressure to adopt an Israel-centric definition of anti-Semitism, and then use it to prevent criticism of Israel–even when it is factual.

The South Carolina Senate passed almost identical legislation in 2018; the Israel-centric definition of anti-Semitism, according to experts, will impede free academic inquiry when applied on college campuses. For example, teachers and students may not discuss Israeli human-rights violations.

While the ACLU stays out of the Israeli-Palestinian issue, the organization has taken a strong stand on the Israel-centric definition of anti-Semitism found in this type of legislation:

The bill is part of a disturbing surge of government-led attempts to suppress the speech of people on only one side of the Israel-Palestine debate…Those who seek to protest, boycott, or otherwise criticize the Israeli government are being silenced…campaigns aimed at excluding critics of Israel from participating in public events are mounting.

This is not the first time that Randy Fine has tried to protect Israel by suppressing free speech. In February 2018 he tried to pressure venues to cancel concerts starring Lorde because she had taken a stand against Israel’s treatment of Palestinians. Rep. Fine’s reasoning was based on pro-Israel legislation already in place outlawing boycotts of Israel (this legislation also appears to violate the U.S. Constitution).

The new bill is even broader in scope.

You can contact your legislators early in the game, especially if they are on committees (below) that will study the bills. (All of the names below are clickable–follow them to find phone numbers or send emails.)

The Senate bill, SB 1272, will go through the Senate Criminal Justice, Education, and Rules committees (see committee member lists below the House lists), then on to the full Senate.

The House bill, HB 741, will make its way through the House Education and Judiciary committees (members below), then on to the full House.

Please take a few minutes to contact your legislators–let them know that silencing speech about Israel not only suppresses free speech, but also enables Israel to take innocent Palestinian lives.

If Americans Knew will continue to monitor the progress of these bills.