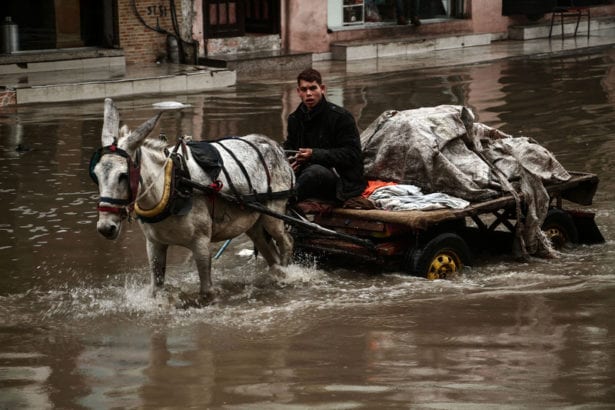 This winter is expected to be even tougher, because of pandemic lockdown restrictions that have forced the closure of many businesses, pushing yet more people into poverty.

By Ola Mousa, reposted from The Electronic Intifada

Winter is falling hard in Gaza.

Heavy rains for the past months since November have led to the flooding of houses and roads, especially in Gaza’s many refugee camps.

“I don’t have money to build the kind of walls that will prevent water from leaking inside,” he told The Electronic Intifada.

Hamad’s home also houses his wife and five children, and their predicament is not unique. Many houses in the camp need to be rain-proofed, especially in the areas that overlook the Mediterranean Sea where dwellings are directly exposed to lashing winds and strong rains.

The narrow alleys and roads of the camp also flood easily.

Some of this could have been avoided with better drainage. But that is the kind of infrastructure project Palestinians in Gaza cannot undertake because of the 14-year-old Israeli-Egyptian blockade.

Like everywhere else, 2020 was tough in Gaza. But in this overcrowded, besieged, and impoverished coastal strip of land, lockdowns and the economic and humanitarian pain resulting from the global COVID-19 pandemic have only exacerbated an already desperate situation.

More than half the population already lived under the poverty line. And the economy has suffered dramatically as a result of the Israeli-Egyptian blockade on Gaza and repeated Israeli military operations that, according to the UN, have cost the territory nearly $17 billion dollars in the decade from 2007-2017.

The UN argues that without the blockade and Israel’s military operations, poverty in Gaza could have fallen as low as 15 percent by 2017.