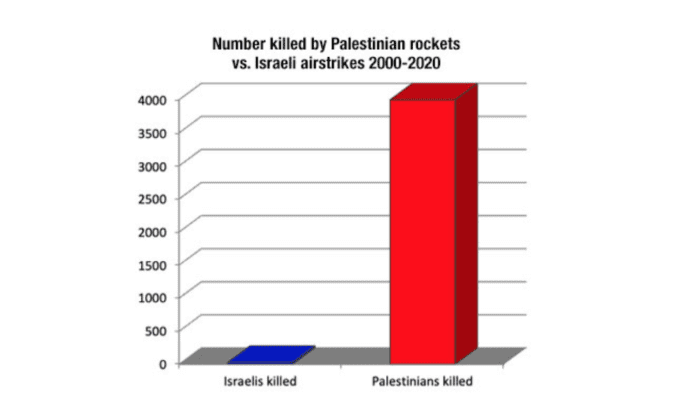 Chart of Israelis killed by rockets from Gaza and Palestinians in Gaza killed by Israeli airstrike. (If Americans Knew)

US news reports on Israel-Palestine virtually always mention ‘thousands of rockets have been fired from Gaza.’ This suggests that Israelis are being victimized by Palestinian aggressors. However, the facts show the opposite. Israel initiated the violence and has killed vastly more people.

Gazan rockets are the response of a desperate population that is literally being starved and oppressed. (Gazans have also tried massive nonviolent demonstrations, but these get far less media attention. Israeli snipers have killed and maimed numerous participants.)

According to the Israeli military, the first rocket launched by a Gazan resistance group was fired on April 16, 2001. This came AFTER Israeli forces had shelled and invaded Gaza in the previous months (photos here), killing 570+ Palestinians.

The production of rockets began in September 2001. In 2001 Palestinian groups fired a total of 4 rockets. (According to the Jewish Policy Center and Jewish Virtual Library. The first Gazan rocket to land in Israel was in 2002. (Jewish Policy Center)

Click here for full information on Palestinian rockets and air attacks by both sides:

[For all deaths among both populations from all types of attacks, go here. For additional statistics, go here.]

Understanding the Crisis in Gaza: Important Facts and Context about the Recent Violence

Against Our Better Judgment: The Hidden History of How the U.S. Was Used to Create Israel