You Are Here: Home → Israel’s obscene mismanagement of the Covid-19 vaccine 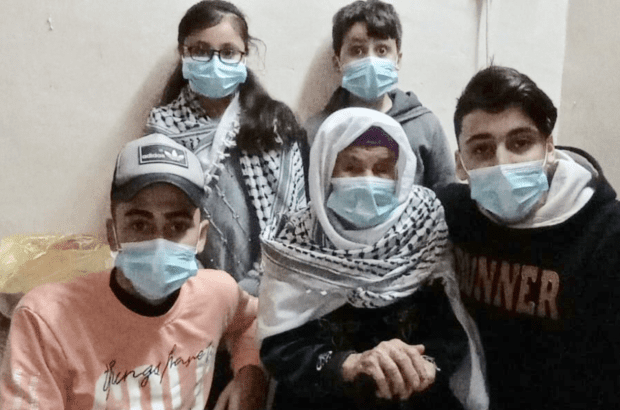 Israel and Covid: Palestinians aren’t at the bottom of the list – they’re not on the list at all. (Pictured: a Palestinian family in Nuseirat refugee camp, Gaza. The family had originally been from Ibdis, before Zionist forces forced them off their ancestral land in 1948 to establish the self-identified ‘Jewish state.’)

“No country has done what we are able to do,” said Israel PM Benjamin Netanyahu. He is so right – but not in the way he thinks he is.

Today, February 16, multiple sources report that Israel is blocking the delivery of 2,000 doses of the vaccine to Gaza for use by ICU workers.

(One anonymous Israeli source claims, “It wasn’t blocked. They are still contemplating it.” The Israeli parliament, in no apparent rush, is debating the issue.)

Israel has already administered 5.5 million doses of the Covid vaccine to its citizens. In fact, the vaccine is available to every Israeli over 16 years of age, and the rollout program is running out of willing participants. The Health Ministry and some private companies are considering offering incentives to get more Israelis vaccinated.

The Palestinian Authority (PA) has ordered vaccines – including from charitable sources – but they will be arriving slowly. The first 280,000 doses are expected by the end of February, roughly 11 weeks after Israel received its first delivery. Even when the full amount arrives, it will not be enough for the Palestinian population.

Israel has been under pressure since early January to provide vaccines for Palestinians (details below). On January 31, Israel agreed to give the Palestinian Authority 5,000 doses (as of February 9, only 2,000 have been delivered) – this in spite of the fact that Israel has plenty, and will soon have a surplus.

Israeli PM Benjamin Netanyahu (who is up for re-election this spring) boasts, “We are vaccinating at 10 times the pace of the United States. No country has done what we are able to do.” He’s right.

Israel is so far ahead in the Covid vaccine game that the Israeli Health Ministry is making it available to all Israelis over 35 years of age – not just essential workers, healthcare providers, and high-risk individuals.

But most Palestinians under Israeli rule, regardless of age or risk, don’t qualify.

Compared to the US vaccination rate of about 6.2%, Israel has distributed initial doses of the vaccine to roughly 29% of its population, and second doses to nearly half (Israeli Palestinians – Muslim and Christian – appear to be receiving proportionately fewer vaccines than Israeli Jews). For a short time, Israel enjoyed celebrity status for having the “fastest rollout in the world.”

It wasn’t long before word got out that for the occupied Palestinian territories under Israeli control, the celebrated vaccine response was just another example of Israeli apartheid. Journalists and politicians chided Israel for its discriminatory policies – which in turn led to a wave of rebuttals against those who would dare to tarnish the good name of Israel.

The facts speak for themselves.

As the Financial Times reports, Israel has already received “planeloads” of vaccines, and more are due soon. By March, the state will have a surplus.

Next door, the Palestinian Authority (PA) has arranged with Russian suppliers and the World Health Organization (WHO) to get vaccines, but they are not expected to arrive anytime soon.

With a shortage of PPE, nearly 8,000 Palestinian medics have already been infected with Covid, hampering efforts to respond aggressively to the pandemic.

The PA requested from Israel just 10,000 doses to protect Palestinian frontline workers for now. Israel has refused, although the Fourth Geneva Convention requires the occupier to provide medical services to the occupied population, including “measures necessary to combat the spread of contagious diseases and epidemics.”

Israel has tried to hide behind a technicality, claiming that Palestine is not “occupied” territory, but “disputed,” and Geneva does not apply. (The International Committee of the Red Cross – ICRC – explains that occupation requires “some degree of control by hostile troops over a foreign territory.” This describes Israel’s position vis-a-vis the Palestinian territories. Read more on the definition of occupation and how it applies to the Palestinian territories here.)

Those Palestinians living in Israel and East Jerusalem have access to vaccines; those living in Gaza do not. In the West Bank – Palestinian territory – only the Jewish settlers living on land stolen from Palestinians are receiving vaccinations from Israel.

As far as the vaccination is concerned, I think that it’s an Israeli obligation first and foremost to its citizens. They pay taxes for that, don’t they?

But as one resident of Gaza pointed out,

We are always obliged to get Israel’s permission to travel for medical treatment or to get medical supplies into the Strip. Why is it only now that we have to be responsible for our own health?

[Read more about Israel’s absolute control over medical travel here and here, and about the medical supply blockade here and here.]

Israel has certainly not made it easy for Palestinians to take care of their own pandemic-related needs.

Israel controls imports and exports, and has allowed insufficient numbers of WHO-donated Covid testing kits, masks, and other necessities into the occupied Territories.

Israel has also demolished or dismantled a string of clinics and makeshift Covid testing facilities since the beginning of the pandemic, arrested volunteers as they worked to disinfect schools, and even stolen food meant for needy Palestinians.

(Demolition of residential and non-residential structures – and even entire villages – has been a regular occurrence since 2006.)

At the beginning of the pandemic, Israel vowed to stop home demolitions for the duration; however no such thing happened. 2020 saw, in fact, one of the highest demolition rates in recent years. According to OCHA, at least 847 housing units and non-residential structures were demolished, leaving over 1,000 people homeless – half of them children.

As for Gaza, where the 14-year, ongoing blockade has tapped out the medical sector, some Israelis have suggested using vaccines as a bargaining chip.

Gaza’s ruling party, Hamas, holds two Israeli civilians as prisoners (as well as remains of two soldiers) since 2014. Alan Baker, a former Israeli ambassador, suggests a swap – essentially the lives of 2 million Gazans for the return of 4 Israelis.

Beyond its implicit cheapening of Palestinian life, Baker’s suggestion ignores the fact that Israel holds over 5,000 Palestinian prisoners and the remains of hundreds more.

In recent weeks, as Israel’s discriminative Covid policies have become more widely known, human rights organizations around the world have been calling for equality, starting with the most vulnerable Palestinian population of all: prisoners in Israel’s infamously overcrowded, dilapidated jails (where only Israeli guards have been vaccinated).

Israel holds roughly 4,400 Palestinians as political prisoners, 440 administrative detainees, and 160 children in facilities where torture is routine, medical neglect is prevalent, and Covid rates have been spiking.

Israeli Prison Services (IPS) has removed many hygiene and cleaning supplies from the commissaries; has limited access to blankets and winter clothing for detainees; and per an Israeli High Court ruling last summer, the facilities are under no obligation to provide means for inmates to practice social distancing.

The president of Israel (a largely symbolic office) reminded the Health Ministry that withholding Covid vaccines from prisoners is “inconsistent with our values, the values ​​of the state, Judaism, and democracy.”

Either the president’s comments were compelling, or the global pressure from human rights organizations worked: the Health Ministry announced a start date of January 18 or 19.

We subsidize this abomination

American taxpayers keep Israel in business to the tune of $10 million a day in military aid alone, plus additional funding in many shapes and forms.

(Israel receives more of the US foreign aid budget than any other country – in fact, the US has given more money to Israel with its population of 9 million than to the billion plus people in all of sub-Saharan Africa, Latin America, and the Caribbean combined.)

As American money flows, human rights organizations regularly report on Israel’s violations of international law (for a few examples, read this, this, and this), the International Criminal Court is investigating possible war crimes by Israel, and the word “apartheid” is being used commonly to describe the situation.

“[P]eople on one side of the street are receiving vaccines, while those on the other do not, based on whether they’re Jewish or Palestinian.

As much coverage as Israel’s deplorable pandemic policies have received worldwide, US politicians and mainstream media have paid little attention. President Biden has rarely criticized Israel; Senate Majority Leader Chuck Schumer likewise has been silent (not surprising, since Schumer calls himself a “guardian of Israel” – see video).

But even as human rights organizations and the odd politician rail against Israel’s inhuman practices toward Palestinians and call on the Jewish State to exercise benevolence during a pandemic, the fact is, Israel will not comply.

International law requires Israel to provide healthcare to its occupied population – but for decades nothing has happened. Why would it start now?

International law demands that Israel allow the return of the indigenous Palestinians that fled wars in 1948 and 1967 – but Israel has prevented them, leaving a population that now numbers in the millions to suffer in refugee camps, brooding on the injustice.

The global community needs to insist on justice now, before Israel’s ethnic cleansing of Palestine is complete.

US media often carry inaccurate Israeli claims about the situation. For example, Israel and Israel apologists in the US allege that the Palestinian territories are supposedly governed by the Oslo Accords. However, that claim rests on an incomplete rendering of the facts; read about it here.

Similarly, Israel and its advocates often point to Israel’s 2005 “disengagement” from Gaza and claim that the enclave is no longer occupied, and thus not Israel’s responsibility. That also is incorrect, as the UN, international human rights groups like the Red Cross and Amnesty International, and numerous legal experts (eg this and this) have stated that Israel exercises near total control of Gaza, therefore keeping Gaza under “de facto occupation” and therefore responsible for its inhabitants.