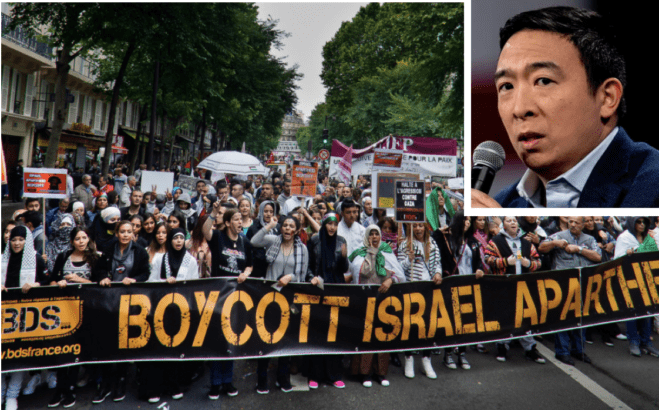 New York City mayoral candidate Andrew Yang is letting Israel partisans control his campaign narrative on the issue of BDS. He’s opting for apartheid instead of justice and peace.

We’re sorry to hear that Yang has just posted positive for covid and is experiencing a few symptoms. We’re going to postpone this action until he is fully recovered and wish him well.

[You can also email the Yang campaign at Julian@yangforny.com]

Andrew Yang, former presidential candidate, is running for mayor of New York City, and he has a heavy hitter running his campaign – one with strong ties to Israel.

Bradley Tusk, aka “the Fixer,” has a background in politics (working for Mike Bloomberg, Chuck Schumer, and others), and finance. He founded the consulting firm Tusk Strategies (slogan: “We solve really hard political problems”).

He is also well-connected in Israel, and perhaps most of all, he works closely with Ron Lauder, head of the World Jewish Congress (WJC). One of the WJC’s main issues is support for Israel, despite its long record of human rights abuses and its discriminatory system.

Tusk Strategies – which is at the helm of Andrew Yang’s mayoral run – is also spearheading Lauder’s Anti-Semitism Accountability Project (ASAP), a $25 million multi-pronged effort whose goal is “the complete elimination of any form of anti-Semitism in mainstream American life.”

ASAP, like the WJC, employs the newly created IHRA definition of anti-Semitism, a revisionist, nontraditional definition of antisemitism which categorizes many statements about Israel as “antisemitic” – often including legitimate criticism of Israeli violence (see this) and support for Palestinian rights.

ASAP targets politicians, as well as universities and professors with what they claim are “an anti-Semitic point of view” (“either stop it, or we’ll go after your donors”). Tusk added that what sets ASAP apart from other anti-Semitism programs is that “we’re willing to be really aggressive, really vicious, and really political.”

Among the first individuals to be singled out by ASAP for alleged antisemitism were Muslim Congress women Ilhan Omar of Minnesota and Rashida Tlaib of Michigan, for their statements about Israel-Palestine.

Ron Lauder’s vision meshes well with Bradley Tusk’s assertive style – a style he described in detail in his 2018 book The Fixer: My Adventures Saving Startups from Death by Politics.

The Fixer details some of Tusk’s strategies in chapters entitled “Control the narrative, control politics” and “People want to be led.”

Candidate Yang may be a test case for the Lauder-Tusk method.

“People want to be led”

A year ago, Andrew Yang was known in the Jewish community for his stand against circumcision as an “intactivist.” He rarely discussed Middle East policy, but when asked, he echoed the usual safe views: he favored a “two-state solution,” and claimed that Israel is “an ally.”

Bradley Tusk got to know Yang during the 2020 election cycle. After Yang had dropped out of the race, Tusk was sent to woo Yang into endorsing Bloomberg. While Tusk failed to accomplish that goal, he saw in Yang someone who could be useful – an authentic guy who might make some statements that were “politically problematic,” but who would learn from his mistakes. (Translation: Yang could be led.) Tusk built a relationship with Yang.*

Israeli media reported that a year ago Yang had expressed no opinion on BDS – he was a blank slate.

Yet, suddenly this year Yang went from no views on BDS to publishing a column in the Jewish Forward stating unequivocally:  “BDS [is] rooted in antisemitic thought and history, hearkening back to fascist boycotts of Jewish businesses,” and then “the BDS movement has refused to condemn violence.”

This is not the position of a man who has done an objective study of BDS (one might even wonder whether Yang wrote the column himself, or someone from ASAP did it for him). As one writer reminded him,

By likening the non-violent Palestinian civil society call for international solidarity to hold Israel accountable for human rights violations – which is inspired by the civil rights and anti-apartheid movement – to Nazism(!), you show ignorance & smear a people asking to be free.

So @AndrewYang, how many Palestinians did you actually speak to before deciding to smear them in the course of your political campaign?

Yang’s BDS comments came out just ten days after a leading Israeli human rights group published a game-changing report that labeled Israel an “apartheid regime,” an analysis that has long been confirmed by experts. Apartheid in South Africa led to an international boycott. Yet, Yang condemns a boycott against Israeli apartheid.

Yang’s failure to connect the dots says a lot about who he listens to.

During the 2020 presidential race, the New York Times asked each of the candidates a series of questions about Israel and Palestine. Their answers were pretty consistent, except for Andrew Yang’s left-field response to the question, “Should all Palestinians and their descendants have the right to return to Israel?”

Most answered “No” or gave a non-answer. Yang said “Yes.”

He later retracted this, saying that a staffer had written the answer, and declared, “I do not believe that all [Palestinian] refugees and descendants have the right to return to Israel.”

As was the case with BDS, Yang’s 180-degree turn here indicates that the pro-Israel crowd has his ear. If he had listened to even one Palestinian, or read up on international law, his answer would at the very least have contained nuance – if not support for the Right of Return.

Andrew Yang has great potential to do something new and exciting in our country – but not if he lets the most “aggressive, vicious” voices control the narrative.

A good start would be to bring him up to speed on BDS.

[You can email the Yang campaign at Julian@yangforny.com]