You Are Here: Home → ‘Winds are shifting’: US Congress criticise Israel in two rare letters 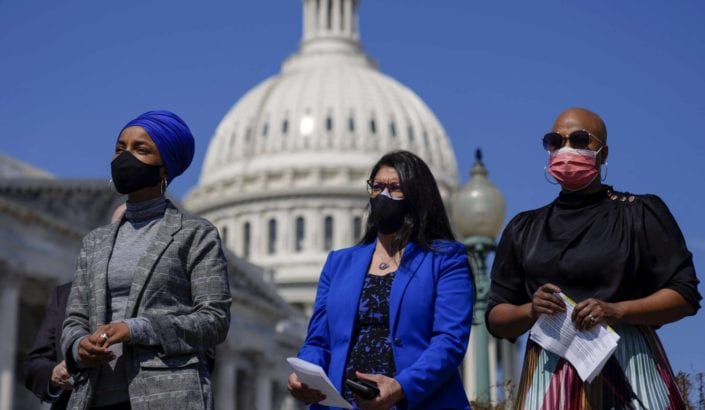 Members of both houses of Congress have signed letters to the US Secretary of State about Israel. (Pictured: three of the signatories Ilhan Omar, Rashida Tlaib and Ayanna Pressley, last week.

Support for Palestinian human rights may be on the rise in Congress at last: In 2 separate letters, House members slam range of Israeli policies, and five senators call on Israel to vaccinate Palestinians.

US lawmakers from both chambers of Congress have sent letters to the Biden administration criticising the Israeli government and urging it to vaccinate Palestinians living under its control.

In two separate letters sent to Secretary of State Antony Blinken on Friday, progressive senators and members of the House of Representatives called on the US administration to resume funding for the UN agency for Palestinian refugees (UNRWA) and push to ensure the rights of Palestinians.

The documents signal the growing willingness to criticise Israel amongst Democrats in Congress, a branch of the US government where unquestioning support for Israel is the norm.

The House letter, signed by 12 legislators and led by Rashida Tlaib and Mark Pocan, said the State Department should investigate and condemn the recent demolition of Palestinian homes in the West Bank by Israeli forces.

“We are greatly heartened that the Biden Administration is opposed to Israeli annexation; however, Israel’s ongoing colonization of the Palestinian West Bank, including East Jerusalem, alongside its demolition of Palestinian homes, is a form of ongoing, de facto annexation which needs to be unequivocally opposed by the United States,” the House members wrote.

“The message from this Administration must be clear: settler colonialism in any form – including Israel’s settlements in East Jerusalem and the West Bank – is illegal under international law and will not be tolerated.”

“As the occupying power under international law, Israel is legally obligated to provide for the health and well-being of all people under its control,” the senators said.

Israel, whose vaccination campaign for its citizens is leading the world per-capita, cites the Oslo Accords to argue that the Palestinian Authority is responsible for health care in the occupied territories.

The senators wrote that Oslo does “not supersede Israel’s responsibilities under the 4th Geneva Convention”. International law states that the occupying power is responsible for the health of the occupied population, including “the adoption and application of the prophylactic and preventive measures necessary to combat the spread of contagious diseases and epidemics”.

Moreover, legal experts say that Israel, which regularly violates the Oslo Accords, controls all the infrastructure needed to import and administer the vaccines in the West Bank and Gaza.

“We remain concerned about Israel’s policy of demolishing Palestinian homes in the occupied West Bank, including East Jerusalem,” the lawmakers said.

“We request that the State Department undertake an investigation into Israel’s possible use of US equipment in these home demolitions and determine whether these materials have been used in violation of the Arms Export Control Act or any US-Israeli end-use agreements.

“We believe the State Department should condemn Israel’s home demolitions in unequivocal terms and take effective and timely diplomatic action to end this policy.”

House members also called on President Joe Biden to officially revoke Donald Trump’s “deal of the century,” a plan to end the conflict that was overwhelmingly rejected by Palestinians for proposing that Israel keep all of its West Bank settlements and the entire city of Jerusalem.

“We believe that the Biden Administration should officially take this plan off the table and make clear to Israel and the Palestinian people that no part of it will constitute the basis for any future US-backed plan,” the letter said.

For their part, the senators called on the administration to revive hopes of peace and ensure the security and well-being of both Israelis and Palestinians.

“The occupation will continue to present problems such as those articulated above, so we urge the administration to work towards an equitable resolution to ensure the rights of all people,” it said.

“Ultimately these issues will not be fully resolved until both parties agree to a fair solution that ensures full citizenship rights for both Israelis and Palestinians.”

Beth Miller, government affairs manager at JVP Action, a political advocacy group linked to Jewish Voice for Peace, said Friday’s letters “sign that the winds are shifting” in the debate around Israel-Palestine in Washington, underscoring the significance of both documents.

“These letters show that the movement that has been pressuring Congress around Palestinian rights is finally breaking through,” she said.

Still, the Biden administration is yet to voice any criticism of Israeli government policies, including on the issues of settlements and vaccination.

Blinken has also rebuked the International Criminal Court for deciding to investigate alleged war crimes committed in Palestine, and the administration regularly condemns the Palestinian-led Boycott, Divestment and Sanctions (BDS) movement, which seeks to pressure Israel to end abuses against Palestinians.

“The Biden administration’s policy toward Palestine-Israel so far has been incredibly disappointing,” Miller told MEE.

“They have essentially come out against every possible mode of holding the Israeli government accountable for human rights violations against Palestinians, and they are sending a really clear signal that they don’t intend on making much of a shift from what Trump’s policies were.”

But she added that Friday’s letters demonstrate the difference between progressives in Congress and the administration when it comes to the approach to Palestinians’ human rights.

“And that’s really important because that’s how we build pressure over time to force the White House to take real action,” Miller told MEE.

“And so, it matters that more and more progressives in Congress are responding to the pressure of the grassroots in their districts who want to see the Israeli government held accountable for human rights violations against Palestinians.”