You Are Here: Home → Gallup: support for Israel waning – majority of Democrats want pressure on Israel 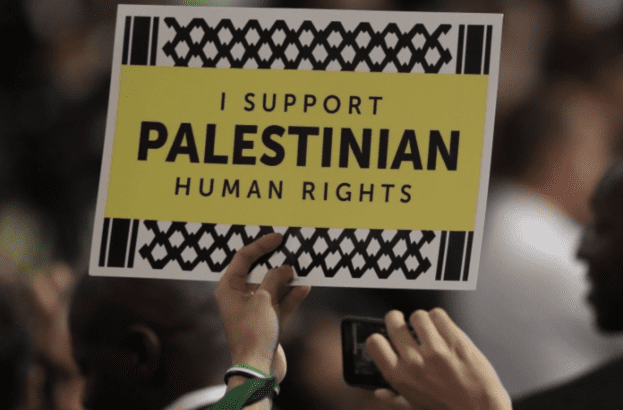 There’s been slippage in support for Israel among Democrats. (Pictured: a delegate at the 2016 Democratic convention in Philadelphia)

Support for Israel is not as bipartisan as it used to be: for the first time, the majority of Democrats surveyed by Gallup say US pressure should be focused on Israel, not the Palestinians

This year’s annual Gallup poll has revealed a shift in sentiment among Americans regarding Israel and the Palestinians, with the majority of Democrats for the first time responding that the US should be putting more pressure on the Israeli government than the Palestinian leadership.

The findings continued among the general population, with the number of all Americans wanting more US pressure on Israel increasing from 27 percent in 2018 to 34 percent in 2021.

The figures represent the highest level of demand for pressuring Israel in Gallup’s data since 2007. Over the same period, the percentage in favour of the US putting more pressure on both parties, or on neither, declined from 21 percent to 14 percent.

The findings come amid unprecedented moves in Congress, with critical demands coming from Capitol Hill, including those condemning Israel’s treatment of Palestinians during the Covid-19 pandemic, and a handful of lawmakers in support of applying conditions on US aid to Israel.

Maya Berry, executive director of the Arab American Institute, said the shift in attitudes laid out in the Gallup poll was particularly significant given the “very rigorous campaign” launched by pro-Israel groups to silence those advocating for Palestinian rights.

“I think what you’re looking at is that people understand this issue is one of justice, and no matter how much time and resources are devoted to attempting to misrepresent the issue, it’s finally reaching the general American public in a way that they can’t ignore,” Berry said.

For decades, the pro-Israel lobby has been considered one of the more powerful influence-sectors in Washington.

In recent years, efforts to pass legislation, both at the federal and state level, against the Boycott Divestment and Sanctions (BDS) movement that seeks to put economic pressure on Israel to end the occupation has increased. Nearly every state has now either passed or introduced laws that would penalise people, schools or companies for supporting the BDS movement.

Berry said the move to pass such laws, as well as the pressures put on college campuses to disallow BDS initiatives or courses critical of Israel, have come in response to a shifting of sentiments regarding the occupation among more left-leaning Americans.

“It’s a response, because BDS as a movement has been effective,” Berry said. “The suppression is reactive in nature.”

While there has been no change over the past year in Americans’ general stance on the Israeli-Palestinian conflict, with the majority of Americans still more sympathetic to the Israelis than the Palestinians, the percentage favouring the Palestinians is at a high point in the trend since 2001, according to the Gallup poll.

Imad Harb, the director of research and analysis at Arab Center Washington DC, stressed that any shift in public opinion would take time to reach policymakers, even just among Democrats, but that it would eventually begin to influence governance.

“It’s all contingent on how things will develop, but definitely long term, future administrations or new candidates for office will have to really take into account that there is a change, a demographic change and an ideological change, within the Democratic party that they have to account for,” he said.

Harb also noted that a large portion of Democrats moving to pressure Israel were among younger and more progressive camps, as opposed to those more likely to support the old guard.

“There is a demographic shift within the party itself,” Harb said. “The young people are looking more towards the party taking a very principled stance on rights, including the principle of equal rights between Israelis and Palestinians, so this was actually expected.

“Generally speaking, the party is bound to make these changes, considering the youth in the party are going to be influencing things in the future,” he continued.

Berry commended initiatives led by youth groups as well as those from liberal Jewish groups such as Jewish Voice for Peace and IfNotNow, noting the “incredible pressure” put on such groups from pro-Israel lobbies on college campuses and within the wider American political sphere.

“In addition to Americans saying, ‘this occupation doesn’t represent my values, and I want US policy to be different’, you have really important leadership in the American Jewish community saying ‘no more, not in my name anymore’.” Berry said.

Berry noted that in addition to anti-BDS laws, groups such as the Canary Mission, a website dedicated to demonising pro-Palestinian students, have been formidable obstacles threatening those who choose to speak up.

“In the face of really difficult and extreme measures taken to silence them, they have stepped up and they are continuing to lead on these issues,” she continued. “It’s just a matter of moving the rest of the policymakers to advocate for your policy interests.”

Among Republicans, support for Israel has remained consistent, with the overwhelming majority still in favour of more pressure being applied to the Palestinians, instead of Israel.

Support for the Palestinian Authority has meanwhile risen from nine percent to 19 percent among Republicans since 2001.

Harb noted that Israel had long pushed for American support to be a bipartisan issue, and said that was likely to remain the reality in Washington for some time, but with conditions requiring moves towards Palestinian rights and statehood.

“The Democrats have not abandoned Israel, and Republicans are definitely showing more and more of a slant and more loyalty to Israeli policies, but I don’t think that Israel should worry about whether its interests are protected in the United States – that bipartisanship regarding Israel will remain, although that bipartisanship can accommodate a better look at Palestinian rights,” Harb said.

“Palestinians also deserve a decent life, and they deserve a decent political expression and a state of their own. And that does not necessarily have to affect how Israel is looked at in the American society or in the political system.”