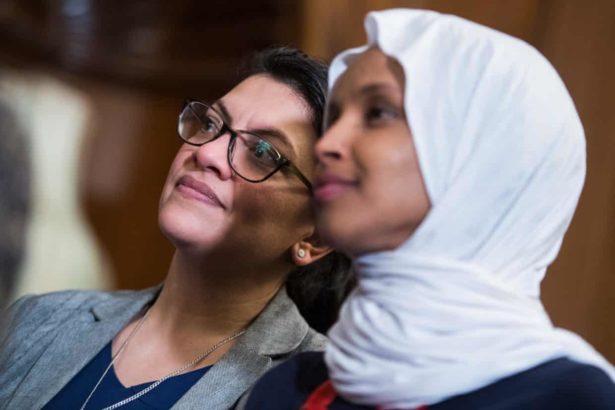 Coordinated Facebook fake news posts made by an Israel-based group have targeted and vilified Muslim politicians such as Democratic congresswomen Ilhan Omar and Rashida Tlaib.

Israeli-based group uses Facebook to spread disinformation to more than a million followers around the world, singling out Muslim US congresswomen.

Two Muslim US congresswomen have been targeted by a vast international operation that exploits far-right pages on Facebook to inflame Islamophobia for profit, a Guardian investigation has found.

A mysterious Israeli-based group uses 21 Facebook pages to churn out more than a thousand coordinated fake news posts per week to more than a million followers around the world. It milks the traffic for revenue from digital advertising.

Ilhan Omar of Minnesota and Rashida Tlaib of Michigan, who earlier this year became the first Muslim women to serve in the US Congress, have been singled out for vicious attacks by the coordinated effort.

Somali-born Omar is the most frequent target. She has been mentioned in more than 1,400 posts since the network began two years ago. Tlaib has been mentioned nearly 1,200 times. Both totals are far higher than any other member of Congress.

Omar and Tlaib are members of a group of progressive women of color known as “the squad” that also includes Alexandria Ocasio-Cortez of New York and Ayanna Pressley of Massachusetts. They have been subject to racist insults from Donald Trump.

The Guardian uncovered contacts between a group of mysterious Israel-based accounts and 21 far-right Facebook pages across the US, Australia, the UK, Canada, Austria, Israel and Nigeria.

The posts exacerbate Islamophobia by amplifying far-right parties and vilifying Muslim and leftwing politicians. Their content is a blend of distorted news and pure fabrication.

An analysis by Queensland University of Technology’s digital media research centre indicated a single entity is coordinating the publication of content across the Facebook pages.

Using web archiving services and domain registry information, the Guardian has been able to confirm a key figure in the network is Ariel Elkaras, a thirtysomething jewelry salesman and online operator living on the outskirts of the Israeli city of Tel Aviv.

Several of the network’s websites were either taken down or had large amounts of content removed soon after the Guardian approached Elkaras for comment. Public posts on his Facebook profile were also deleted.

Elkaras did not respond to multiple requests for comment via email and phone, but the Guardian was able to track him down in the Israeli town of Lod, near Tel Aviv, where he denied involvement in the network. “It’s nothing related to me,” he said through a translator.

The uncovering of the network is likely to fuel concerns that Facebook is failing to tackle disinformation and hate groups ahead of next year’s presidential election in the US.

Abbas Barzegar, director of research and advocacy at the Council on American-Islamic Relations, said:

Spreading disinformation and faux-reporting through pre-networked social media accounts and pseudo-news websites has been the preferred tactic of the Islamophobia industry for a very long time.

These actors create entire media and information ecosystems that inscribe dangerous ideas and narratives in audiences across the world. The impact isn’t personal prejudice, alone. Rather, such disinformation impacts our political climate, actual laws, policies and overall culture.

Somali-born Omar, the first member of the House of Representatives to wear a hijab in the chamber, has been subject to hundreds of online death threats. In September she accused Trump of putting her life at risk after the president retweeted a post that falsely claimed she partied on the anniversary of the September 11 terrorist attacks.

Omar told the Guardian: “As this report makes clear, foreign interference – whether by individuals or governments – is still a grave threat to our democracy. These are malicious actors operating in a foreign country, Israel, spreading misinformation and hate speech to influence elections in the United States. The goal of these anti-Muslim hate campaigns is clear – they put Muslim lives here and around the world at risk and undermine our country’s commitment to religious pluralism.”

She also slammed Facebook for its role in allowing users to spread misinformation.

I’ve said it before and I’ll say it again: Facebook’s complacency is a threat to our democracy. It has become clear that they do not take seriously the degree to which they provide a platform for white nationalist hate and dangerous misinformation in this country and around the world. And there is a clear reason for this: they profit off it. I believe their inaction is a grave threat to people’s lives, to our democracy and to democracy around the world.

When private corporations don’t act, we as a nation need to think seriously about ways to address the spread of misinformation while protecting core values like free speech.

When the Guardian notified Facebook of its investigation, the company removed several pages and accounts “that appeared to be financially motivated”, a spokesperson said in a statement.

“These pages and accounts violated our policy against spam and fake accounts by posting clickbait content to drive people to off-platform sites,” the spokesperson said.

“We don’t allow people to misrepresent themselves on Facebook and we’ve updated our inauthentic behavior policy to further improve our ability to counter new tactics.

“Our investigations are continuing and, as always, we’ll take action if we find any violations.”

Originally posted by the Guardian, which asks readers to support its important investigative journalism.

Neocons tell Democrats how to get rid of Ilhan Omar