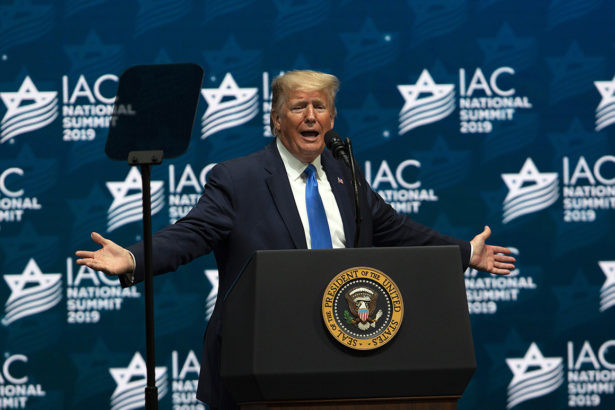 Time for a fact check on U.S. President Donald Trump’s speech to the Israeli American Council Summit in Florida (Dec. 7, 2019)

In his recent speech to IAC, President Trump offered a buffet of falsehoods on Israel: sins of omission, sins of commission, white lies, and whoppers. Time to fact-check.

Last weekend, President Trump gave a speech at the Israeli-American Council National Summit in which he enumerated the many goodies he’s bestowed on both Israel and Israel partisans. It was a long list – and it’s going to get longer.

The Israeli-American Council is composed of Israeli citizens who have also taken US citizenship. It is largely funded by casino magnate Sheldon Adelson, who once said that he regretted serving in the US military instead of the Israeli one.

Let’s take a few minutes to examine (and possibly factcheck) the speech.

Trump started on a grand note:

Today, I’m here to talk about how peace-loving nations can work together to build a future of greater security, prosperity, and hope for our children and generations to come.

He then took a swing at the previous administration for its supposed anti-Israel position:

[The incredible partnership between the United States and Israel] suffered very gravely in the last administration…I don’t think they liked Israel too much. After eight long years in which our alliance was undermined and neglected, I am happy to report that the United States-Israeli relationship is stronger now than ever before.  (Applause.)

FACT CHECK: While Obama at times talked a pro-Palestine talk, he was ineffective (some say he didn’t even try) when it came to policy. In short, when President Obama left office, Palestinians were even worse off than when he started.

Trump went on to tout the qualities that he claimed Americans and Israelis share:

America and Israel are woven together by history, heritage, and the hearts of our people.  We share a love of freedom, democracy, religious liberty, the rule of law, and national sovereignty.

FACT CHECK: Mr. Trump, freedom in Israel is only for some; democracy is impossible due to the apartheid regime; religious liberty is a mirage; Israel lives under the rule of two laws (i.e. apartheid); national sovereignty is only for white Jews.

For those in the US who are not head-over-heels, unconditional lovers of Israel, President Trump encouraged dual loyalty (which is only bad when it is referenced – allegedly – by a Democrat or POC):

Trump then gave a nod to the tragic history of the Jewish people:

The story of Israel is a tale of triumph in the face of centuries of oppression and persecution.  The Jewish people endured, persevered, and flourished beyond measure, building a thriving, proud, beautiful, and mighty nation in the Holy Land.

FACT CHECK: Trump’s whitewashed version of “history” a fails to mention the elephants in the room – the state of Israel was built at incalculable cost to Palestinians, it thrives only because it breaches international law, grabs $10 million every day of US taxpayer money, and tapped into the Rothschild banking fortune, which built its Knesset building, Supreme Court, and national library among other things.

And then Trump began boasting of the myriad injustices he has wrought against the Palestinian people and the US Constitution – speaking as always with more than a touch of self-congratulation.

His saga of the embassy move included a long story (edited somewhat here) that illustrated Trump’s disassociation with common sense:

The Jewish State has never had a better friend in the White House than your President, Donald J. Trump.  (Applause.)  That, I can tell you.

Two years ago this week, I officially recognized Israel’s true and eternal capital, and we opened the American Embassy in Jerusalem, finally.  (Applause.)

And then the time came closer and closer, and I did something that was smart…I said, “Listen, tell these people I’m going to call them back.  I’m so busy.”

…and then I made the announcement at the White House that we’re moving the embassy to Jerusalem and that Jerusalem will be the capital of Israel. Finally, somebody said it.  Right?

FACT CHECK: The Washington Post reported “widespread protests, with tens of thousands gathering across the region to show their anger.” The Israeli military “used tear gas, stun grenades and rubber bullets to break up demonstrations.” In Gaza, live fire was used against protestors, along with airstrikes in return for rockets that had caused no injury. (Sheldon Adelson is reported to have persuaded Trump to make the move.)

Back to the phone calls, which he was now ready to return:

I took about 40 of those calls.  Right?  Everyone was the same: “I wanted to tell you…”  I said, “But, you know, in the meantime, it opened and it was, you know, really pretty amazing.”  It was done.  We did the deal.

It takes a special kind of recklessness to brag about ignoring the advice of dozens of world leaders. But Trump wants supporters more than he wants wise guidance – which explains how he came to came to his decision on the Golan Heights in under a minute:

FACT CHECK: The Golan is not part of Israel, and Trump’s declaration does not alter the illegality of Israel’s annexation. Syrians living in the Golan Heights have been oppressed and occupied by Israel since 1967.

What else did Trump oversimplify?

And as Israel has endured the new wave of rocket attacks in recent weeks, my administration has made clear that America supports Israel’s absolute right to self-defense.  (Applause.)

FACT CHECK: Never mind the fact that those rockets killed no one (and rarely do, and started only after massive Israeli violence); never mind the millions of Palestinians under siege in the Gaza Strip, and their right to self-defense, or the thousands of Palestinians that Israel has killed in numerous invasions and bombings.

We’ve also called for the release of Israeli hostages and the return of the remains of Israeli soldiers captured by Hamas terrorists in Gaza.  (Applause.)

Another thing that no other administration would do…I said, “Did you ever hold back the money [from the Palestinian Authority]?” They said, “No…We didn’t think it was right to do.”  I said, “I do.”  (Laughter.)  “I do.”  So we don’t pay anything anymore.

I signed legislation to withhold U.S. taxpayer dollars from the Palestinian Authority until they stop rewarding terrorists with blood money.  (Applause.)

FACT CHECK: Trump’s oversimplification ignores, first and foremost, that the PA’s program is not about “rewarding terrorists,” but about providing for the families devastated by the Israeli occupation. Every country has compensation programs for both military members and civilians taken prisoner, killed, or injured in the line of duty.

But additionally, Trump’s shallow understanding of the issue fails to account for Israel’s state violence, which the US has tolerated (and subsidized) for decades. (Democratic candidates for president are beginning to question this policy.)

[Billionaire and inordinate pro-Israel donor, Sheldon Adelson told me], “The biggest thing you did for Israel was breaking up and terminating the horrible, one-sided, catastrophic deal that was made by President Obama.”  (Applause.)  Right?

We must never allow a regime that chants “Death to America” or “Death to Israel” to obtain a nuclear weapon.  That’s all we can say.  (Applause.)

FACT CHECK: Just a quick note here on the irrelevance of the Iran issue to the United States: “Iran in 2019 is no danger to U.S. interests anywhere. . . . The U.S. is squeezing Iran mainly because Israel wants it to. . . . Iran is the only regional power that is deterring him [Netanyahu] from completely annexing the West Bank. Iran is also a major supporter of Hamas, the resistance movement in Gaza.”

FACT CHECK: Actually, the UNHRC has denounced dozens of other countries – but that’s beside the point. Israel is in fact guilty of many human rights abuses. Israel self-identifies as a Western-style, modern (albeit Jewish) democracy – in order to live up to the title, it must address the accusations. (If it refuses, the “egregious hypocrisy” resides not in the UNHRC, but in Israel itself – and perhaps its greatest benefactor.)

My administration is committed to aggressively challenging and confronting anti-Semitic bigotry in every resource, and using every single weapon at our disposal.

Recently, the European Union Court of Justice has also tried to discriminate against products made in Israeli settlements, advancing the agenda of anti-Israeli Boycott, Divestment and Sanctions movement, or commonly known as BDS.

FACT CHECK: BDS, and the efforts of the EU Court of Justice, are neither anti-Semitic nor discriminatory. Israeli settlements, however, are illegal under international law. The EU has every right to address this injustice.

President Trump does more than ignore the facts. He makes up “alternative facts”:

My administration has now corrected a longstanding injustice by officially declaring that international law does not prohibit civilian settlements in the West Bank.  (Applause.)

FACT CHECK: International law does prohibit civilian settlements in the West Bank. The words of the President do not have the power to alter the meaning of the Fourth Geneva Convention.

Shockingly, a number of far-left members of Congress have also recently joined the international effort to bully, attack, and denigrate Israel…Earlier this year, a number of prominent Democrat lawmakers sponsored legislation to support the BDS movement.

Make no mistake: Radical lawmakers who support the BDS movement are advancing anti-Israel and anti-Semitic propaganda.  And Americans will not stand for it.  We’re not going to stand for it.  (Applause.)

FACT CHECK: No, Mr. Trump, the majority of Americans will not stand for the infringement on their First Amendment rights – even for Israel. Legislators are the ones who, contrary to the wishes of their constituents, wish to silence BDS. BDS addresses injustice in Israel, which is not an anti-Semitic position.

And the reference to “bullying” Congress members? This is simply the beginnings of a new movement toward honesty about Israel – something that Israel partisans are not used to (hence the “bullying” label) and do not want to continue (hence Trump’s vow to make it stop).

Trump then invited Elan Carr, Anti-Semitism Envoy, to speak for a moment. Carr described his work to punish anti-Semitic hate crimes all over Europe; adopt the (Israel-centric) International Holocaust Remembrance Alliance (IHRA) definition of anti-Semitism; and stifle free speech (i.e. criticism of Israel) on college campuses around the world.

Carr went on to describe (actual) anti-Semitism, (fake) anti-Semitism in the form of criticism of Israel, and the (Islamophobic, manufactured) anti-Semitism of “militant Islam” – all of which, thanks to Trump’s support (in Carr’s starry eyes), are on their way out.

And that was the end of Trump’s to-date list of “accomplishments.” But – as he has demonstrated again and again – every new day brings the possibility of another pro-Israel miracle.

Trump made snap decision on Golan after “quickie” history lesson