You Are Here: Home → Trump Executive Order on “Antisemitism” Combats Criticism of Israel 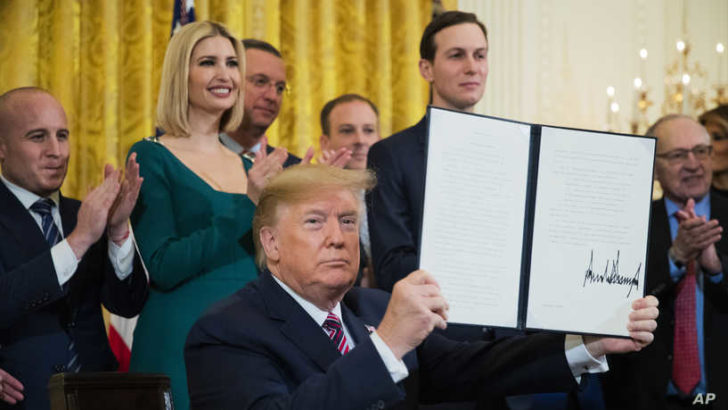 A new executive order is the latest step in the campaign to embed a nontraditional, Israel-focused definition of anti-Semitism in public institutions, thereby preventing negative information about Israel from reaching the public… and impeding the growing movement for Palestinian human rights.

President Donald Trump signed an executive order on Wednesday designed to combat criticism of Israel. During the signing event, he emphasized his support for Israel and called BDS, the international boycott of Israel over its violations of Palestinian human rights, “an anti-Semitic campaign.”

Among those Trump called up to speak at the signing ceremony was former Harvard Professor and Jeffrey Epstein attorney Alan Dershowitz, who proclaimed that the executive order would “go down in history as one of the most important events in the 2,000 year battle against anti-Semitism.” (video below) Dershowitz is the author of The Case for Israel.

A new definition is born

The definition builds on an Israel-focused formulation first created by an Israeli minister, Natan Sharansky, in 2004. This new formulation for defining anti-Semitism has been steadily inserted into institutions throughout the world ever since, from transnational entities to college campuses. Trump’s executive order is the latest incarnation of this campaign. (Citations for this and following paragraphs can be seen here.)

The formulation was first used in a working definition adopted by the European Monitoring Centre on Racism and Xenophobia (EUMC) in 2005. (The Centre had been founded partially for this purpose by Jean Kahn, who had been elected president of the European Jewish Congress at a plenary session in Israel.)

The first such envoy, Gregg Rickman, quickly endorsed the EUMC definition (Rickman later went to work for AIPAC, “American’s pro-Israel lobby“), and the second envoy, Hannah Rosenthal, then adopted it.

With its use, Rosenthal announced, the monitoring of “anti-Semitism had “improved 300 percent.”

A few years later, however, the campaign to embed the new Israel-centric definition of anti-Semitism in institutions worldwide hit a brief bump in the road when the EUMC quietly dropped the definition. The U.S. Office on Anti-Semitism retained it, however, simply removing the link to the original source.

This was considered problematic, however, and Israel partisans began working for a new institution to create a similar definition. Finally, in 2016 the International Holocaust Remembrance Alliance (IHRA), adopted a definition built on the EUMC definition.

LIke the EUMC version, this document contained a short “definition” followed by “examples” to be used in determining anti-Semitism – these are an integral part of the definition. A British attorney noted that “the underlying purpose of the text [is] to neutralise serious criticism of Israel by stigmatising it as a form of antisemitism.”

The U.S. Brandeis Center, an Israel advocacy organization named for the Supreme Court Justice who had led world Zionism for a time in its early years, applauded the move, saying that “because the IHRA has adopted it, the definition has now officially been given the international status that it was previously lacking.”

Another snag, however, came with Trump’s election and his failure to nominate a new Anti-Semitism Envoy, causing numerous Jewish groups to call him anti-Semitic for the delay. Eventually giving in to pressure, in February Trump named Elan Carr the new Anti-Semitism Envoy (Carr’s mother appears to have had Israeli citizenship), and in August Carr updated the abandoned EUMC definition with the IHRA version.

Carr, who was featured at the executive order signing event, quickly made up for lost time, attending conferences in Europe to promote the IHRA definition.

In October he announced at the “Second World Jewish Congress International Meeting of Special Envoys and Coordinators for Combating Antisemitism” that “every law enforcement office and every prosecutorial agency throughout the world” must “force everybody who has even a hint of antisemitism to undergo a tolerance program.”

Trump’s new executive order interprets Title VI of the Civil Rights Act of 1964 as protecting students on school and college campuses from anti-Semitism – as defined by the IHRA definition.

Since the Department of Education can withhold federal funding from any college or educational program that is determined to violate Title VI, the executive order is expected to cause serious financial penalties for campuses that don’t toe the line on Israel, one of the announced objectives of the order.

A senior vice president of the Foundation for Individual Rights in Education points out that university officials are likely to feel “obligated to investigate and punish speech protected by the First Amendment. We know that when the federal government tells colleges and universities to jump, they jump.”

As a result, academic courses, research, and campus events that explore Israel’s founding war of ethnic cleansing, for example, or that investigate Israeli actions that constitute apartheid under international law may be impeded or prohibited despite their factual bases.

Similar legislation had previously been introduced in Congressional bills sponsored by both parties but had stalled over concerns that the legislation would violate Americans’ constitutional right of free speech and interfere with academic freedom.

The American Civil Liberties Union (ACLU) stated that the legislation posed “a serious threat to the First Amendment free speech rights of those on campus who may hold certain political views.”

The ACLU noted: “The First Amendment prevents the federal government from using its great weight to impose severe penalties on a person simply for sharing a political viewpoint critical of Israel.”

In signing the executive order, Trump has fast-tracked a policy that Congress was having trouble passing despite support from both parties, likely pleasing numerous well-heeled supporters, including Trump patron Sheldon Adelson. An executive order is less enduring than legislation, however, and can be overturned by the next sitting president – if the individual has the political will.

If that happens, however, Israel partisans need not despair. Billionaire Israel advocate Ron Lauder has pledged $25 million toward the creation of a new effort called “the Anti-Semitism Accountability Project (ASAP)” that will broadcast TV and radio ads, confront political candidates, and threaten university professors that Lauder considers anti-Semitic (an example of an anti-Semite, according to Lauder, is Bernie Sanders and his statements about Gaza).

Lauder is president of the World Jewish Congress, which recently awarded its Theodor Herzl Award to Nikki Haley for her work on behalf of Israel. Funding for his latest venture is unlikely to be a problem, as Lauder and his brother, heirs of the Estée Lauder cosmetics empire, have a combined net worth of $25 billion.

While Trump’s executive order has been covered in various media reports, many were written without access to its actual text, which the White House withheld for a period of time.

However, Jewish Insider somehow obtained a copy, which is posted below:

By the authority vested in me as President by the Constitution and the laws of the United States of America, it is hereby ordered as follows:

Sec. 2. Ensuring Robust Enforcement of Title VI. (a) In enforcing Title VI, and identifying evidence of discrimination based on race, color, or national origin, all executive departments and agencies (agencies) charged with enforcing Title VI shall consider the following:

(i) the non-legally binding working definition of anti-Semitism adopted on May 26, 2016, by the International Holocaust Remembrance Alliance (IHRA), which states, “Antisemitism is a certain perception of Jews, which may be expressed as hatred toward Jews. Rhetorical and physical manifestations of antisemitism are directed toward Jewish or non-Jewish individuals and/or their property, toward Jewish community institutions and religious facilities”; and (ii) the “Contemporary Examples of Anti-Semitism” identified by the IHRA, to the extent that any examples might be useful as evidence of discriminatory intent.

(b) In considering the materials described in subsections(a)(i) and (a)(ii) of this section, agencies shall not diminish or infringe upon any right protected under Federal law or under the First Amendment. As with all other Title VI complaints, the inquiry into whether a particular act constitutes discrimination prohibited by Title VI will require a detailed analysis of the allegations.

Sec. 3. Additional Authorities Prohibiting Anti-SemiticDiscrimination. Within 120 days of the date of this order, the head of each agency charged with enforcing Title VI shall submit a report to the President, through the Assistant to the President for Domestic Policy, identifying additional nondiscrimination authorities within its enforcement authority with respect to which the IHRA definition of anti-Semitism could be considered.

Sec. 4. Rule of Construction. Nothing in this order shall be construed to alter the evidentiary requirements pursuant to which an agency makes a determination that conduct, including harassment, amounts to actionable discrimination, or to diminish or infringe upon the rights protected under any other provision of law.

Sec. 5. General Provisions. (a) Nothing in this order shall be construed to impair or otherwise affect:

(i) the authority granted by law to an executive department or agency, or the head thereof; or

(ii) the functions of the Director of the Office of Management and Budget relating to budgetary, administrative, or legislative proposals.

(b) This order shall be implemented consistent with applicable law and subject to the availability of appropriations.

(c) This order is not intended to, and does not, create any right or benefit, substantive or procedural, enforceable at law or in equity by any party against the United States, its departments, agencies, or entities, its officers, employees, or agents, or any other person.

The Israeli newspaper Ha’aretz reports that several examples in the IHRA definition “describe criticism against Israel. One such example is ‘applying double standards by requiring of [Israel] a behavior not expected or demanded of any other democratic nation.’ Another example is comparing “contemporary Israeli policy” to that of Nazi Germany.

“These two specific examples are part of the political discourse within Israel itself, and are not limited to one side of the Israeli political divide. It is common for Israeli politicians to say that because Israel is a Jewish state, for example, it should be a “light unto the nations” and demand of itself higher standards than other countries.

“As for comparisons with Nazi Germany, they have been made over the years by political figures from both the Israeli right and left, usually against each other, but also against state institutions such as the police and the military.”