You Are Here: Home → Why AOC panders to the Israel lobby

Why AOC panders to the Israel lobby 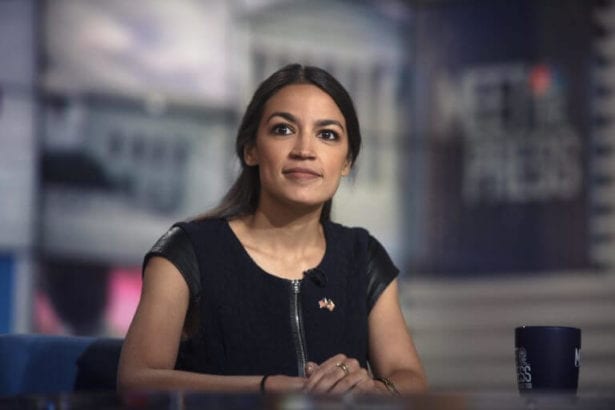 Alexandria Ocasio-Cortez, once a darling of pro-justice-for-all progressives, appears to have taken the low road: exchanging her support for Palestinian rights for pro-Israel campaign funding.

AOC has broken the hearts of many supporters because Israel critics turn into Israel praisers when they have political ambitions. That’s the royal road in the Democratic Party, where the Israel lobby remains an entrenched force. It’s called “Progressive Except Palestine.”

In recent days the left has expressed keen disappointment that star progressive Rep. Alexandria Ocasio-Cortez, an author of the Green New Deal and member of the DSA, went soggy on Palestine, offering an empty speech about people’s rights and refusing to criticize Israel in an interview with a leader of the Israel lobby.

We’ve seen this movie before. Last December then-Georgia Senate candidate Raphael Warnock did a video with an Israel lobby group in order to walk back criticisms of Israel he’d made at the pulpit– notably his description of that 2018 massacre –– “We saw the government of Israel shoot down unarmed Palestinian sisters and brothers like birds of prey.” Now Warnock condemned the BDS campaign targeting Israel and pledged to keep the military aid flowing. And lo and behold, now he is Senator Warnock.

Ali Abunimah writes at EI that AOC just pandered to the lobby, and this won’t be the last time.

Ocasio-Cortez’s path into the arms of the JCRC-NY , the Jewish Community Relations Council of New York– and who knows which Israel lobby group might be next – has been discernible from the start, even if it has had a few detours on the way.

Within weeks of her stunning June 2018 primary win, she already showed signs of buckling under pro-Israel pressure.

Why did she pander? The simplest explanation is that Ocasio-Cortez has political ambitions, and taking on Israel will hurt her.

There is speculation that AOC might run against Chuck Schumer in next year’s primary for the Senate. She has not ruled it out, and Schumer has been tacking left to head off such a challenge. “We’ve already seen a lot of evolution from Schumer on a whole host of issues,” Evan Weber, political director of the Sunrise Movement, told Politico.

Not on Palestine. On Palestine, all the evolution must be AOC’s. When Nancy Pelosi said that if the Capitol crumbled to the ground the one thing that would remain was supporting Israel, she was stating a political verity.

The disappointment here is that this is now an old narrative. When AOC and the Squad came along in 2018, we thought those days were over. Indeed, today many leftwing proposals historically marginalized as radical are on the table, from fossil fuel divestment to reparations. But Palestine is still too far out.

Israel critics turn into Israel praisers when they aspire to higher office. That is still the royal road in the Democratic Party.

Barack Obama was a regular at Palestinian American events in Chicago, to the point of honoring Edward Said, before he ran for Senate in 2004. Then Obama learned to love Israel, and by the time he ran for president was pandering at the AIPAC conference by saying Jerusalem was Israel’s capital.

Samantha Power struck out against the Israel lobby in 2002, saying that it would be necessary to alienate “a domestic constituency of tremendous political and financial import” to impose a two-state solution and end “major human rights abuses” in Palestine. Ten years later when she was trying to win appointment as Obama’s ambassador to the U.N., she deferred to the lobby, cultivating pro-Israel extremists Alan Dershowitz, Elie Wiesel, and Shmuley Boteach, and bragging that she had helped bury the Goldstone report on the Gaza massacre of 2008-2009.

The most obvious cause of these shifts is campaign funding. In 2004, as Obama “became more involved in electoral politics, his financial backers included Chicagoans Lester Crown… several members of the Pritzker family, owners of the Hyatt hotel chain, and another neighbor, Alan Solow, later head of the Conference of Presidents of Major American Jewish Organizations. All were major financial backers of Israel,” Rashid Khalidi wrote in his book, “Brokers of Deceit.”

When Obama tangled with Benjamin Netanyahu over settlements in 2011, his aide Ben Rhodes said that he “was given a list of leading Jewish donors to call to reassure them of Obama’s pro-Israel bona fides.” At the Democratic convention the next year, Obama took personal interest in sticking Jerusalem as Israel’s capital back into the platform, in defiance of an angry Democratic base.

The importance of big Jewish Democratic donors is “gigantic” and “shocking,” per a columnist for the Forward and the head of Emily’s List. The New York Times called it “the elephant in the room” in 2019. “Of the dozens of personal checks greater than $500,000 made out to the largest PAC for Democrats in 2018, the Senate Majority PAC, around three-fourths were written by Jewish donors.”

This effect is surely even more powerful inside the Democratic establishment in New York, which has the largest Jewish population in the country. Alexandria Ocasio-Cortez has to respect that.

This is a structural matter, inasmuch as Jewish liberalism, wealth and cultural influence are not going to change overnight. And Zionism is still a Jewish value: Israel is important to “a vast majority of Jewish New Yorkers,” AOC’s minder from the Israel lobby told her in that interview. One pro-Israel writer put that vast majority at 97 percent of Jews.

That support extends to Jewish politicians and media figures and much of the liberal establishment in the city, on whom any New York politician depends. The renegade anti-occupation Jewish group IfNotNow is a good reflection of the limits of communal opinion, inasmuch as it has not yet endorsed BDS, a red line for the Jewish community.

“Almost everyone is afraid to discuss this topic, it will get you cancelled quickly,” Yale philosophy professor Jason Stanley said recently of “Israel’s occupation of Palestine.”

While Jerry Nadler said that when he voted against the Iraq war, constituents questioned his “commitment to Israel.”

Last year AOC sided with Palestinians who urged her to cancel her appearance at an Americans for Peace Now event honoring Yitzhak Rabin, who was no hero to Palestinians. That was quite a shock to liberal Zionists. AOC is now mending fences.

The Israel lobby is an entrenched force, and AOC surely figures that she has important progressive work to do and spending political capital on Palestine will set back her larger cause. It’s a reminder of her own theory of change — it must come from the grassroots.