You Are Here: Home → Pro-Israel PAC Funds Go to Democrats To Keep Them in Line 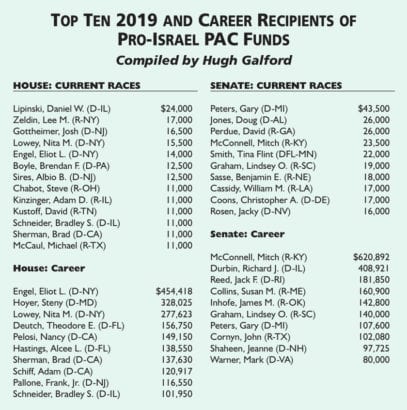 It’s ironic that despite the Trump administration showering gifts on Israel (moving the embassy to Jerusalem, accepting the annexation of the Golan Heights and giving a green light to annexing even more of the West Bank), the pro-Israel Political Action Committees (PACs) gave most of their cash to Democrats. And we don’t even count Super PACs, which can raise funds from individuals, corporations, unions, and other groups without any legal limit on donation size. For those pay a visit to www.OpenSecrets.org.

Even with so many Israeli dreams coming true under a Republican president, the lobby remained staunch Democratic contributors.

As presidential candidate Bernie Sanders surged ahead in the polls, a pro-Israel super PAC called Democratic Majority for Israel, went after him, airing TV attack ads on the man who would have been the first Jewish president. His crime? Sanders called Israeli Prime Minister Binyamin Netanyahu a “reactionary racist” and blasted the American Israel Public Affairs Committee for providing a platform “for leaders who express bigotry and oppose basic Palestinian rights.”

Sanders also said, if elected president, he would leverage the $3.8 in U.S. military aid to push Israel to change its policies toward the Palestinians. Enough said. [Editor’s note: A bill to require American taxpayers to give Israel at least that much every year for the next 10 years is poised to be passed right now, unless enough people object.]

But other candidates won their fights with the pro-Israel lobby. Despite receiving more money from pro-Israel PACs than any other candidate running for a House seat this election cycle, Rep. Daniel Lipinski (D-IL) lost his March primary to a challenger from the left, entrepreneur Marie Newman.

Better known for being the last pro-life Democrat to hold federal office than his support for Israel, Lipinski was nevertheless a dependable pro-Israel vote. In 2014, Lipinski co-sponsored the Protect Academic Freedom Act, which would have denied federal funding to academic institutions supporting a boycott of Israel.

Newman, endorsed by the liberal Zionist group, J Street, issued a lengthy 12-point explainer in 2019, describing her rather mainstream views on Israel/Palestine. She expressed her support for U.S. aid to Israel, a two-state solution, and the right of Israel to exist as a Jewish state. Notably, she did vow to oppose anti-boycott laws that threaten the rights of Americans to boycott Israel.

Lipinski had held his reliably Democratic northern Illinois seat since 2005. He lost the primary to Newman by less than 3,000 votes. Every vote counts, but not every dollar guarantees a win.

Dale Sprusansky is managing editor and Delinda Hanley is executive editor of the Washington Report on Middle East Affairs.