You Are Here: Home → Trump responds to Israeli complaints about US troops exiting Syria: We give Israel $4.5 billion

Trump responds to Israeli complaints about US troops exiting Syria: We give Israel $4.5 billion 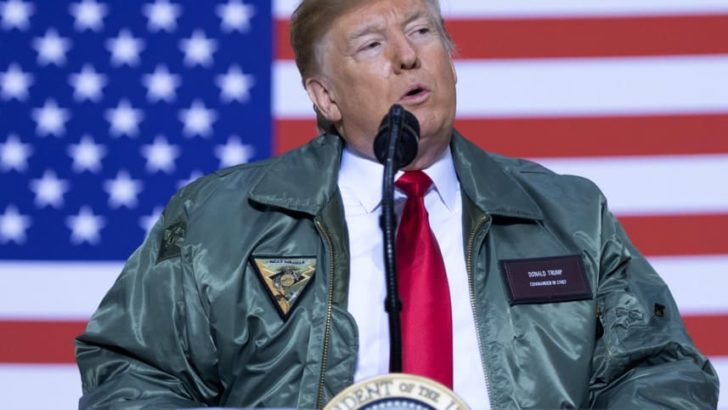 President Donald Trump speaks to members of the U.S. military at Al Asad Air Base in Iraq, December 26, 2018.

Israel partisans have been claiming that Trump’s planned Syria troop withdrawal will leave Israel in danger. Trump pointed out that the U.S. gives Israel billions of dollars…

Israel and its American partisans have been complaining vociferously about President Trump’s recent decision to pull U.S. troops from Syria, a nation that Israel and pro-Israel neocons have long targeted.

When Trump was recently asked at a briefing in Iraq whether the troop withdrawal would leave Israel in jeopardy, Trump responded: “We give Israel $4.5 billion a year. And they’re doing very well defending themselves…”

Trump emphasized: “We’re going to take good care of Israel. Israel is going to be good. But we give Israel $4.5 billion a year.”

While Israeli Prime Minister Benjamin Netanyahu had originally demanded that the U.S. give Israel $4.5 billion per year in U.S. military aid, Netanyahu signed a memorandum of understanding with the Obama administration in 2016 that placed the ceiling at $3.8 billion per year for the next 10 years.

New legislation currently before Congress would make the disbursement law rather than a non-binding agreement, and changed the arrangement to make the $3.8 billion a minimum, with the expectation that the aid will increase in future years. (The bill is currently being held up by Senator Rand Paul.)

Israel’s Ha’aretz newspaper suggests that the difference between the current allocation of $3.8 billion and the $4.5 billion stated by Trump might be due to additional aid to Israel under other budget items:

Ha’aretz reports that in early 2018 the U.S. allocated “over $700 million to supporting Israel’s various missile defense systems, including the Iron Dome system. This was included in the federal spending bill of 2018, and it was an increase of more than $100 million compared to the amount of money provided for Iron Dome and other missile defense systems in the previous year.

“The missile defense support budget is separate from the $3.8 billion Israel will receive under the 2016 agreement signed by Obama and Netanyahu. When the two support budgets are combined, the math behind Trump’s comment becomes clear: 3.8 plus 0.7 adds up to 4.5.”

Ha’aretz posits that the President might be referring to American support for the Palestinian Authority’s security forces, “which received tens of millions of dollars this year from his administration. It is a well-known secret in Washington that the strongest advocates for continued American support of the PA’s security forces are Israeli security and intelligence officials, who want to keep in place the successful coordination between the IDF and those forces.”

The website Mondoweiss points out that Trump has complained about U.S. aid to Israel before: “During the 2016 campaign, he said that Israel should pay for American defense, just as he had called on South Korea, Japan and Saudi Arabia to do. ‘I think Israel will do that also, yeah, I think Israel do—there are many countries that can pay and they [Israel] can pay big league.’”

The difference is that the American lobby for Israel dwarfs the lobbies for other countries.

COMMENTARY: Send the Mad Dog to the Corporate Kennel