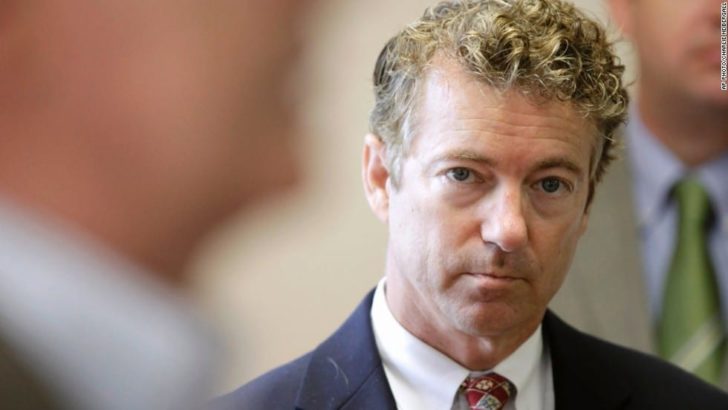 Pro-Israel groups are mobilizing against Sen. Rand Paul for his block on legislation to give Israel $38 billion over the next 10 years. AIPAC is placing Facebook ads & CUFI is sending emails to pressure Paul, “the last obstacle” to Israel obtaining the largest military aid package in US history…

Free Beacon reports that “pro-Israel groups in America are mobilizing against Sen. Rand Paul (R., Ky.) for blocking the continuation of U.S. aid to Israel.”

Paul has placed a “block” on legislation to give Israel $38 billion over the next 10 years – $23,000 per every Jewish Israeli family of four. This is the largest military aid package in U.S. history and amounts to $7,230 per minute to Israel, or $120 per second. A stack of $38 billion dollar bills would reach ten times beyond the international space station.

A block is a legislative procedure in which a senator calls on the floor leader not to move forward with a bill and indicates that the senator may filibuster against it.

Jewish News Syndicate reported last week that the American Israel Public Affairs Committee (AIPAC) had sent an action alert to its members calling on them to pressure Paul to remove his block on the bill, ‘‘S. 2497 Ileana Ros-Lehtinen United States-Israel Security Assistance Authorization Act of 2018.’

Now, according to Free Beacon, a right-wing pro-Israel website, AIPAC has also been purchasing advertisements on Facebook attacking Paul “as the primary Senate force blocking the reauthorization of the U.S.-Israel security pact.”

Another pro-Israel group, Christians United for Israel (CUFI), has also reportedly organized an email blitz to pressure Paul to remove his hold, and has “invested heavily” in ads in Kentucky targeting Rand’s constituents.

According to Free Beacon, “Paul, a proponent of ending U.S. aid across the globe, has had multiple confrontations with the pro-Israel community over the years as result of his views. Paul has sought to hold up U.S. aid to Israel multiple times over the years, creating friction between him and top U.S. pro-Israel lobbying shops.”

Yesterday CUFI sent an email to supporters around the country saying: “Sen. Rand Paul is blocking the U.S.-Israel Security Assistance Authorization Act, S.2497. This bill is the cornerstone of U.S. support for Israel.”

In the message, CUFI calls Paul the “last obstacle to getting this bill signed into law.”

Free Beacon reports that Paul has also recently proposed suspending U.S. arms sales to Saudi Arabia and Bahrain over their attacks on what the Free Beacon calls “pro-Iran militants in Yemen.” Paul has long opposed U.S. support for the attacks on Yemen, which is on the brink of famine and has 50,000 dead.

Israel has long targeted Yemen as one of the countries that must be controlled in its quest for hegemony in the region.