You Are Here: Home → Time for media to tell Americans about the bills in Congress to give Israel $38 billion 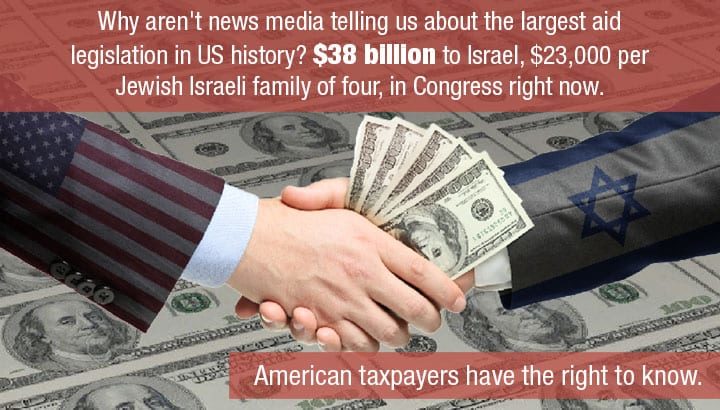 Congress is currently considering legislation to give Israel a total of $38 billion over 10 years, the largest such aid package in U.S. history. Yet, U.S. media are not telling Americans about the legislation, which is before Congress right now…

Legislation to give Israel $38 billion over the next ten years is currently working its way through Congress. This is the largest military aid package in U.S. history.

Yet, while Israeli media are covering the legislation, virtually no U.S. news reports have informed American taxpayers about this proposed disbursement of their tax money.

The proposed military aid amounts to $23,000 per every Jewish Israeli family of four. (Aid to Israel has been on average about 7,000 times greater per capita than U.S. aid to others around the world.)

The proposed aid is divided between two bills. One has already passed, but the main bill is still before Congress.

1. The 2019 military spending bill contains a provision giving Israel 550 million dollars (i.e. $5.5 billion over 10 years). This has already passed both houses of Congress and was signed into law on August 16.

2. A second bill, “United States-Israel Security Assistance Authorization Act of 2018,” is slated to give rest of the package, approximately $33 billion, to Israel. The number is H.R.5141.

This bill has already passed the Senate, and is now being considered in two House committees:  Armed Services and Science, Space, and Technology.[1] (Click on each committee to see its members.)

The reason that the bill was referred to the committee on space is because the bill mandates that NASA work with the Israel Space Agency, despite accusations of Israeli espionage against the U.S.

The $38 billion package was originally negotiated by the Obama administration in 2016,[2] but must now be codified into law.

While U.S. media are inexplicably ignoring this massive aid legislation, Israeli media are covering it regularly, and Israel lobbying organizations are calling on their members to support it. (AIPAC, the American Israel Public Affairs Committee, reportedly pioneered the legislation.)

For example, while U.S. media covered the military spending bill, none of the reports seem to have mentioned the millions of dollars to Israel. This is exemplified by an in depth PBS examination of the bill, which discussed aid to Ukraine – which gets a fraction of the amount promised to Israel – but failed to mention the far larger money to Israel.

We could not find any news reports that tell about the current aid to Israel bill.

In other words, Israelis know about the proposed $38 billion legislation, Israeli partisans in the U.S. know about it and are pressuring Congress to pass it, but the large majority of American taxpayers have no idea the legislation is before Congress.

Indications are that U.S. media are not going to report on these bills unless Americans demand that they do so.

Any Americans who believe the media should report on how American tax money is spent, will need to contact the media, both national and local, and tell them that.

The House will be back in session on September 4th. It’s probable that the bill will move forward quickly at that point. It’s unlikely that the process will involve any public debate whatsoever, unless voters contact their Congressional representatives and demand this.[3]

1. A third House committee, the committee on Foreign Affairs, passed the bill on May 9 and recommended that the full House now consider it “Under Suspension of the Rules, by Unanimous Consent.” (“The purpose of considering bills under suspension is to dispose of non-controversial measures expeditiously.” )

2. The Obama administration’s Memorandum of Understanding gave Israel even more money than it seems to have expected. The Forward reported at the time: “When Yaakov Nagel, Israel’s acting national security adviser, was tasked with heading the team negotiating a new 10-year military aid package with the United States, Prime Minister Netanyahu set forth the guidelines: ‘If you reach $3.5 billion a year, you’ll get a gold medal,’ Nagel recalled Wednesday, hours before signing the agreement in Washington. ‘If you get $3.3 billion you’ll get a silver medal; and if you get $3.1 billion you’ll get the bronze.’” Israel got an MOU for $3.8 billion per year, the largest pledge of military assistance in U.S. history.

A memorandum of understanding (MOU) is a non-binding agreement between two or more parties outlining the terms and details of an understanding. The legislation currently before Congress seeks to make the Obama administration’s 2014 MOU into law.

3. The disbursement is problematic on at least three grounds:  (1) the majority of Americans feel we already give Israel too much money, (2) the aid would violate U.S. laws – see below, and (3) it would fund Israeli violations of international law and human rights abuses, causing tragedy in the region and hostility to the U.S. This has been documented in reports by the Red Cross, Human Rights Watch, Defense for Children, Christian Aid, Amnesty International, Israeli human rights organizations, etc, but these numerous reports, like the current $38 billion legislation, are largely ignored by U.S. media, which consistently provide Israel-centric reporting and fail to give Americans the full picture. 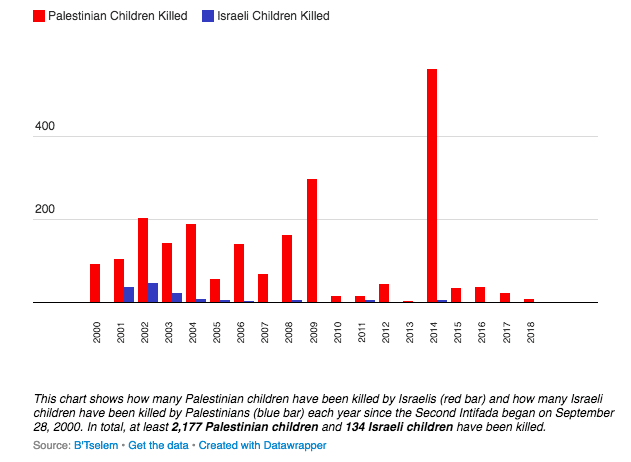 For a timeline of Israelis and Palestinians of all ages killed since 2000 go here.

• It would violate the Leahy Law, which prohibits aid to countries guilty of human rights violations (more info here).