You Are Here: Home → Jaw-dropping declaration: Knesset can make laws everywhere in the world, violate sovereignty of foreign states 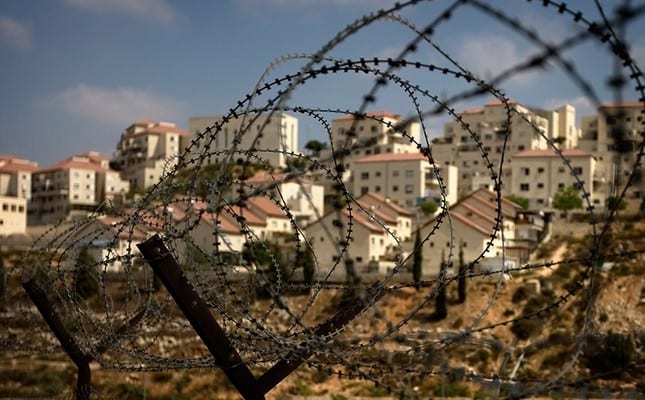 The West Bank Jewish settlement of Beitar Ilit is seen through a barbed wire fence.

The Judea and Samaria Settlement Regulation Law, sometimes called the Regularization Law, is an Israeli law that aims to retroactively legalize Israeli settlements in the West Bank Area C. It is meant to “regulate” the status of about 2,000 to 4,000 residences in 16 settlements which were built on Palestinian-owned lands. The Knesset passed the legislation 60 to 52, on February 6, 2017.

According to the law, the land on which the residences are built will remain that of the legal owners, but their usage will be expropriated by the State. In exchange, the Palestinian owners will be compensated at a rate of 125%, or receive alternate lands (whenever possible).

The Settlement Regularization Law aims to “legalize,” under Israeli law, illegal Israeli settlement outposts, which have been built on private Palestinian land.

The law sets out a new process to legalize about half of Israel’s settlement outposts, as well as about 3,000 additional homes built illegally in settlements, which Israel recognizes as legal. Essentially, this law authorizes a further massive land theft of private Palestinian land by Israel. The European Union and the United Nations strongly condemned the law.

Attorney General of Israel Avichai Mandelblit has announced that he will not be defending the law on behalf of the government at the Supreme Court because he deems it unconstitutional, and it may lead to a suit against Israel at the International Criminal Court. Israeli Justice Minister Ayelet Shaked, whose party The Jewish Home was behind the legislation, responded by saying that the State plans to hire a private lawyer to represent it.

The Israeli occupation of the West Bank is considered a breach of international law by all countries of the world, though Israel disputes this.

2 days after the law was passed, on February 8 2017, a petition was brought before the Supreme Court of Israel by 17 Palestinian local governments and three human rights organizations, to cancel the controversial Settlement Regularization Law under the pretext that it violates international humanitarian law and is unconstitutional.

The petitioners said “the law not only harms the private property of Palestinians, but is also intended to impinge upon their right to dignity by clarifying – without hesitation – that the interests of the settlements and the Israeli Jewish settlers in the West Bank take priority over the rights of Palestinians and therefore is permitted to dispossess Palestinians from their property.”

In a written statement in response to the petition, the Israeli government declared on August 9 that “the Knesset [is permitted] to legislate laws everywhere in the world” and that it is authorized “to violate the sovereignty of foreign countries via legislation that would be applied to events occurring in their territories,” in legal materials it recently submitted to the Israeli Supreme Court.

The petitioners insist that the Knesset is not permitted to enact and impose laws on territory occupied by the State of Israel. Thus, the Knesset cannot enact laws that annex the West Bank or that violate the rights of Palestinian residents of the West Bank.

Attorney Arnon Harel, a private lawyer representing the Israeli government, also wrote in the new materials submitted to the Supreme Court that “the Knesset [is permitted] to impose the powers of the military commander of the [West Bank] region as it sees fit”; “the Knesset [is permitted] to define the authorities of the military commander as it sees fit”; “[the authority] of the Government of Israel to annex any territory or to enter into international conventions derives from its authority as determined by the Knesset”; and that [the Knesset] is allowed to ignore the directives of international law in any field it desires.”

Adalah Attorneys Suhad Bishara and Myssana Morany, who filed the petition against the Settlement Regularization Law, said in response: “The Israeli government’s extremist response has no parallel anywhere in the world. It stands in gross violation of international law and of the United Nations Charter which obligates member states to refrain from threatening or using force against the territorial integrity of other states – including occupied territories. The Israeli government’s extremist position is, in fact, a declaration of its intention to proceed with its annexation of the West Bank.”