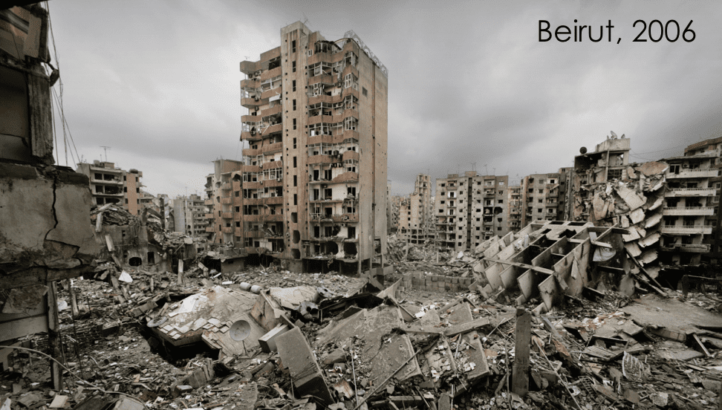 Looking back: In Israel’s 2006 war against Lebanon, Israel used cluster bombs that have a high level of failure to detonate, as well as white phosphorus which is in most cases illegal, and employed launch systems notorious for their inaccuracy. Israel claims everything was done within the bounds of international law – as Israel interprets it – and only in self-defense.

“What we did was insane and monstrous, we covered entire towns in cluster bombs,” the head of an IDF rocket unit in Lebanon said regarding the use of cluster bombs and phosphorous shells during the war.

In addition, soldiers in IDF artillery units testified that the army used phosphorous shells during the war, widely forbidden by international law. According to their claims, the vast majority of said explosive ordinance was fired in the final 10 days of the war.

The rocket unit commander stated that Multiple Launch Rocket System (MLRS) platforms were heavily used in spite of the fact that they were known to be highly inaccurate.

MLRS is a track or tire carried mobile rocket launching platform, capable of firing a very high volume of mostly unguided munitions. The basic rocket fired by the platform is unguided and imprecise, with a range of about 32 kilometers. The rockets are designed to burst into sub-munitions at a planned altitude in order to blanket enemy army and personnel on the ground with smaller explosive rounds.

The use of such weaponry is controversial mainly due to its inaccuracy and ability to wreak great havoc against indeterminate targets over large areas of territory, with a margin of error of as much as 1,200 meters from the intended target to the area hit.

The cluster rounds which don’t detonate on impact, believed by the United Nations to be around 40% of those fired by the IDF in Lebanon, remain on the ground as unexploded munitions, effectively littering the landscape with thousands of land mines which will continue to claim victims long after the war has ended.

Because of their high level of failure to detonate, it is believed that there are around 500,000 unexploded munitions on the ground in Lebanon. To date 12 Lebanese civilians have been killed by these mines since the end of the war.

According to the commander, in order to compensate for the inaccuracy of the rockets and the inability to strike individual targets precisely, units would “flood” the battlefield with munitions, accounting for the littered and explosive landscape of post-war Lebanon.

When his reserve duty came to a close, the commander in question sent a letter to Defense Minister Amir Peretz outlining the use of cluster munitions, a letter which has remained unanswered.

A direct hit from a phosphorous shell typically causes severe burns and a slow, painful death.

International law forbids the use of weapons that cause “excessive injury and unnecessary suffering”, and many experts are of the opinion that phosphorous rounds fall directly in that category.

The International Red Cross has determined that international law forbids the use of phosphorous and other types of flammable rounds against personnel, both civilian and military.

IDF: “No violation of international law”

In response, the IDF Spokesman’s Office stated that “International law does not include a sweeping prohibition of the use of cluster bombs. The convention on conventional weaponry does not declare a prohibition on [phosphorous weapons], rather, on principles regulating the use of such weapons.

“For understandable operational reasons, the IDF does not respond to [accounts of] details of weaponry in its possession.

“The IDF makes use only of methods and weaponry which are permissible under international law. Artillery fire in general, including MLRS fire, were used in response solely to firing on the state of Israel.”

The Defense Minister’s office said it had not received messages regarding cluster bomb fire.