You Are Here: Home → Palestinian Teen Artist Denied Visas to France, UK to Attend Exhibits of Her Own Work

Palestinian Teen Artist Denied Visas to France, UK to Attend Exhibits of Her Own Work 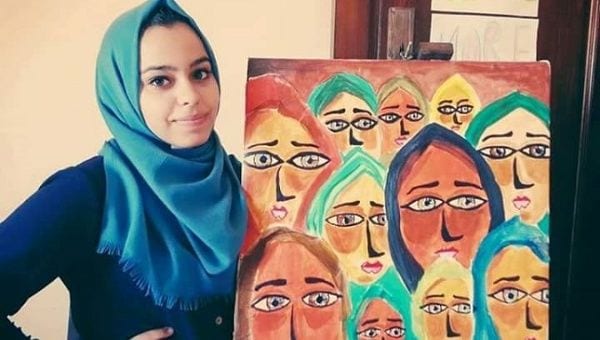 Palestinian artist Malak Mattar has had exhibitions around the world, but has never attended one of them outside Gaza. She has been denied visas recently to the UK and France.

Young Palestinian Artist Malak Mattar from Gaza said Monday that she was refused a visa to France and to the U.K., in order to be present at exhibitions of her own paintings in the European countries.

Malak is a young Palestinian artist who has had exhibitions of her paintings in several countries around the world but has not been able to attend one outside of Palestine. “It seems that the hatred of Palestinians, and the ambition to keep us from traveling and living normal lives, is shared by more than just Israel. However, I will never stop creating art,” she wrote in a Facebook post denouncing the denial of her visa applications.

“My dream is to just have the ability to be present with my paintings and attend my exhibition,” Mattar said after complaining that she was falsely accused of lying on her visa application for the U.K., “including the accusation that I was not a real student and that they didn’t believe my intentions.”

She started her visa application to France, in order to attend two exhibitions, in Paris and in Avignon and to paint in a studio. “I knew I would’ve had a great and warm welcome from my friends in France,” she emphasized. However, despite having handed every required document her visa was denied. “It seemed as if they did not even try.”

As she stresses in her Facebook post, “I had another invitation from the Greenbelt Art festival in England.” So, with the help of the festival organizers, she presented all the U.K. visa required documents, including university and formal invitation letters. “I was so happy and had been dreaming of this chance, everything was perfectly arranged, but then I received my passport,” which is when she found out that, again, her visa for a European country was refused.

Malak Mattar ends her Facebook post asking people to protest the U.K. decision by sending emails to the consulate and asserting that she will never stop creating art, even if “I haven’t been able to see my paintings outside Palestine, and I’m afraid I won’t ever be able to.”

Palestinian art and culture as a battlefield for Israel