You Are Here: Home → Speakers oppose racism in the U.S. while supporting it in Israel

Speakers oppose racism in the U.S. while supporting it in Israel 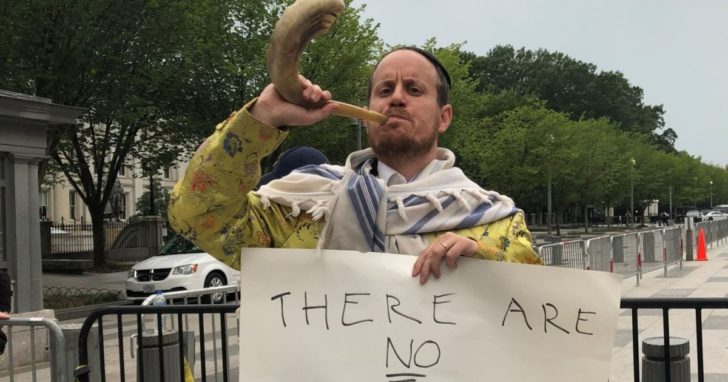 Rabbi Shmuel Herzfeld of Ohev Sholom in Washington, D.C., sounds a shofar in Aug. 12 demonstration against racism. He was ushered to the front of the crowd.

Jewish Insider reports that Rabbi Aaron Alexander, of Washington DC’s prominent Adas Israel synagogue, spoke at the recent “United to Love” rally on the National Mall, one of at least two rabbis to address the crowds.

Rabbi Alexander told JI: “I sounded the shofar — just feet from the Capital Building — for a large and diverse crowd of faith leaders and followers, those who united to share how the power of expansive love brings joy and light in God’s world.”

He continued: “We are in this together—all of us. It is because of our diversity that we generate opportunities for human thriving…”

Rabbi Shmuel Herzfeld of Ohev Sholom, which calls itself “The National Synagogue,” also sounded a shofar in Sunday’s demonstrations. In a first-person piece in Ha’aretz, Rabbi Herzfeld explains why he took part in the counter demonstration against the Unite the Right rally:

“I traveled to their rally with members of our congregation and a shofar in order to blast the sacred sound and drown out their evil words. When the other counter-demonstrators saw that we brought a shofar they quickly ushered us to the front of the crowd so we could be heard loud and clear.”

Rabbi Herzfeld announced: “Racists have no place in America.”

The problem is that while both rabbis oppose racism in the U.S., they support Israel, a nation based on discrimination. Israel was founded in 1948 and recently reaffirmed to be a state favoring one religion and ethnicity, whose flag and national symbols denote that fact, and whose practices often represent a form of apartheid. 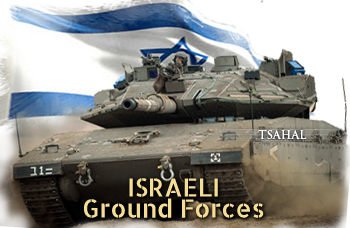 Both rabbis and their synagogues have a history of support for Israel.

Rabbi Herzfeld has been vice president of Amcha, a pro-Israel organization, and once called for the Democratic Party to disinvite President Jimmy Carter from speaking because of Carter’s support for Palestinian human rights. His synagogue, Ohlef Shalom-The National Synagogue, announces that its members are “proud supporters of Israel,” despite Israel’s long record of human rights violations. 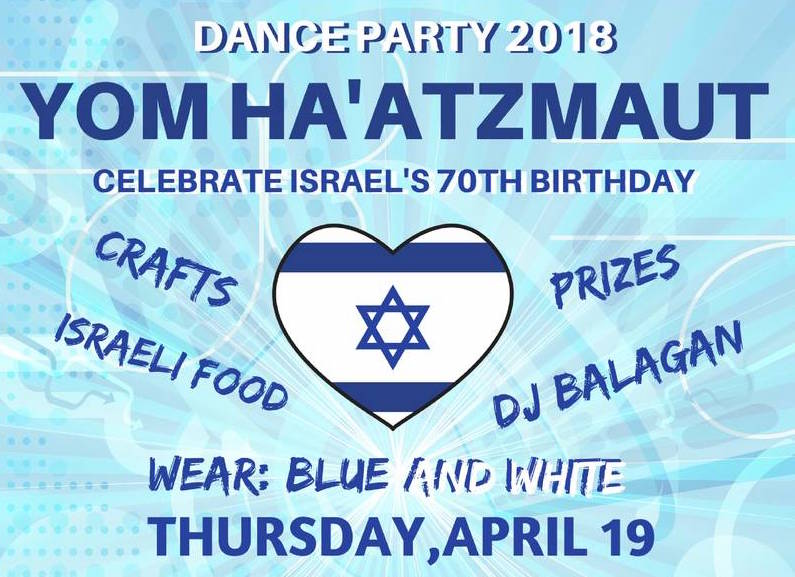 Adas Israel, despite positioning itself as a progressive congregation, similarly promotes Israel, even though an increasing number of Jewish individuals and organizations are speaking out against Israeli oppression of Palestinians.

On its website, Adas Israel announced that it works to “to support the State of Israel” and “encourages all members to deepen their involvement with Israel.” It features an initiative to “affirm our commitment to Israel” and show the congregation’s “love and respect” for Israel.

The synagogue appears to inculcate its congregation and children with loyalty to Israel, featuring events about Israel, trips to Israel, and connections to Israeli soldiers.

In June it announced:  “The Jewish Federation is throwing Israel a 70th Birthday and you’re invited! Enjoy live music, authentic food and fun activities for the whole family. Join community members from across Greater Washington as we celebrate Israel @ 70 in Northern Virginia with a multi-generational, outdoor concert. Enjoy live music by popular Israeli artists, delicious Israeli food, and fun for all ages on the Tysons Corner Plaza, proudly presented by The Jewish Federation.”

The synagogue takes young people on trips to Israel and puts on concerts extolling it: 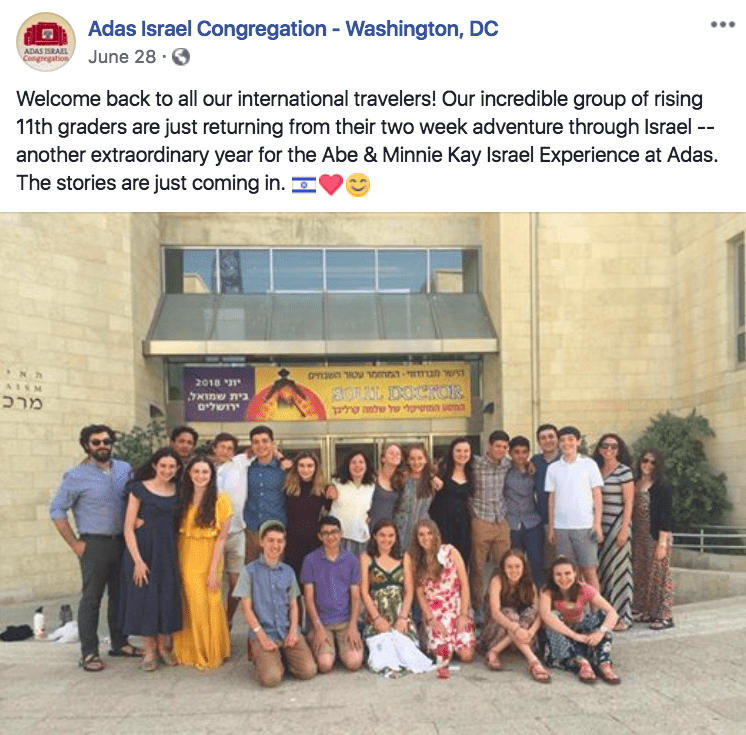 A video of its children’s concert features a map of Israel in which the Palestinian Occupied Territories seem to be part of Israel: 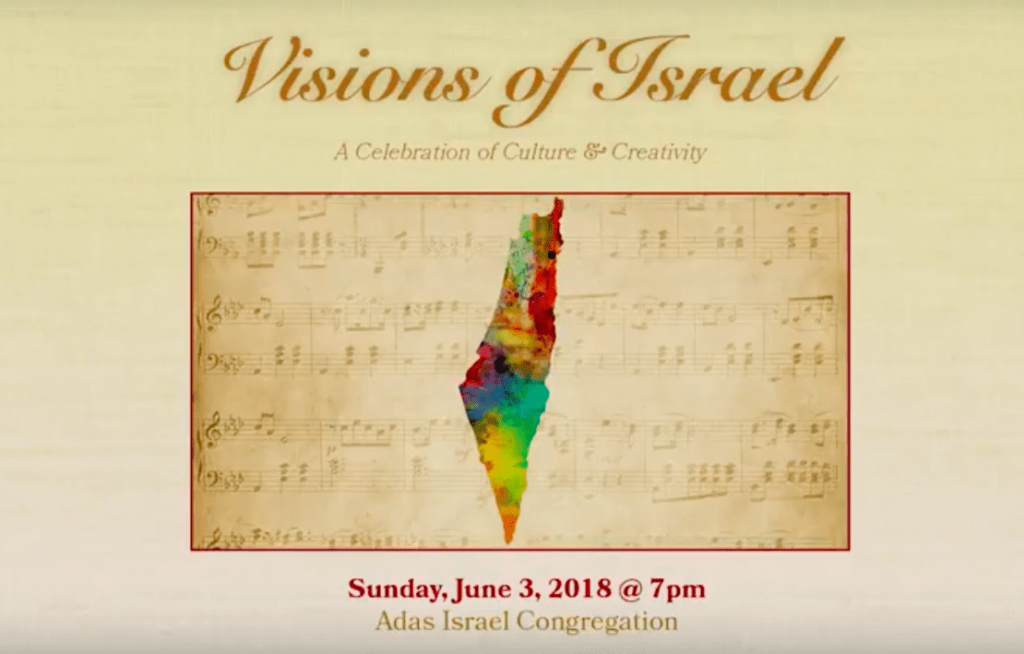 Adas Israel states that it is “a socially-conscious congregation whose contributions bespeak the highest values which our tradition teaches.” A perusal of its website and Facebook page indicate that it does appear to support numerous progressive causes, with one glaring exception: Palestinian human rights.

Its Facebook page promotes participation in the Families Belong Together March:

When a stranger lives with you in your land, do not mistreat him. The stranger living with you must be treated as one of your native-born. Love her as yourself, for you were strangers in Egypt. I am the LORD your God.” (Lev. 19:33-34)

There are certain moments we face that ask not only for our voices, but for our public presence. We now find ourselves in such a moment. Let’s answer that call–and from a distinctly Jewish place–by aligning our actions with our hearts, soulfully pursuing justice.

Our next big opportunity to do so is for the Families Belong Together March on Saturday, June 30, 11 am – 2 pm at Lafayette Square.

We’ll join with Rabbi Alexander on the Connecticut Avenue Plaza in front of the building at 9:45am to receive a kavannah and blessing for the work/journey ahead, and then walk (or metro, for some) to the march…

Yet, while Ada opposes family separation in the U.S, it fails to oppose Israel’s systemic discrimination against Palestinian families, and Israeli policies that separate husbands from wives, parents from children.

Baroud reports: “Even before Israeli companies jumped on the chance to build Trump’s wall, Israeli Prime Minister, Benjamin Netanyahu, tweeted approvingly of Trump’s “great idea”, claiming that Israel’s own wall has been a “great success” for it “has stopped all illegal immigration.”

Despite the fact that there has been a massive, unarmed uprising in Gaza in which Israeli forces have killed over 160 men, women, and children, and injured over 1,700, a search for the keyword “Gaza” on the website of this “socially conscious” institution fails to turn up a single entry. 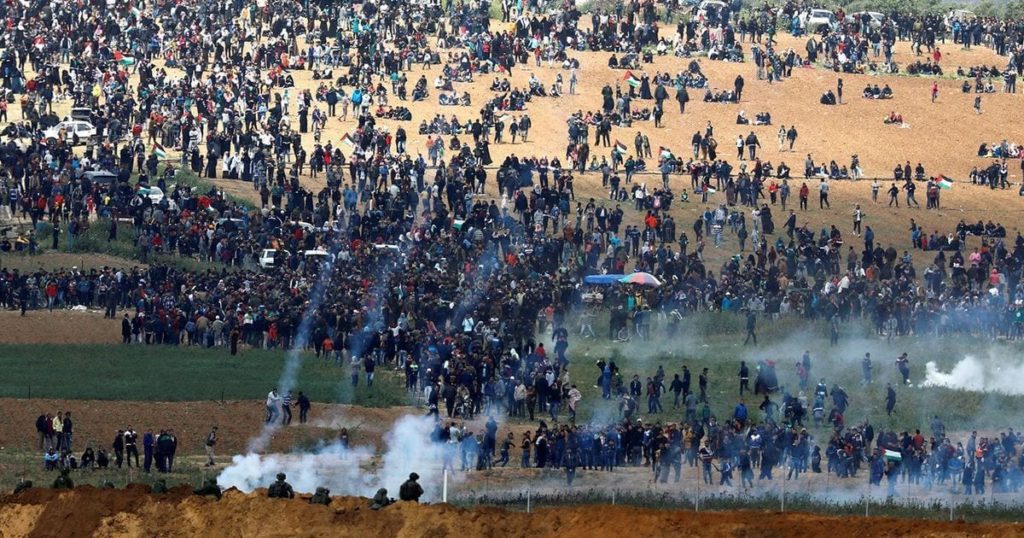 Adas Israel appears to hold considerable clout. One of its rabbis notes: “Jewish Americans are prospering, reaching the top echelons of privilege and
power,” and there is no doubt that Adas is a major player in D.C, with numerous U.S. Presidents, Vice Presidents, and Supreme Court Justices coming to speak (more info here.)

Such an institution, which often opposes oppression and supports justice, could have a significant impact on supporting Palestinian human rights. But instead of using its power to work for justice and peace, it seems to be among the many “PEPs” – progressive except for Palestine.

Rabbi Alexander, who spoke so eloquently at the August 12th event against racism, opposes white supremacy in the U.S., but doesn’t speak out against Jewish supremacy in Israel.

He endorses diversity in the U.S., but doesn’t appear to call for it in Israel. He favors equal rights for all, but doesn’t seem to do so for Palestinian Muslims and Christians treated as second class citizens in Israel. He opposes gun violence in the U.S. but doesn’t seem to bothered by Israeli gun violence against Palestinians. He’s a member of Rabbis Against Gun Violence (in the U.S.) but not a member of T’ruah: The Rabbinic Call for Human Rights, which includes Palestinians among those whose human rights should be protected.

Rabbi Alexander supports housing programs in the U.S., citing his “values as a rabbi.” He testified in Washington DC that the five books of Moses frequently mention “how we treat the stranger, those among us with little or no shelter,” and concluded that there is a “moral imperative” to provide homes for people.

However, Rabbi Alexander doesn’t seem to let this moral imperative interfere with his support for Israel, despite Israel’s decades-long program of demolishing Palestinian homes.

Rabbis Alexander and Herzfeld are hardly alone in their conflicted stance.

Rabbi Tom Gutherz of Congregation Beth Israel in Charlottesville is another who recently spoke out against racism. In response to Unite the Right plans, he wrote a letter calling for “dismantling the racial injustices.”

There is no indication that the individuals on these trips learn about the situation for Palestinians in Israel itself, the West Bank, or Gaza:

As more Americans learn the facts about Israel’s treatment of Palestinians, being “progressive except for Palestine” is becoming increasingly untenable.

Recently, Jewish students on Birthright propaganda trips to Israel publicly walked out. They opened their eyes to injustice and refused to be part of it. Perhaps eventually Rabbis Alexander, Herzfeld, and Gutherz will join the journey these young people have begun.

JTA reported on August 10th : “Jewish groups in the Washington, D.C., area launched a weekend of counterprotests and teach-ins ahead of a planned white supremacist commemoration of the deadly march last year in Charlottesville, Virginia.”

Alison Weir is the founder and executive director of If Americans Knew, and the author of Against Our Better Judgment: The Hidden History of How the U.S. Was Used to Create Israel.