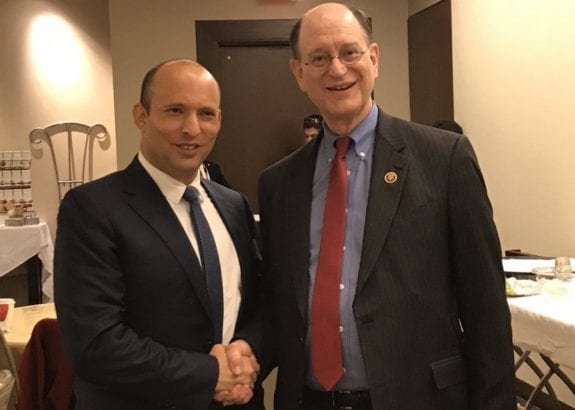 WASHINGTON (JTA) — The three U.S. House of Representatives Democrats seeking the influential chairmanship of the Foreign Affairs Committee are meeting with donors and staff of pro-Israel groups and asking them to lobby the party leadership.

Reps. Brad Sherman of California, Gregory Meeks of New York and Joaquin Castro of Texas have or will soon have Zoom meetings with the Democratic Majority for Israel, a group that embraces pro-Israel policies close to the establishment pro-Israel community, as well as with J Street, the liberal Jewish Middle East policy group.

Eliot Engel of New York, the current committee chairman, was defeated in a primary this summer by a progressive, Jamaal Bowman. Engel is seen as one of the most reliable pro-Israel voices in Congress and opposed the Iran deal. Whoever replaces him will face growing calls from the party’s left-wing to put more pressure on Israel when it comes to reaching a two-state agreement with the Palestinians.

In the DMFI meetings, Meeks and Sherman clarified what appeared to be their earlier endorsement of a proposal, popular among the party’s left, that Congress should ban assistance to Israel from being used to annex parts of the West Bank. They said they were simply pointing out that defense assistance cannot in any case be used for annexation or for other uses. Castro is set to meet with DMFI on Monday evening.

Meeks met privately with J Street last week, and meetings with Castro and Sherman are scheduled for this week. J Street has said it favors pressuring Israel to keep it from annexing territory.

Israeli Prime Minister Benjamin Netanyahu had said earlier this year he is ready to annex parts of the West Bank, but instead forged a normalization deal with Bahrain and the United Arab Emirates that was contingent on putting aside the annexation plans. [This appears to be temporary]

Democrats are expected to retain their majority and control of committees after the Nov. 3 election.

Committee chairmanships are decided by caucus votes but are heavily influenced by the preferences of Speaker Nancy Pelosi and the caucus leadership. Democratic donors, among them those whose main issue is Middle East policy [e.g. Haim Saban], lobby the leadership to advance favored lawmakers to leading positions.