You Are Here: Home → Netanyahu Pushes Trump Toward Wider Wars 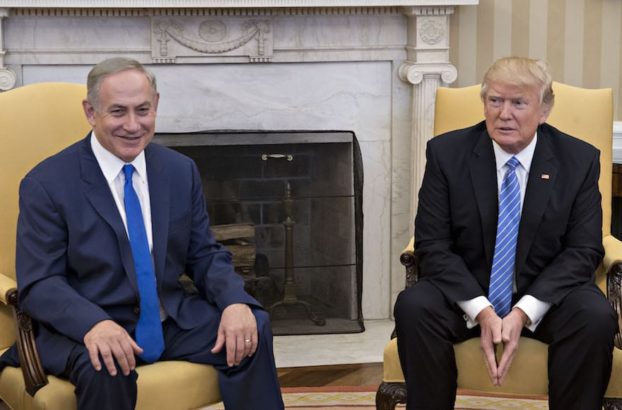 A weakened, even desperate President Donald Trump must decide whether to stand up to Israeli Prime Minister Benjamin Netanyahu or to repudiate the Syrian partial ceasefire, which Trump hammered out with Russian President Vladimir Putin on July 7.

Whether intentionally or not, this crossroads is where the months of Russia-gate hysteria have led the United States, making Trump even more vulnerable to Israeli and neoconservative pressure and making any cooperation with Russia more dangerous for him politically.

After meeting with French President Emmanuel Macron in Paris on Sunday, Netanyahu declared that Israel was totally opposed to the Trump-Putin cease-fire deal in southern Syria because it perpetuates Iranian presence in Syria in support of the Syrian government of President Bashar al-Assad.

Netanyahu’s position increases pressure on Trump to escalate U.S. military involvement in Syria and possibly move toward war against Iran and even Russia. The American neocons, who generally move in sync with Netanyahu’s wishes, already have as their list of current goals “regime changes” in Damascus, Tehran and Moscow – regardless of the dangers to the Middle East and indeed the world.

At the G-20 summit on July 7, Trump met for several hours with Putin coming away with an agreed-upon cease-fire for southwestern Syria, an accord that has proven more successful than previous efforts to reduce the violence that has torn the country apart since 2011.

But that limited peace could mean failure for the proxy war that Israel, Saudi Arabia, Turkey and other regional players helped launch six years ago with the goal of removing Assad from power and shattering the so-called “Shiite crescent”from Tehran through Damascus to Beirut. Instead, that “crescent” appears more firmly in place, with Assad’s military bolstered by Shiite militia forces from Iran and Lebanon’s Hezbollah.

In other words, the “regime change” gambit against Assad’s government would have backfired, with Iranian and Hezbollah forces arrayed along Israel’s border with Syria. And instead of accepting that reversal and seeking some modus vivendi with Iran, Netanyahu and his Sunni-Arab allies (most notably the Saudi monarchy) have decided to go in the other direction (a wider war) and to bring President Trump along with them.

Trump – a relative neophyte in global intrigue – has been slow to comprehend how his outreach to Netanyahu and Saudi King Salman runs counter to his collaboration with Putin on efforts to defeat the Sunni jihadist groups, including Al Qaeda and Islamic State, which have served as the point of the spear in the war to overthrow Assad.

Al Qaeda and Islamic State have received direct and indirect support from Saudi Arabia, the Gulf States, Turkey, Israel and even the Obama administration, albeit sometimes unwittingly. To block Assad’s overthrow – and the likely victory by these terror groups – Russia, Iran and Hezbollah came to Assad’s defense, helping to turn the tide of the war since 2015.

In his nearly half year in office, Trump has maintained an open hostility toward Iran – sharing a position held by Washington’s neocons as well as Netanyahu and Salman – but the U.S. President also has advocated cooperation with Russia to crush Islamic State and Al Qaeda inside Syria.

Collaboration with Russia – and indirectly with Iran and the Syrian military – makes sense for most U.S. interests, i.e., stabilizing Syria, reversing the refugee flow that has destabilized Europe, and denying Al Qaeda and Islamic State a base for launching terror strikes against Western targets.

But the same collaboration would be a bitter defeat for Netanyahu and Salman who have invested heavily in this and other “regime change” projects that require major U.S. investments in terms of diplomacy, money and military manpower.

So, in last weekend’s trip to Paris, Netanyahu chose to raise the stakes on Trump at a time when Democrats and the U.S. mainstream media are pounding him daily with the Russia-gate scandal, even raising the possibility that his son, Donald Trump Jr., might be prosecuted and imprisoned for having a meeting in June 2016 with a Russian lawyer.

If Trump wants the Russia-gate pain to lessen, he will be tempted to give Netanyahu what he wants and count on the savvy Israeli leader to intervene with the influential neocons of Official Washington to pull back on the scandal-mongering.

The problem, however, would be that Netanyahu really wants the U.S. military to complete the “regime change” project in Syria – much as it did in Iraq and Libya – meaning more American dead, more American treasure expended and a likely wider war, extending to Iran and possibly nuclear-armed Russia.

That might fulfill the neocon current menu of “regime change” schemes but it runs the risk of unleashing a nuclear conflagration on the world. In that way, liberals and even some progressives – who have embraced Russia-gate as a way to remove the hated Donald Trump from office – may end up contributing to the end of human civilization as well.

Investigative reporter Robert Parry broke many of the Iran-Contra stories for The Associated Press and Newsweek in the 1980s. You can buy his latest book, America’s Stolen Narrative, either in print here or as an e-book (from Amazon andbarnesandnoble.com).