You Are Here: Home → Schumer, ‘guardian of Israel,’ calls anti-Zionism a form of antisemitism [videos] 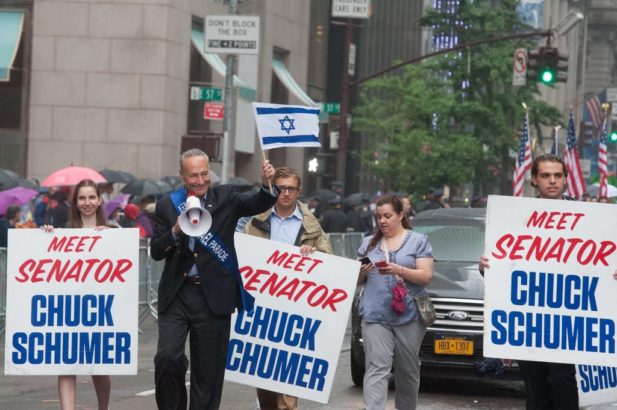 In a recent speech on the Senate floor, New York Senator Charles Schumer said that anti-Zionism is a form of anti-Semitism. (In a 2010 speech Schumer said that God made him a ‘guardian of Israel’ – see below).

Schumer, the Senate minority leader, made his remarks at the end of a speech on health care. Schumer said he wanted to thank French President Emmanuel Macron for his recent comments claiming that anti-Zionism was antisemitism.

Schumer claimed that the Boycott, Divestment and Sanctions (BDS) movement, an extremely diverse movement that includes many Jewish individuals and groups, is “antisemitic.”

Schumer said: “The global BDS movement is a deeply biased campaign that I would say, in similar words to Mr. Macron, is a ‘reinvented form of anti-Semitism’ because it seeks to impose boycotts on Israel and not on any other nation.”

The claim that criticism of Israel is antisemitic has been promoted by an international campaign working to embed this as a new definition of “antisemitism.”

Schumer says he is a ‘guardian of Israel’

In 2010, Schumer told an AIPAC convention: “As some of you know, my name is a Hebrew word. “Schumer” comes from the Hebrew word “Shomer,” which means “guardian,” “watchman.”

Schumer said his name was given to him “for a reason”:

“For as long as I live, for as long as I have the privilege of serving in the Senate from New York, I will unflinchingly, unstintingly and with all of my strength be Shomer Yisrael, a guardian of Israel. Ladies and gentlemen, Am Yisrael Chai, in Israel and America, the Jewish nation lives now and forever.”