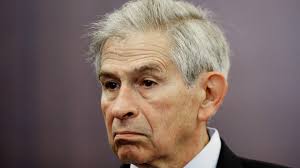 Nathan Guttman reports in The Forward

Neoconservatives die hard, and Paul Wolfowitz, one of the leaders of this school of thought, is no exception.

The former deputy defense secretary during the Iraq and Afghanistan wars has reemerged in the spotlights, calling on the new administration to assert a bold American stance in the Middle East and expressing reserved optimism about President Trump’s chances of doing so.

“I don’t think anyone would deny that he’s opportunistic, and I don’t think anyone would deny that he would like to be ‘the greatest president in modern times’ or ‘huge’ or you pick your adjective,” Wolfowitz told the Global Politico podcast. “And I think to achieve a Dayton-like peace settlement in Syria would not only be something that would be widely acclaimed, it would be hugely in the interest of the United States [sic].”

Wolfowitz has been preaching for increased American involvement in Iraq and in Syria, despite what he acknowledges is a lack of enthusiasm in America for “heroic ventures in the Middle East.” He has also conveyed his thoughts to National Security Adviser H.R. McMaster and to Defense Secretary James Mattis. Trump’s decision to launch a missile attack against Syria following the use of chemical weapons by Bashar al-Assad has given Wolfowitz reason to believe Trump may be up for a greater role in the Middle East, as long as he doesn’t see the attack as a one-off.

“I think there is a fantastic opportunity here. It’s only a first step, it’s only an opportunity,” Wolfowitz said in the interview. “If nothing is done to follow up on it, it will start to seem a little bit silly in retrospect; certainly the enthusiasm will seem silly. But more importantly it will look like a lost opportunity in retrospect.”

Wolfowitz, who has been called “over the top when it comes to Israel,” was a major architect of the Iraq war.

Related: Trump’s “Muslim ban”: Israeli strategic plans to “remake the Middle East” from 2001 and before targeted the same countries