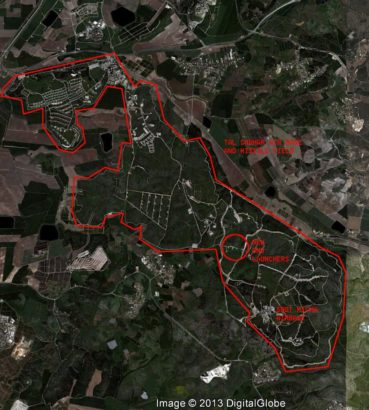 Many (though not all) of Israel’s security secrets are of the worst-kept variety.  An example, is the Israeli Air Force nuclear weapons base known variously as Sdot Ha’Elah or Sdot Micha.  Readers of this blog would’ve read of the name and purpose of this base back in 2010 based on my publication of a censored report about the facility.  You would’ve seen a map of the facility and its location if you’d read this post back in 2013.  You would’ve also learned that the base is home for Israel’s new Arrow 3 anti-ballistic missile fleet charged with defending Israel from a missile attack.

Among other things, its command and control center was built to withstand a nuclear blast. Though that nuclear blast will not come from Iran, since it doesn’t have such a nuclear capability. This is the new portion of the base that was paid for by U.S. funds to the tune of over $25-million. Sdot Micha also houses Israel’s Jericho 3 ballistic missile inventory.  These are the weapons that would be used to annihilate Iran should Benny Morris get his way and Israel attack it with nuclear weapons.

If you were an ordinary Israeli who only read the Israeli papers, you wouldn’t have even learned the name of the base until today, when it was exposed publicly for the first time in Haaretz.  Even then, you still wouldn’t know that Sdot Micha was Israel’s nuclear base since that information was censored from the Haaretz report.

In a different post, a few years after that, a nosy reporter visiting the IDF military headquarters, the Kirya, noticed a list of senior officers and their coffee preferences.  Among them, I noted, was then Col. Uri Oron.  The list showed his command, the very same secret Sdot Micha.  So readers here then learned his identity.  In the meantime, Oron has been promoted to IAF intelligence chief.  In his place they named a Col. Binyamin (first name) to succeed him.  Since no reporter has snooped around the Kirya for a new coffee list, we don’t yet know his full name. If any readers can help, please be in touch.  I think every Israeli has the right to know which officer has his finger on the nuclear trigger.

This information was published by the IDF (Hebrew) as part of its responsibility to release information the public has a right to know. However, the public didn’t have a right to know about the existence of Sdot Micha (mentioned on pg. 36).  This was probably a result of a fashla involving chief military censor, Col. Ariella Ben Avraham.  She must’ve been asleep at the wheel when this report was reviewed by her eagle-eyed censors.

Consider tonight’s post part of my public service on behalf of Israelis who believe they have a right to know who has their fate in his hands. And if you support such transparency then support this blog with a donation either through Paypal or Network for Good.  This work is painstaking and requires enormous discipline and dedication.  No one else is doing precisely this in the public domain.  It’s worth your support.