You Are Here: Home → Mainstream media gets it wrong on Gaza AGAIN

Mainstream media gets it wrong on Gaza AGAIN 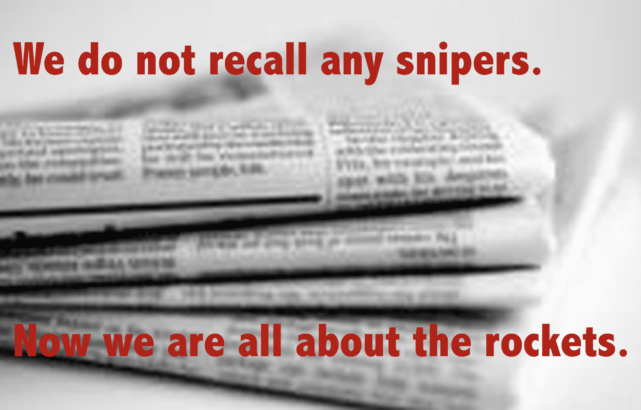 The New York Times, the Washington Post, and CNN are 3 examples of the selective amnesia from which nearly every mainstream media news source seems to suffer when it comes to the subject of Israel. It doesn’t take much digging to discover the actual truth – the context that completely changes the story.

Palestinians of Gaza have been peacefully protesting for 2 months, unarmed, demanding only their human rights. They have been met with Israeli sniper fire week after week, killing at least 118.

And the United States hasn’t blinked.

Grant Smith of antiwar.com points out that “a stunning 81.5% of Americans say they never heard about the massacre through any channel,” which perhaps explains our apparent apathy.

Mainstream media reports on incidents in Palestine-Israel, but its effectiveness as a source of accurate information is questionable. For example, most Americans don’t even know who is occupying whom.

On May 29, 2 weeks after the bloodiest day of protesting – in which at least 60 Palestinians were killed and thousands were injured – several factions in Gaza had enough and began shooting rockets toward Israel. Israel naturally responded with airstrikes from warplanes.

Mainstream media, with its short-term memory loss in all matters Israeli, forgot about the context of unarmed Palestinian protest and sniper fire, describing the Gazan rockets almost as though they represented an unprovoked attack on a peaceful state.

It is not hard to see that, when there is coverage, MSM tends to come down firmly on the side of Israel. In the interest of accurate education of American readers, we provide the following corrections of recent articles.

The New York Times published on May 29:

NYT: Islamic militants in Gaza attacked southern Israel with rockets and mortars on Tuesday and Israel responded instantly with a wave of airstrikes across the Palestinian territory, a sharp escalation of violence after weeks of deadly protests, arson attacks and armed clashes along the border.

Everything about this paragraph is problematic.

Let’s talk chronology first: since March 30th there have been 9 weekends of nonviolent protests by Gazans, which were met by Israeli sniper fire, killing at least 118 and injuring 13,000. The number of Israeli casualties: ZERO. The “deadly protests” were only deadly for Palestinians, who were unarmed. During this time, no rockets or mortars were fired out of Gaza. When “militants” responded after 2 months of Israeli violence, the NYT called it “an attack,” and Israel’s action “a response.”

NYT: The exchanges were the most intense cross-border hostilities in Gaza since the two sides fought a 50-day war in the summer of 2014.

Similarly, the “two sides” that fought in 2014 included 34,000 unguided shells shot into Gaza by Israel (including 19,000 high-explosive artillery shells, which form a crater 50 feet wide and 36 feet deep, penetrate up to 15 inches of metal or 11 feet of concrete), and 4,500 rockets shot into Israel by Gaza. No wonder 72 Israelis (mostly military) vs. 2,200 Palestinians (mostly civilians, including 500 children), died in that “war.”

The “cross border hostilities” in 2014 and this week were similarly lopsided.

NYT: By 10 p.m. on Tuesday, Israel said there had been 70 rockets or mortars fired from Gaza throughout the day.

This may sound frightening, and it would indeed be unnerving to endure. But context matters: in 14 years of rockets from Gaza, only 17 Israelis have been killed during peacetime, and 44 total.

NYT: Tensions have been spiraling along the border in recent weeks during a series of Palestinian protests against the 11-year blockade of the Gaza Strip and to press Palestinian claims to lands in what is now Israel. Israel insisted that it was not seeking to escalate, and that it was up to Hamas to decide whether to ratchet things up or stand down.

We applaud NYT for mentioning the 11-year blockade and Palestinian claims to land in what is now Israel. Don’t be in such a rush, though, NYT. Linger over the blockade for a moment – at least long enough to help your readers understand the truth. The blockade is against international humanitarian law.The blockade is keeping food and medicine out of Gaza, and has done so for over a decade.

NYT: Early Wednesday, Israel announced a new wave of airstrikes against 25 more Hamas targets in Gaza, saying it was holding Hamas responsible for conducting and allowing a “wide-scale attack against Israeli citizens.” (3 Israeli soldiers were injured.)

The United States called for an emergency meeting of the United Nations Security Council to discuss the latest attacks on Israel from Gaza and said it expected the session to be held on Wednesday afternoon…[US ambassador to the UN Nikki Haley said], “The Security Council should be outraged and respond to this latest bout of violence directed at innocent Israeli civilians.”

It’s puzzling that the US sees Gaza’s nonlethal rockets as worthy of outrage, but Israel’s snipers killing over 100 as unworthy of comment.

NYT: As many as 120 Palestinians have been killed by Israeli fire since March 30, according to the Gaza Health Ministry, mostly by snipers during the protests and half of them in a single day, May 14, the peak of the campaign.

Israel said it was defending its border and the nearby communities against a mass breach by the protesters, adding that Gaza militants intended to use unarmed civilian protesters as cover to infiltrate Israeli territory and attack Israeli soldiers and civilians.

Oh, NYT, you started strong there, acknowledging the Palestinian deaths and the snipers. But then you gave your readers only Israel’s explanation (“Gaza militants intended to use unarmed civilian protesters as cover”) as though this was an indisputable fact instead of an opinion. A comment from a Palestinian spokesperson would have been in order at this juncture.

The Washington Post was similarly one-sided in its May 29 coverage:

WaPo: “This is something we cannot tolerate,” said [Israeli army spokesman Lt. Col. Jonathan] Conricus. “Hamas is turning the fence into an active combat zone, and we cannot tolerate attacks on Israeli civilians and military targets.”

Interestingly, even Ha’aretz has conceded that the Great March of Return is not a “Hamas project,” but a grassroots movement by people who are deeply invested in resistance and return. But WaPo prefers the official Israeli spin, that “Hamas is turning the fence into an active combat zone,” in spite of the obvious fact that one side of the fence has no combat weapons. There is also, apparently, nothing noteworthy in the statement, “we can not tolerate attacks on Israeli civilians and military targets” (as if Palestinians do not have the same right to be intolerant of violence being perpetrated on their people).

WaPo: Tensions have been soaring between Israel and Gaza for the past few months. Residents of the coastal enclave, which has been under land and sea blockade by Israel and Egypt since Hamas wrested power over the strip more than a decade ago, have been holding weekly demonstrations at the Israeli border fence. They are demanding a right to return to land that now sits inside Israel and expressing frustration over a growing humanitarian crisis in what they describe as an open-air prison.

WaPo came so close to getting the paragraph right. Fact is, Hamas did not “wrest power over the strip.” Rather, Hamas won a free and open election – which the US encouraged.

CNN likewise managed, on May 29, to miss the point:

CNN: In a statement, the IDF said the [launching of mortars and rockets by Gazans] was a “severe, dangerous, and orchestrated act of terror, aimed at Israeli civilians and children.”

The degree of self-deception required for the IDF to make such a statement is staggering. The “severity” and “danger” of Gaza rockets is minor in comparison to Israel’s snipers; the label “act of terror” belongs with the side that has been killing unarmed protesters; likewise, the targeted “civilians and children” were the ones killed (at least 12 children out of 118 dead) and injured (about 1,000 children out of over 13,000 injured).

“Such attacks are unacceptable and undermine the serious efforts by the international community to improve the situation in Gaza.”

Bottom line, these mainstream media articles were not aberrations, but business as usual. Every day in Gaza has yielded either similarly inaccurate news, or radio silence – the one exception perhaps being May 14, 2018. On that day there was opportunity for a dazzling visual display on every news channel: a split-screen exhibition contrasting the high-class, clueless crowd at the opening ceremony of the US embassy in Jerusalem, with the Israeli violence and Palestinian carnage at the Gaza border. For that brief moment, many commentators pointed out Israeli aggression against a besieged people group.

Shortly after that day, reporters’ memories were erased, and Gazans are once again aggressors and followers of Hamas. Avigdor Lieberman is correct again: there are “no innocent civilians in Gaza.”

Life is back to normal.