You Are Here: Home → Gaza Palestinians plan for mass protests to end the blockade and occupation; call for supporters around the world to mobilize in solidarity

Gaza Palestinians plan for mass protests to end the blockade and occupation; call for supporters around the world to mobilize in solidarity 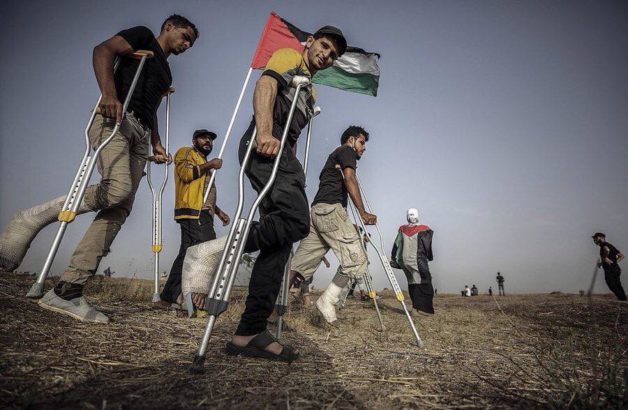 Participants in Gaza’s Great March of Return on the eighth Friday of the demonstration.

Gaza Palestinians plan for mass protests to end the blockade and occupation; call for supporters around the world to mobilize in solidarity

Protests marking two historic dates are planned along Israel’s massive “security fence” in Gaza June 5 and 8. June 5 is the 51st commemoration of the Israeli invasion and occupation of Gaza, the West Bank and East Jerusalem and on June 7 of the same year, Israel seized control over Jerusalem’s Old City. The committee of Palestinians coordinating the ongoing, mass protests in the Gaza Strip are calling on human rights advocates around the world to mobilize June 5 and 8 in solidarity.

The largest protest in Gaza (as well as in the West Bank) is planned for June 8, since that is a Friday. It also marks the 51st anniversary of the Israeli attack on the USS Liberty in international waters off the Gaza Strip. The intelligence ship was well-marked as an American vessel and only lightly armed. This particular anniversary is ironic, since the Israeli navy just attacked and seized a Palestinian vessel called the Liberty when it attempted to sail out of the Gaza harbor May 29.

“We urge all free people everywhere to join the Palestinians by organizing solidarity events to demand that their governments exert pressure on Israel to end its oppression and occupation of the Palestinian people,” said a statement from the Legal Committee of the National Commission for the Return and Breaking-the-Siege Marches. Specifically, the committee calls on activists to push for a ban on the supply of weapons to Israel and support the public boycott of Israeli products.

“As a nation under occupation, siege and apartheid rule, we need your help to end this oppression, including the blockade of Gaza imposed 12 years ago,” the statement concluded. “We need you to scream out against injustice and double standards and urge your governments to carry out their moral and legal duties to protect the civilians of Palestine.”

Ahmed Alnaouq, project manager for We Are Not Numbers, a youth project in Gaza, notes, “The media and agencies are publishing charts and graphics showing the number of dead and wounded, but it is critical to remember that each one of those numbers represents an unarmed human who had a story to which most of us—even those in the West—could relate. Our team has been busy trying to write those stories so the world cannot hide behind the anonymity of ‘collateral damage’.”

WeAreNotNumbers.org—a group of young adults in Gaza whose lives have been forced into a state of limbo by the world’s highest unemployment rate (60 percent among youth), a constant threat of war, a ban on most travel and shortages of electricity averaging 20 hours a day—has worked for the past three years to document the stories of the “silenced voices” in Gaza. Since March 30, when the massive, nonviolent protests began in Gaza, the team has produced regular stories and videos about the “human faces behind the numbers in the news”—including the 128 killed and 13,375 injured by Israeli snipers.

Working for Peace and Justice: Hebron Freedom Fund is a U.S. based 501c3 organization that supports the resiliency and nonviolent efforts of Palestinians living under the most difficult circumstances of Israel’s occupation.