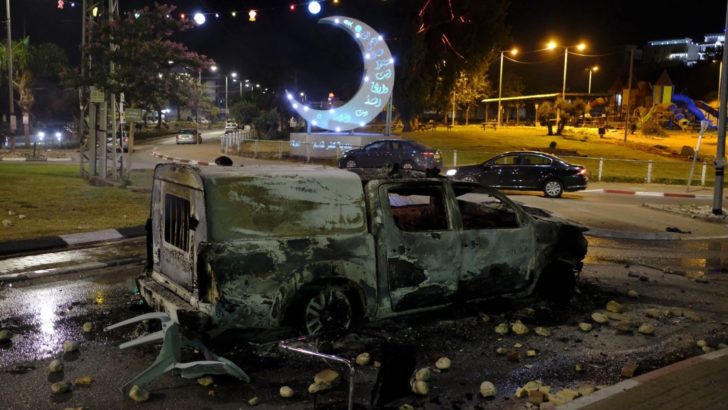 An Israeli security guard shot and killed 28-year-old Mahmoud Mahmoud Salim Taha, a Palestinian citizen of Israel, in Kafr Qasim on Monday night. Disturbances had broken out while police were arresting another resident of the town, and in the course of the clashes, a security guard at the police station opened fire on Taha.

Below are three comments on the incident.

Where else have protesters been shot and killed?

Over 30 Palestinian citizens of Israel have been killed in violent episodes since the start of the year, most of them shot dead. Arab and mixed towns across the country have, over the last few weeks, seen protests against police ineffectiveness against the increasing violence and murder rate in the community. Leaders and regular citizens have pleaded endlessly for the police to start properly tackling the organized crime and hoards of weapons that threaten Palestinian society.

There is also Palestinians’ complete lack of faith in the authorities, above all the police. And that lack of faith is justified: 48 Palestinian citizens of Israel have been shot and killed by police since 2000, according to Mossawa Center — The Advocacy Center for Arab Citizens in Israel.

Monday night’s incident in Kafr Qasim, which came less than six months after the deadly events in Umm al-Hiran, is yet another assault by police on already frail relations.

On the one hand the police talk about creating trust; on the other, they behave, at best, like a bull in a china shop, and routinely treat Arab citizens like the enemy. When do they ever shoot other protesters, even if they throw stones and burn cars? Without minimizing the police violence against ultra-Orthodox protesters in Jerusalem over the last few weeks, not a single officer drew their weapon and opened fire, even as the police put out dramatic statements about ultra-Orthodox rioting and stone-throwing. And rightly so.

As long as the police don’t change their perception of Palestinians, no cosmetic plan to improve relations will work. But change is unlikely as long as the police commissioner is an ex-Shin Bet Netanyahu ally, who shares the prime minister’s belief that — unless proven otherwise — all Arabs are ISIS.

Public Security Minister Gilad Erdan continues to act like a spokesperson for the police. Speaking on Tuesday morning about the incident in Kafr Qasim, he said: “No claim against the Israel Police justifies violence against police officers and the torching of police cars, to the extent that they feel their lives are in danger. Nowhere normal would see a police arrest justify dozens or hundreds of people trying to violently prize the arrestee from the officers.”

However, since he was never held publicly accountable for his despicable behavior following the killing of Yacoub Abu al-Qi’an in the Bedouin village of Umm al-Hiran in January, Erdan is allowing himself to revert to the same behavioral patterns: backing the police and armed security forces before the incident has even been investigated.

Once upon a time, the position Erdan holds was called the “Minister of Police.” The semantic change to “Public Security Minister” was meant to reflect a deep, moral change in the position itself: no longer would the minister represent the police and its interests in the government; instead, it would represent the security of the citizens. Citizens such as Yacoub Abu al-Qi’an and Muhammad Mahmoud Salim Taha. Even if all the details of the incident have yet to come to light, a citizen killed by police during clashes is a severe issue. Erdan’s claim that the violence overnight was “life threatening” is an attempt to create facts on the ground, way before they are even investigated.

This is reminiscent of the way Erdan labeled Abu al-Qi’an a “terrorist” long before anyone knew what had happened in Umm al-Hiran, and his insistence on continuing to label him as such even after it became clear that the police had blatantly lied. If Erdan already knows to say that Taha’s death stemmed from a “life-threatening feeling,” then he has absolved himself of any responsibility, rendering the investigation superfluous before it even started. Back to the good old days of the Minister of Police.

Be the results as they may, Gilad Erdan, who has lost all credibility and soundness of judgement, cannot be the minister who oversees this investigation.

Rela Mazali, who runs Gun Free Kitchen Table, an Israeli coalition of groups that seeks to restrict security guards from bringing home their guns from their work sites, explains: “The role of securing Israeli police stations is often placed in the hands of private security companies. That is, the police, which is meant to ensure public security, is not protecting itself. This is one of the ways in which the police and state itself absolve themselves of responsibility and accountability for using organized violence.”

The fact that the police are protected by civilians, who unlike police officers are untrained, and who are not subject to the same regulations, ensures that when the moment arises, security officers will simply not know how to act properly, and will quickly feel that they are “in danger.”