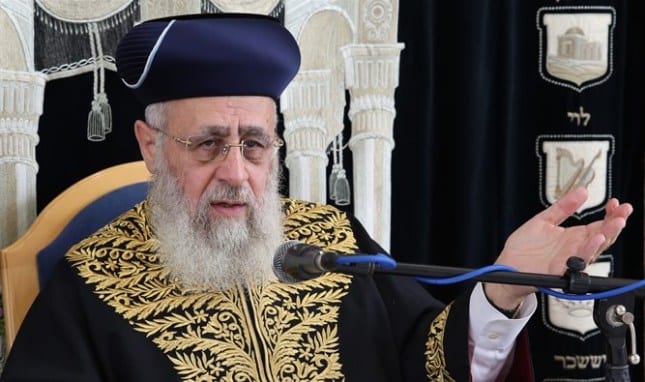 The Israeli chief Sephardic rabbi, Yitzhak Yosef,  told a gathering of followers that non-Jews should be expelled from Israel (Hebrew here). The only exception, he said, would be in the cases of non-Jews who accepted the seven Noahide laws.

The rabbi’s intent is to expel the largest non-Jewish population in Israel, Palestinian Arabs. He also said that those non-Jews who did accept the Noahide laws and remained in the Israel, would primarily serve Jews. Their role would be akin to slaves and servants in colonial regimes.

The chief Rabbi acknowledged that Israel was currently not in a position to execute this plan; primarily because of the resistance to it from the non-Jewish world. However, he said that in the time of the messiah Israel would be in a position to implement this plan. And he looked forward to the Messianic era with great joy and anticipation.

Yosef also reminded his followers that any Palestinian armed with any weapon was worth killing without hesitation (“he who seeks to kill you, rise up before and kill him first”).  He was tacitly criticizing the IDF chief of staff who’d told an audience last week that Orthodox reasoning that killing any Palestinian no matter how small the threat posed was unacceptable.  He did not want, he said, to see his soldiers emptying their bullet chambers on Palestinians wielding scissors.  Rabbi Yosef’s religious reasoning reverts back to the most primitive “eye for an eye” thinking which Jews haven’t used as their operative principle in thousands of years.

Expulsion of Palestinians accords with those of the former Chief Ashkenazi, Jonah Metzger, who said that non-Jews, meaning Palestinian Muslims, should be expelled from Israel to Egypt. He said that the Sinai would be a perfect place to send them, since it was underpopulated. He suggested that Palestinian genius would make the desert bloom “like Arizona.” He even generously offered Israeli assistance in resettling what would be Israeli Palestinian refugees.

Yosef, is the son of the former Sephardi chief Rabbi Ovadia Yosef. Before he died, the latter said that non-Jews in Israel served only one useful purpose. He likened them to donkeys who served their masters as beasts of burden.

Some may argue that these figures are marginal in Israeli society.  However Rabbi Yosef is not just the chief Sephardic Rabbi, but also a spiritual leader of one of Israel’s major political parties, Shas. As such, he wields considerable power in Israeli society. Israel, which was once a largely secular society, has become increasingly theocratic.

We should also keep in mind that societies which were once liberal and humane one minute, turned into something quite different and uglier the next. As examples, we should look to our own country under Trump and Hungary under Viktor Orban. Civilization and tolerance can disappear in a heartbeat.  It’s especially troubling when religion is the champion of such brutalism.

There may be those encouraged by this to claim that these interpretations represent Judaism in full.  Not so.  They are not arbiters of Judaism for millions of the rest of us who do not ascribe to these views.  But since there are hundreds of thousands, if not millions who do follow them, their views are worth portraying. [Originally published by Tikun Olam.]

Richard Silverstein writes Tikun Olam, one of the earliest progressive Jewish blogs.  It focuses on exposing the excesses of the Israeli national security state. In his words, “I have been interested in the Israeli-Palestinian conflict since 1967 and have worked all my adult life to promote dialogue and mutual recognition. I am a progressive (critical) Zionist. I support Israeli withdrawal to pre-67 borders, the sharing of Jerusalem, a Law of Return that applies equally to Jews and Palestinian refugees seeking to immigrate, and an internationally-guaranteed peace agreement with the Palestinians.”

The Extremist Origins of Education and Sharing Day: Why is the US Honoring a Racist Rabbi?

What Our Taxes to Israel are Funding