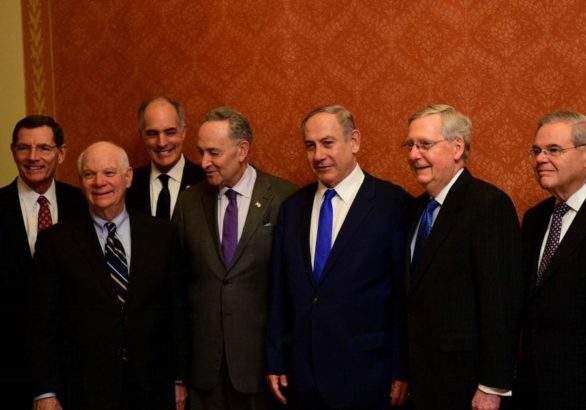 JTA reports that the US Senate approved a “non-binding resolution marking the 50th anniversary of the reunification of Jerusalem.” The bill was approved by a 90-0 vote (with ten absent) on Thursday, June 1st, the anniversary of Israel’s takeover of East Jerusalem in 1967.

The bill, sponsored by Sens. Mitch McConnell (R-Ky) and Chuck Schumer (D-N.Y), pressures President Donald Trump to move the US embassy from Tel Aviv to Jerusalem. He is hesitant to do so, citing security concerns. Previous presidents have done the same thing for the same reason.

While Israel and the pro-Israel lobby celebrate Jerusalem’s “reunification”, the Guardian points out that this “characterization [is] rejected by most of the international community, which does not recognize Israeli sovereignty over the captured territories.”

Zeid Ra’ad al-Hussein, UN High Commissioner for Human Rights, said the anniversary is a reminder to the Palestinian people of “a half-century of deep suffering under an occupation imposed by military force.” He also warned, “Maintain the occupation, and for both peoples there will only be a prolongation of immense pain.”

Top photo: Netanyahu and US Congress members, including Senator Chuck Schumer next to the prime minister on the left. (photo credit:AVI OHAYON – GPO) Schumer is a long and devoted supporter of Israel (see video here).