You Are Here: Home → Was Israel Under Existential Threat in June 1967?

Was Israel Under Existential Threat in June 1967? 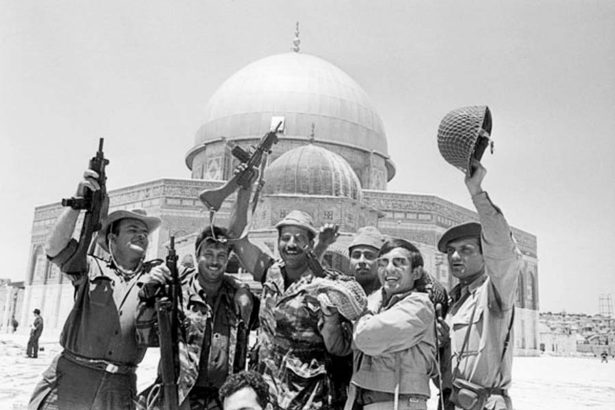 Up to June 1967, a border separated Jews living in Israel and Palestinians residing in the West Bank and Gaza. The Six Day War, which occurred exactly fifty years ago, erased that line. Israel has been occupying these territories ever since. This has been the source of an endless conflict between Jews and Arabs. Who started that war? Having won the war, Israel set out to give an answer to that question which would suit its needs.

To cement its hold over the new territories Israel had sought to mold the story of the Six Day. The attempt to frame the debate started on the first day of the war when Israeli state media claimed that the army had launched an attack to forestall the advancement of Arab tanks and jets toward Israel’s borders. However, on 5 June, the day war started, Arab forces were static. It was Israel that opened the war with a stealth air attack that caught Arab air forces unawares. Israel used the element of surprise to bomb Arab aircraft while they were on the ground. This was they key to its resounding victory.

When that became known, Israel responded with another gambit. It leaked Arab documents captured during the war. These were contingency plans which elaborated on air and land attacks against Israel. The implication was clear: had Israel not attacked, the Arabs would have. Were the Arabs to do so, they could have wiped off the Israeli air forces at the beginning of the war. The result could have been catastrophic to the Jewish state. The first to popularize this version were three Newsweek journalists – Robert Littell, Richard Chesenoff and Edward Klein – who wrote in 1969 a novel titled “If Israel Lost the War.” Purporting to be a counterfactual history, the novel claimed that the Arabs could have done to Israel what Israel did to them. According to Littell et al., the world, including the US, would have watched Israel’s obliteration with indifference. The Arabs would have then used their victory to slaughter the Jews, rape their women and inflict a brutal occupation.

This version of events has been supported by Michael Oren, who published in 2002 a new history of the war. Oren, who currently serves as Deputy Minister in the Israeli government, averred that on 27 May Egypt was on the verge of launching an aerial attack against Israel, which was canceled at the very last minute due to an American ultimatum. Oren, however, based his claim on a testimony made by the Commander of the Egyptian air force during the war; a man who had a strong interest to lie in order to minimize his responsibility for Egypt’s defeat.

Moreover, this storyline has been challenged by none other than Yitzchak Rabin. In 1968, Rabin, the Chief of Staff during the June 1967 War, told a French journalist that: “The two divisions that [Gamal Abd al-]Nasser [the Egyptian President]  sent to Sinai on May 14 [1967], would not have been enough to unleash an offensive against Israel. He knew it and we knew it.” Ezer Weitzman, who served as Rabin’s deputy in 1967, told a newspaper that “there was never a danger of extermination.” Likewise, Mati Peled, the head of logistics at the time of the war, penned an article in 1972 in which he maintained that the claim that Israel was under existential threat in 1967 was “a bluff born and developed only after the war.” Years later, a member of the 1967 cabinet, Menachem Begin argued that “the Egyptian army concentrations in the Sinai approaches do not prove that Nasser was really about to attack us. We must be honest with ourselves. We decided to attack him.”

How could these public officials be so sure? Because they read the intelligence reports. These showed that a successful Arab attack would have been implausible. True, Syrian, Jordanian and Egyptians troops were amassed on Israel’s borders in June 1967. However, these armies were trained and equipped for defense purposes only. The Soviets, the patrons of Syria and Egypt, had built massive lines of fortifications in the border areas and it would have been a folly for Arab troops to desert them. According to Israeli and American reports, throughout the month-long crisis that preceded the war, Arab armies were deployed in a defensive posture.

Syria and Egypt indeed had contingency plans to attack Israel, but their armies never trained in how to execute them. This was revealed during the war when Syrian tanks failed to reach their pre-jump positions because no one bothered to find out whether the bridges over the Jordan river were as wide as the Soviet-made tanks (they were not).

Furthermore, a third of the Egyptian army, the largest in the Arab world, was in Yemen, serving Nasser’s hegemonic ambitions. Many of the troops sent to Sinai consisted of poorly trained Egyptian reserve soldiers. They were thrown into the desert by a corrupt dictatorship without uniforms, weapons or maps. Israeli eavesdroppers could hear them, cry out over the radio to their superiors, begging for a supply of water and food.

In addition, the Egyptian air force would not have been able to launch a surprise attack against Israeli airfields because most of its jets did not have enough range. It had only one squadron of heavy bombers, which never trained in how to fly at low altitude; something that could have helped them to evade Israeli radars.

The Syrian army could not be of much help either, as it was torn apart by ethnic tensions. The Jordanian army was simply too small to fight on its own. The Arab military coalition that converged on Israel borders in June 1967 was less than the sum of its part.

For Israel, the Six Day War was a war of choice. It did not have to fight it. The main reason that Israel went to war was the incessant pressure that the general staff applied on the cabinet. Israeli generals sensed the enemy’s immense weakness and wanted to use this opportunity to strike a deadly blow. For over a decade, the Israeli army had perfected plans for a swift offensive that would allow it to conquer significant chunks of Arab territory. Another key aim of Israeli war plans was to trap Egyptian forces in northern Sinai and turn that area into a killing zone. Peled, the Israeli general, let the cat out of the bag four decades ago when he wrote: “When we were mobilizing all out forces… this power was necessary to eliminate definitively the Egyptians.”

Israeli planning and preparations paid off during the war. The victory, though, proved to be a devastating one. Israel has never recuperated from it. Fifty years after, much of the Jewish state’s energies are devoted to maintaining the brutal occupation of the West Bank and Gaza. And the protracted debate about whether to continue and hold these territories tears Israel’s society apart.

Guy Laron is Senior Lecturer in International Relations Department at Hebrew University of Jerusalem and author of “The Six Day War: The Breaking of the Middle East” (Yale UP, 2017). Originally published in Counterpunch.

The Six Day War and Israeli Lies: What I Saw at the CIA