You Are Here: Home → The Relentless Pulse of Pro-Israel Propaganda in Our Lives: Tim Sanders’ BBC documentary misleads listeners 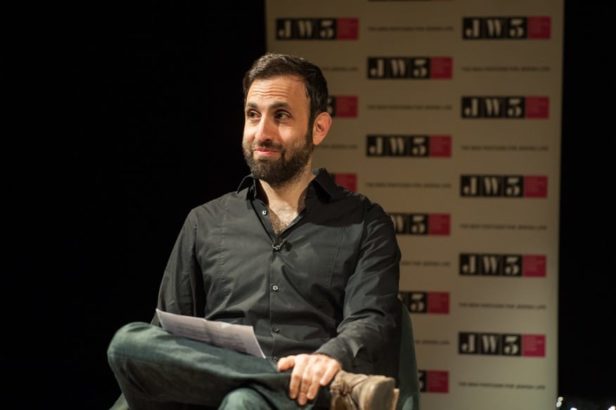 Tim Samuels, speaking at at JW3 (London’s Jewish Community Centre and Arts Venue), discusses his time living on an Israeli kibbutz and says: “Even if you are an atheist Jew, a cultural Jew, that Jewishness still runs through you.” –Times of Israel

There are times when one can only nod in admiration the ability of Israel and its small but influential set of supporters around the world to implant wholly deceptive and self-serving narratives at the highest levels of the western media system.

Two nights ago, while crawling along the darkened byways of the Hudson Valley, I happened upon a BBC radio documentary produced in April called Tim Samuels’ Sleepover: Inside the Israeli Hospital in which a British reporter with strong Zionist ties, if not deep-seated Zionist beliefs, (article here) tells the heartwarming story of how Israeli doctors operating at Ziv  Medical Center in Galilee selflessly and disinterestedly repair guerrillas and assorted other people  fleeing from the Syrian Civil  War.

The half-hour piece opens with gentle and plaintive piano music and then moves quickly to an interview with a Russian-born physician at the hospital, Dr. Lerner, who is described by our reporter as a “dapper doctor with kindly eyes”.  We are subsequently told of his “irrepressible energy” and his “reassuring mustache and smile”.

We then follow him as he describes the many ways in which the doctors at Ziv have served the poor Syrians fleeing from the festival of savagery just across the border in Syria.  We are subsequently treated to interviews with grateful Syrian guerillas who detail the terrible crimes of the Assad regime—no crimes of ISIS or the numerous other, mostly Islamist, guerilla groups being supported in one way or another by the US, Israel and Saudi Arabia are ever mentioned—and who, when prodded by the reporter,  recount how they have come to realize what wonderful humanitarians the Israelis can sometimes be.  We even hear about what beautiful views of the Dead Sea the fortunate Syrians have from their rooms at Ziv.

Shortly thereafter, listen to the views of an Israeli-Arab doctor and Israeli-Arab social worker who work at Ziv with the smiley-eyed Russian-born doctor.  Much like the segregation-era Southern whites who talked about their black mammies being part of the family, our intrepid reporter tells us how, in what we are meant to believe is the fluidly democratic and multicultural state of Israel, it is  “no big deal” to have such people working side-by-side with Jews at the same humanitarian tasks.

To his credit, our reporter does not edit out the Palestinian doctor’s very pointed demurral and then subsequent, subtly-phrased doubts,  when asked about Israeli motives for providing such fulsome help to these fleeing Syrians.

What’s wholly lacking, of course, is any reflection upon why the native-born Palestinian doctor, living in the “only democracy in the Middle East”, would, unlike his Jewish colleagues born in far off lands, feel so inhibited about expressing the full depth  of his opinions on air to a BBC reporter.

We are then taken up to the “Israel-Syrian border” where we hear the sirens announcing the arrival of injured soldiers from Syria who will be subsequently taken down to Ziv for treatment.

No mention of course, of the fact the Israeli side of what our reporter calls Israel-Syrian border is not, in all likelihood, Israel at all, but rather Syrian land of the Golan Heights illegally occupied by Israel for 50 years.

In the course of his visit to the area, the reporter tells us that the matter of how the Israelis know exactly when an injured Syrian rebel will be coming over the border for treatment are kept “deliberately vague to protect those on the ground”.   That, of course, is a nice way of NOT talking about the fact that Israeli intelligence is deeply implicated supporting the mostly Islamist fighter cadres on the other side of the illegally established border.

As the Syrian wounded come over the “border”, our reporter talks with the young Israel officer leading the triage operation and asks (no leading questions here!):  “Are you happy to risk your safety and go up to the border and bring it wounded Syrians?”  He issues a quick “yes”, again reminding us for the extraordinary Israeli penchant for selfless sacrifice in the service of all humanity, regardless of national origin or the country’s strategic interests. The soldier’s soliloquy fades out into melodramatic background music that has accompanied us during much of our overnight sojourn with Mr. Samuels in the hospital.

The next segment opens with the sounds of birds tweeting in the backyard garden of an Australian-born Israeli physician, Dr. Harari. We learn how he is spreading Israeli medical goodness beyond the treatment for anti-Assad warriors   to include a small number of medically needy Syrian children.   We sit in on his meeting with a grateful Syrian mother, who, as if on cue in the middle of the conversation, suggests with a slashing movement across her throat that she will be killed by the Syrian government if it is learned she has brought her children to Israel for treatment.

The good doctor goes on to tell of us of how, in an Israel where marriage between Jews and Arabs is routinely and often brutally discouraged, where Arab parliamentarians are routinely shouted down and threatened with arrest or suspension for speaking their minds in public and where the inclusion of two Bosnian Muslims on the Beitar Jerusalem football club caused the majority of the team’s fans to boycott it games, there is an ironclad social consensus regarding the need to use scarce medical resources to treat wounded Syrians  in the country’s  hospitals.   And then, in a long peroration, Dr Harari assures us that there is no absolutely political intention behind any of his hospital’s work with the Syrians in Galilee.

Having cleared up that matter, we are taken to a post-op interview in which a Syrian fighter, surrounded by the reporter and the good Israeli doctors, tell us how much better his leg feels with and Israeli-designed screw in it than the previously implanted Syrian one.

Near the end of the 27 minute piece, however, our reporter suddenly expresses some doubts about the purity of moral purpose among Israelis that he has just spent the previous 25 minutes telling us about in vivid and sympathetic terms against the backdrop of syrupy background music.

He asks himself if there could be more to this than meet the eye, or  if he might have failed to pick up on  certain hidden motives.

If ever there was a time to go back for another sit-down with that self-censoring Israeli-Palestinian doctor we met earlier in the story, this  would appear to be it.

But, of course, doing that, or worse yet, mentioning the numerous reports of high-level Israeli officials spilling the beans and openly admitting country’s strategic goal in Syria is the promotion of an open-ended civil war designed to render the country impotent for years to come might run the risk of ruining  his carefully crafted story line and make a mockery of its touching musical accompaniment.

And with facts alike these out in the open, people might begin to see that treating Syrian jihadis crossing into “northern Israel” for what it is:  an integral part of Israel’s cold-blooded plan to prolong the bloody Syrian civil war, much in the way the US cynically prolonged Iran-Iraq war by providing arms and “humanitarian” aid to Saddam Hussein while also helping the Iranians to continue to fight.

So where does our intrepid reporter turn in his last-minute moment of doubt for the effective “last word” of his broadcast?

To  “a former national security advisor to the prime minister, Major General Yaakov Amidror”,  of course. 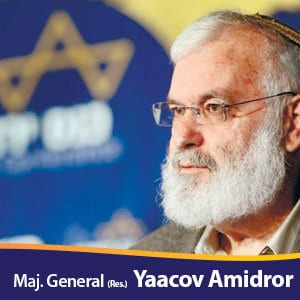 Who is Yaakov Amidror? He is a member of the ultra-right and blatantly racist Israel Home party who once referred to secular Israelis as  “Hebrew-speaking gentiles”.

And so what does this paragon of non-tribal universal human values tell our suddenly and belatedly doubtful British Zionist reporter?

That his story line is (whew!) essentially right, that despite the present savagery of the Arabs, Israel is hoping that its selfless humanity will serve as down payment on a better more peaceful world in the future.

The final fade out is a scene of our Australian-born Israeli doctor sharing a warm and fond farewell with the mother of the Syrian children he has treated.

And with this, the propagandistic masterpiece is complete.

Left enhanced is the aura is the myth of Israel’s morally superior multicultural democracy, and  with it, the reality of Arab (and more specifically Assad-sponsored) savagery on one hand, and Arab dependence on western goodness (not mention superior Israeli medical prosthetics!)  on the other.

All explanations of larger historical and structural realities, not to mention present-day Israeli strategic initiatives and the out and out racism of the “expert” enjoying the last word on the issue at hand are completely suppressed.

After listening to this report, the western consumer of media can once again go to bed secure that his tax dollars and political influence are still working on the side of the angels in that oh-so-complicated set of conflicts in the Middle East.