You Are Here: Home → #IStandWithAlisonWeir is trending as the Twittersphere supports justice and free speech 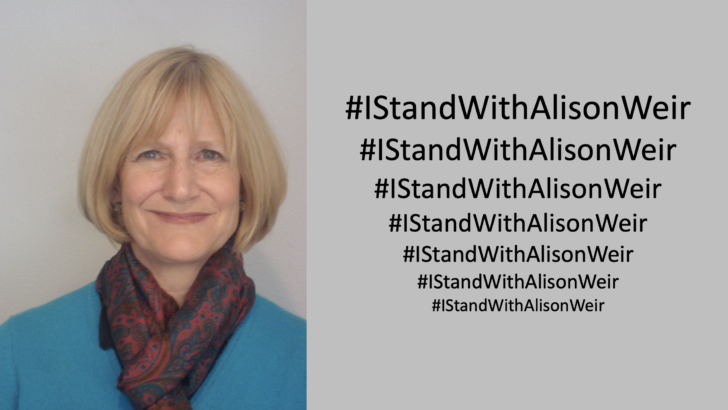 Powerful Zionist organizations are trying to shut down Alison Weir’s Fresno lecture on September 18th, but Twitter is having none of it.

With over 1 million impressions as of Monday morning, it’s clear that Twitter users are not buying the smear campaign peddled by ADL and other powerful orgs bent on silencing Alison Weir as she calls for justice for Palestinians.

By now, it’s common knowledge that activist and writer Alison Weir will be speaking about Israel’s occupation of Palestine on Wednesday, September 18th. The lecture will take place from 6:00-7:30 pm at the Clovis Community College Forum Hall, 10309 N. Willow Av, Fresno, CA.

The event began as a small-scale lecture at a community college, but grew to prominence when several global pro-Israel organizations began pressuring the college and the event organizers to cancel the event.

The pressure has led to a Twitterstorm using the hashtag #IStandWithAlisonWeir (created by Mary Hughes-Thompson – Twitter handle: @Mariapalestina), which has now been seen by over 1.1 million people spanning four continents, according to Keyhole.

The organizer of the event – local news organization GV Wire – stated on its website, “We welcome thoughtful debate on this subject and this speaker, as well as any of the topics we cover. Our hope is that audience members will reach their own conclusions based on the information presented.”

Speaker Alison Weir explains the reason for the attacks: “these Israel advocacy groups don’t want people to learn the facts I provide in my talks. The reality is that numerous human rights groups have documented Israeli war crimes, including Human Rights Watch, Amnesty International, Christian Aid, B’Tselem (an Israeli NGO), the International Red Cross, Physicians for Human Rights, Reporters Without Borders, Foreign Service Journal, and even the U.S. State Department.”

Not covered by mainstream media

GV Wire asserts, “Our goal is to provide different perspectives than those customarily provided by the mainstream media on issues of global concern.”

Alison Weir undoubtedly meets this criterion: her organization, If Americans Knew, (website, blog) exists for the sole purpose of “inform[ing] and educat[ing] the American public on issues of major significance that are unreported, underreported, or misreported in the American media.”

Weir explains, “Pro-Israel groups don’t want Americans to learn that we give Israel over $10 million per day – over $7,000 per minute – in aid that is used to maintain a brutal and illegal occupation, incarcerate children, and sustain a racist, settler colonial enterprise.”

The massive Twitter response to Weir’s lecture is engaging users around the world and functioning as a mass invitation to the event, which is free and open to the public. The Twitter storm has elicited comments like:

“The Fact that you are Under attack by Gangster Zionists Shows that You are on the Right Side. Keep Fighting, the world is Awake and Support you.”

“Same reasons for denying @IlhanMN and @RashidaTlaib visits to the oPt. Israel wants to keep their human rights violations hidden. Fortunately, the truth always bubbles up. Alison Weir will be speaking truth to power on Sept 18th, I hope many are in attendance to hear her speak.”

“This shows how low zionists go all the time, when they can’t just spin facts and the reality of their crimes! WITH YOU 100% Alison! You are a true Hero!”

Thousands of views on Facebook have also spread news of the September 18 event far and wide, with comments on GV Wire’s FB page like,

“Much respect and gratitude is due for inviting Alison Weir. to your community. Her integrity, compassion, professionalism and courage as a journalist are exemplary.”

“I fully support Alison Weir’s upcoming talk at Clovis Community College in Fresno. Please make it happen and do not succumb to Israel partisans! It is very important that Ms. Weir give her talk. Thank you!”

“Thanks for hosting this event. Alison Weir is a true American patriot who provides an honest well researched analysis of our middle-east policies.”

Groups opposing Alison Weir’s September 18 lecture in Fresno include the American Jewish Committee (AJC) – a global organization with thirty offices worldwide and net assets of almost $158 million, the Anti-Defamation League (ADL – with $81 million in assets), and StandWithUs (annual revenue: $12 million). A director of the Wiesenthal Center, another global organization (with assets of $54 million) has taken a stand as well.

Weir asserts, “these organizations have attempted to dig up dirt on me and label me anti-Semitic. Their accusations are unfounded, as they know. I stand for justice and equality, and I condemn all types of racism, including anti-Semitism. I hope people who live in the Fresno-Clovis area will come to hear me for themselves and make their own decisions.”