You Are Here: Home → Weir says ADL claims against her are intended to hide Israeli crimes 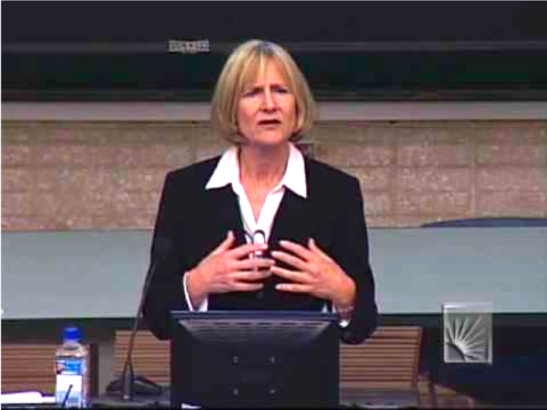 Alison Weir speaks at Case Western Reserve University on the topic of “Israel-Palestine: Beyond the Headlines.”

As the Jewish Anti-Defamation League and American Jewish Committee try to shut down activist Alison Weir’s upcoming event at Clovis Community College in Fresno CA, she explains what it is the groups are trying to hide.

Alison Weir, who will be speaking at Clovis Community College on September 18th, says that recent claims against her are intended to block people from learning the truth about Israel-Palestine.

“When you want to block the message, you shoot the messenger,” Weir says.

“Israel advocacy groups like the ADL and American Jewish committee don’t want people to learn the facts I provide in my talks.

In addition, Weir asserts, “Pro-Israel groups don’t want Americans to learn that we give Israel over $10 million per day – over $7,000 per minute.”

In fact, Weir explains, a package currently before Congress is slated to give Israel a minimum of $38 billion over the next ten years – approximately $23,000 per Jewish Israeli family of four.

Weir began to learn about Israel-Palestine when she traveled as a freelance reporter throughout Gaza and the West Bank in early 2001, at the height of the Palestinian uprising.

When she returned, she began the nonprofit organization, If Americans Knew, to give Americans the facts on the issue.

While pro-Israel groups and individuals have frequently attacked Weir (she received a death threat after an event at UC Berkeley), many others have praised her work.

The New York Times reported on a talk by Weir in Connecticut: “When the speech ended, Ms. Weir was met with thunderous applause, and across the room there was a widespread sense of satisfaction that someone was saying what needed to be said.”

At Illinois College she received an award for being a “Courageous journalist-lecturer on behalf of human rights.”

Former California Congressman Tom Campbell said of one of her first public presentations: “Ms. Weir presents a powerful, well documented view of the Middle East today. She is intelligent, careful, and critical.”

Weir says the claims against her are fraudulent. “They call me names, falsify the facts, and misrepresent who I am and what I do. I have a life history of opposing all bigotry.”

Weir says she is proud of her many articles and her book on the Israel lobby, an Amazon best seller.

“I hope all the attention generated by the attacks on me will motivate people to read what I’ve written,” Weir says.

Weir explains that calling a person “antisemitic” is a standard tactic by pro-Israel organizations. Several years ago a former Israeli official told Amy Goodman on Democracy Now: “It’s a trick, we always use it.”

“The ADL has even produced a manual about how to shut down events about Palestine on college campuses,” Weir says.

“They regularly defame people who believe in human rights and justice for Palestinians,” Weir says, “because they know none of us have the financial resources to go up against them.

“They’ve been using this power to bully Clovis Community College, to try to intimidate me, and to try to prevent people from attending my talk.

“But the college hasn’t canceled the event as the ADL and AJC had desired, and I haven’t been scared off. I hope the people of Clovis and Fresno will come to hear me for themselves.”

Media wishing more information or to interview Weir should email media@ifamericansknew.org and phone 202-631-4060 (leave a short message and we’ll call you back).

Why are global organizations attacking a talk in small town of Clovis CA?

Video of Interview with Alison Weir